To Cover or not to Cover 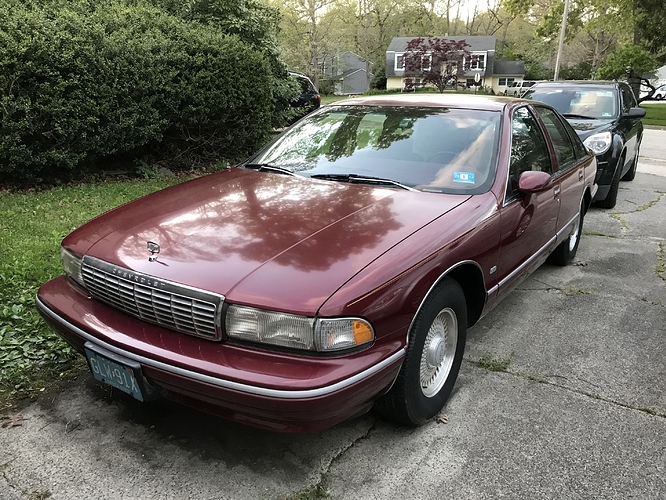 I don’t mind putting a coat of wax on the top of the car every week or so, but I do need to protect the interior. The windshield and rear window are so big that most folding sunshades are too small. Any suggestions would be appreciated.

Now I must go wax it and change the oil in the 90 degree heat.

I am trying to picture what the car and cover would look like after 7 years outside at my house. I bought a gas grill and a “Lifetime Guaranteed” cover a few years ago. The next spring I sent the company in Texas a picture of the tattered, torn and faded cover. They ca;;ed me and asked me if I would rather have my money back as their cover would not stand up pur winter. I also have solid concrete pavers piled up in the bottom of the grill to stop it from going over in the wind, only happens once or twice a year now.

I had a wood stockade fence that sat 90 degrees to the prevailing wind. The wind kept snapping the 4X4 posts off at ground level so I had to put posts in every 4 ’ instead of 8.

On a daily driver I sure wouldn’t start covering it. Garages are good, carports if nothing else, better than nothing and cheaper. They have these portable tent like structures now for a few hundred that would be easier than a cover but neighbors may not like them and may not be allowed in the neighborhood. A car sitting outside though with a cover on it is kind of an eye sore.

Here too. I covered a car outside once. Bought the fancy hi-tech version. Impervious to everything and gauranteed for all time eternal

Covered a 1991 Corvette one summer and uncovered it the next summer. It was sitting on asphalt driveway next to a garage.

The smile faded pretty quick when I was greeted to moldy carpet, seats and dash. The cover trapped moisture a bit too well. What a disaster!

We get wind coming around the corner of the house with some surprising speed and power. One morning I found the glass top to a patio table a couple feet off to the side leaning perfectly against a granite slab topped rock wall. As if someone had been messing around. It takes two people to lift this huge rectangle of very thick glass. Now it’s leaning against the sharp edge of the 4" thick granite cap stone. Wtf? Not a scratch on it. Put it back. Two weeks later we got another storm. Found it 3’ away, shattered into a million pieces. Still finding pieces falling out of the rocks once in awhile.

Unless the car is washed each time before you cover it, you’ll be getting the inside of the cover dirty and dragging dirt across the car as you work with the cover, so I’d vote against that.

The place that may be the only shopping place left someday ( Amazon . com ) has really large windshield covers for a lousy 13.00 and they can be called four season .

My brother’s mother-in-law lives at his house . . . he was forced to convert the garage to living space when she drove up with not a penny to her name

the mother-in-law uses a car cover . . . supposedly expensive custom-fit for her particular car

One day she complained that her car stunk

Turns out the car cover was out-gassing, and the smell got inside the car, and it actually permeated a few things

The “funniest” thing about the whole scenario . . .

Now nobody can use the garage to park a car, store things, etc.

My brother and his wife have to park one of THEIR cars in front of the curb, because mom-in-law claimed the driveway as her designated parking spot. Every time she parks the car, the car cover goes back on

I’d be parking my car next to her bed. Bet she’d find a way to move along then…

I’ll pass the suggestion on to my brother . . .

Appreciate the suggestions, I was under the car on the weekend and saw a bit more rust than I liked, especially on the calipers. I think I’m going to pass on a cover and use sunshades in the front and rear windows. I may order a set of window deflectors from Weathertech so I can leave the windows cracked open for ventilation. I was surprised Weathertech has a set for the Caprice. I have the deflectors on my daily driver.