To buy another 1972 Oldsmobile Ninety-Eight?

What do you think about this car? I’ve owned 2 and am thinking of getting another.

What do you think about this car? I’ve owned 2 and am thinking of getting another.

I think it is old. You have had 2 so that makes you the expert.

I would love a low mileage concours condition 98 convertible or its stablemate a 225.

What with the new tariffs on steel it may be worth more as scrap.

The key question for the OP is…
Do you plan to use that 46 year old car as a daily driver, OR as a vehicle to use only on an occasional basis, for limited amounts of mileage, and when the sun is shining and no bad weather is predicted?

When did you own the last one? You’ll need either a well-equipped garage and the abilities, or a knowledgeable mechanic to keep it reliably on the road. I like their looks: 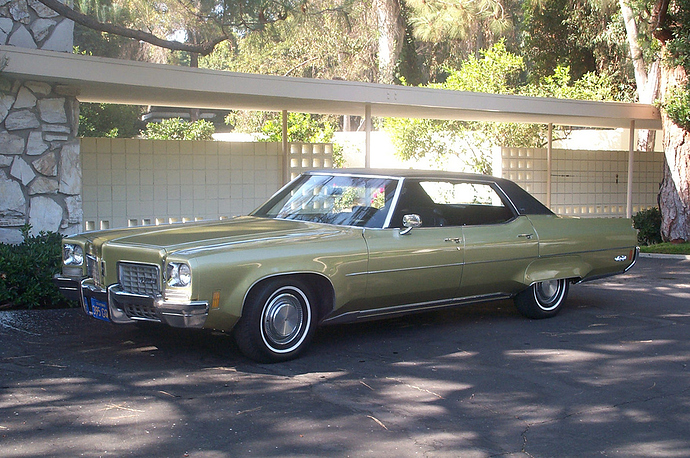 You’ll need either a well-equipped garage and the abilities

Or a larger garage. That car will NOT fit in my garage, unless I don’t close the garage door.

Thanks, I guess I am.

So much for classics and antiques.

It would be for show and an occasional drive only.

The late, great Len Frank, responding to a caller who wanted her next car to last forever, told her she didn’t, that cars improve so much over time you really don’t want the old technology. He told her that she could drive a Model T as long as she wanted if she knew a blacksmith.

What happened to your first 2? If they’re still working, you just want a third, it’s a good idea. If they aren’t, that means you can’t fix it, which means you probably won’t keep this one running long. I have a 30-year-old car that runs as well as new; I expect to keep it another 16 years (by which time I’ll be the defective component.) If you or someone you know can do the work, you can keep it running; if you’ve been through 2 others would mean you don’t.

What do you think about this car?

I love them. As far as Ninety-Eights go, my 1965 had the most legroom, the 1969 was the most powerful, and the 1973 had the nicest ride and brakes. I’m a big fan of Oldsmobile engines of that era, long stroke slow turning engines run smooth and quiet. 1970 and earlier are the years to look for, 1970 was the last year of high compression ratios. Disc brakes became standard in 1970 as well.

Thank you for the info. I love Olds too.

I either wrecked an Olds or sold it. I’ve had seven of them. I am
capable of maintaining and repairing them as well.
So far, most of the replies have been, what do you want with an old
beater like that. I think of old cars as museum pieces and history. My
problem is, I can only afford one at a time, I fix them up then sell
them. I am old now so this will be my last older car, I will keep it
until I die.

I wouldn’t mind an Electra or an Imperial. I have my eye on a 1976
Imperial. Right now, I have a 1985 LTD Country Squire and a 1972 Olds,
Ninety Eight Coupe, both low miles and good running condition.

I fix them up then sell them.

That’s very different. You should have said so in the first place. Once you put it that way, I’m surprised you asked.

I had a 72 Electra 225, prefer the Buick styling over its Cadillac/Olds siblings. But that’s a personal choice.
Would have kept it longer but the Florida salt air rusted holes in the roof under the vinyl top.

That’s the trouble with vinyl roofs, sun and water damage. You notice
they don’t make them anymore.