…will be unveiled shortly, but it appears to be truly…over the top.

I guess that this vehicle has to go on my wish list, when I win the lottery.
Of course, I would first have to start buying lottery tickets… ;-)) 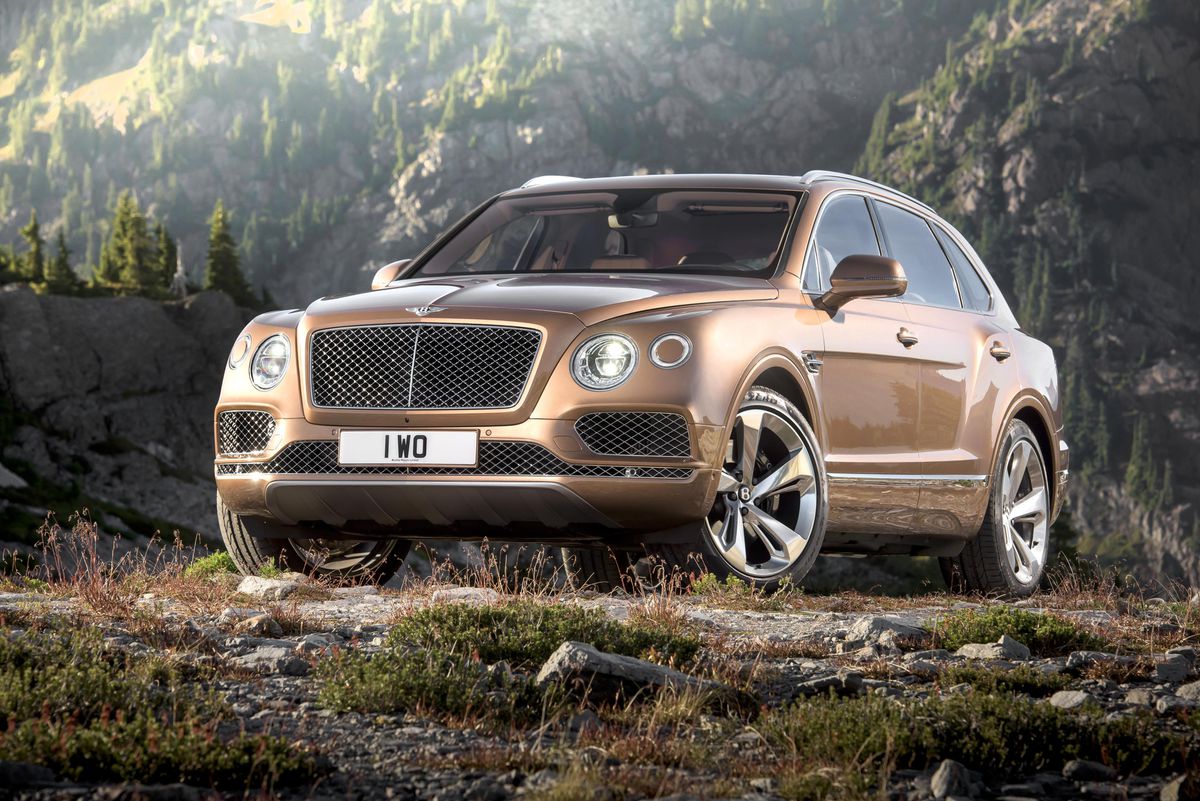 The 2017 Bentley Bentayga can officially be called the world's first super luxury SUV, with more power (and price) than any ute' before it.

Not bad! Just might have to pick one up…

Did you notice that it has no luggage compartment? The area usually reserved for luggage has the table service, stadium blankets, and wine refrigerator in it. I guess it is just meant to get you to the game and your sky box.

Nice ride, I’m sure, but I’ll continue to dream about the Mulsanne when my ship comes in.

@VDCdriver, you win every week when you don’t buy lottery tickets. It’s like a tax reduction. Buy the tickets if it’s for cheap entertainment, but otherwise, enjoy the tax break.

Jt, dreaming is healthy… very healthy… as long as you don’t get it confused with reality.
I have no vices left. Winning the lottery is the dream I have left that has a chance of actually coming true. However, if I were to spend more than I can afford for simple entertainment, or if I were to buy my dream Bentley in anticipation of winning, or if I were to take out a mortgage on my house to buy lottery tickets… then I’ll have crossed the line from a healthy dream to an unhealthy illusion.

Besides, I want a droptop… when I win the lottery.
Of course, the way my luck runs, if my ship comes in I’ll probably be at the airport…

Another car I will never buy. Hell, even if I won the lottery, that car to me looks like an ugly crossover with leather seats/which I don’t like. If I had $300K to burn, I have much better ideas.

Same for me. Even with Lotto money I’d never spend that kind of money on a Bentley.
I’m frugal so I might buy a used Ford Fusion or Subaru.

Some may remember James May on Top Gear going rally racing with a new Bentley. I can only imagine what some of the bystanders were thinking while watching a quarter million dollar car get flogged out in the sticks.

Speaking of the Champagne, I wonder how it and the place settings would fare if the Bentley was driven on a rough off-road course. I don’t think I’d carry that stuff for an apres-race picnic. I suppose you could bring a real off road beast along on a trailer behind the Bentayga. It has enough power to handle it.

I used to know an suv when I saw one. Is a lift gate all that determines an SUV anymore?

Barky, I think anything higher than a sedan is an SUV now.

TSM does that include real military Hummers?

Speaking of Hummers – the real ones, not the civilian wannabe versions – I live not far from a large National Guard base so weekend maneuvers convoys are a familiar local sight. Those Hummers are somewhat intimidating vehicles to see in local traffic.

Does the Bentley have silly low profile tires on flashy rims? I have been seeing a bunch of huge GM Yukon XL Denali SUVs with ultra low profile tires on shiny chrome rims. They look ridiculous and I have to wonder just how impractical such rims and tires are on beasts of that weight?

And…still another brand you better not buy in this town. Closest servicing dealer ? Scottsdale Arizona…329 miles one way.
Heck there’s not even a dealer in Albuquerque. From there you’d choose Denver ( 450M ) or Scottsdale ( 423 ).
But, then again, anyone with the money to consider such a purchase , would probably have the money for towing.

Yes, as a 35 year parts guy, I’ve learned a thing or two about our ‘‘small town far far away from anywhere’’ logistics.
Many locals get stung by the mileage for service, unless covered by the warranty, even for the Albuquerque ( 140m 1w ) brands that have no service here like Mercedes, Volkswagen, BMW, Lexus, and many others.
But HERE’S one that doesn’t ( yet ? ) even have an Albuquerque option.
– yikes –

@“ken green” That’s something most people likely never consider when buying a car. I am seriously considering relocating in a few years so when I went car shopping last year I researched dealer availability in both areas I am considering moving to. Why buy a car brand I might have trouble getting serviced within a few years?

Yah, that’s why I think you’ll see my usuall advice to the posters looking to buy is about service.
I’ll let the other knowledgable folks tell about price, c/r ratings, safety and such…but I chime in with my long term service advice.

The Bentley dealer locator shows only 4 dealers in a swath from MT and ND down through NM and TX. One is in Denver and the other 3 in TX with 2 of those being in south TX.

I suppose living in Butte, MT or Minot, ND would be a discouragement from returning to the dealer for service or warranty complaints.
Imagine sitting in the waiting room of a dealer 800 miles from home with a car torn down and being told the needed part is on back order.

I suppose living in Butte, MT or Minot, ND would be a discouragement from returning to the dealer for service or warranty complaints.