Teslas in the PNW- update

Some of you may recall that on a previous trip to visit my daughter in the suburbs of Seattle, I was somewhat surprised at the high number of Teslas I saw on the road there. I’ve just returned from another trip there, and I have an update. On the Friday after I arrived I needed an Uber to meet my daughter somewhere. The driver arrived in a Tesla Model X which was surprising to me since this vehicle retails for well over $100k. I asked the driver how long he had the car (a little over a year) and how he liked it (fabulous). It was a nicely riding car, and both the ride and interior appointments reminded me strongly of an S-class Mercedes. The driver dropped me off at an upscale mall in Belleview Washington where I was meeting my daughter for lunch. When we walked back to where she parked her SUV, I noted lots of Teslas of all stripes in the garage. In the row where my daughter parked, there were 20 spots, 10 on each side of the aisle. Of those, 15 were occupied by various types of Teslas. The 5 remaining spots were occupied by expensive SUVs. I’m again astonished by how much of the market Tesla has captured, at least in that geographic area. I think that the conclusion we reached months ago, is that this is a lot of virtue signaling by young, high-earning tech workers.

dropped me off at an upscale mall in Belleview Washington

Let me know next time you’re visiting! I work in Kirkland, just 2 exits up 405 from Bellevue. Of course I can’t afford to live in that area, I just get to look at it as I drive by.

I’m again astonished by how much of the market Tesla has captured, at least in that geographic area. I think that the conclusion we reached months ago, is that this is a lot of virtue signaling by young, high-earning tech workers.

I have a friend who drives a 10 year old Tesla. He works at the naval shipyards in Bremerton and has a 35 mile commute to get to work. He’s a year older than I am. So that makes him a 54 year old blue collar worker. What’s his excuse for driving a Tesla?

Maybe he likes the car!

I had a business trip to Northern New Jersey. I took the train, stayed the night at a local hotel. Then next morning I had a Lyft ride from the hotel to the job site. A woman picked me up in a Ford Expedition, an expensive SUV for this type of business. We talked on the ride over and she said we were going though her neighborhood of homes worth more than a million. As we approached the destination we passed a private Jewish grade school. She said she attended it with Jared Kushner. She said she worked to pay the $25,000 annual real estate tax. Apparently well to do people provide ride services too.

Tesla’s been in Bellevue and Seattle for a long time, I see a fair number of Tesla’s here in Olympia as well, mostly Model 3 and Model Y but a few Model S still around. Before the Model3 came out they were mainly here during the legislative session so the only charging was at a couple hotels, Now there are chargers sprinkled around town.

Behind a grocery here in central Illinois there is a row of about 12 Tesla chargers. I saw a Tesla parked there charging for the first time.

Our grocery store added maybe a dozen tesla charging stations. 3 or 4 cars usually charging when I go shopping. Not sure if they are all teslas SE WI

Tesla outsells all other luxury cars nationwide, and I imagine by a larger margin in the PNW.

Not sure if they are all teslas 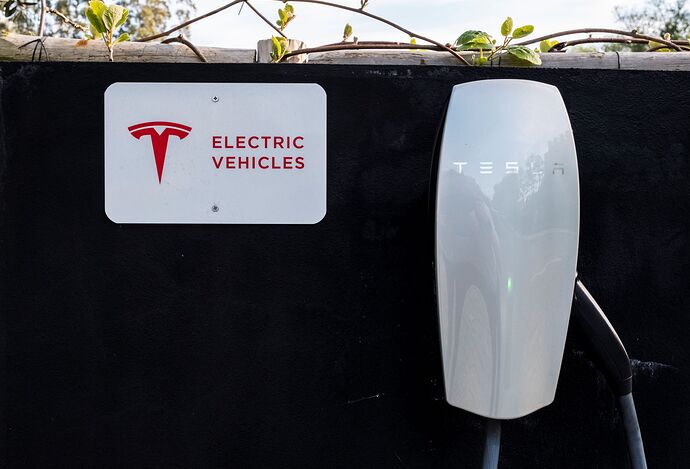 Which Tesla Chargers Can and Can't Be Used by All Electric Cars?

Here are the Tesla electric vehicle chargers that can be used by other EVs and those that can only be used by Tesla models.

I don’t have any particular need to virtue signal, but up until fairly recently I really wanted a Tesla. I still would if the build quality were better, and the company hadn’t started pulling smarmy fast-ones with its customers. If Musk sees this he’ll probably call me a pedo, but I’m willing to take the risk.

Fortunately, Hyundai is kicking some serious butt in the EV game (that Ioniq 5 is a stellar work of design) and a number of other manufacturers are getting in the game as well. I actually liked the Mustang Mach-E quite a bit, which was surprising because I’m generally not an SUV guy. Still weird they named it the Mustang. Maybe their next EV pony car will be named the Explorer.

But there are plenty of reasons to get an EV that have nothing to do with any sort of “virtue signaling.” They’re quiet, tend to be fairly quick if not downright fast, and let’s not forget that while a lot of you were loudly bellyaching about gas price hikes after Russia invaded Ukraine, the EV guys were grinning and driving on.