… is apparently ready for roll-out. Several fits and starts delayed the launch for a few years, but it looks like this time it is happening. 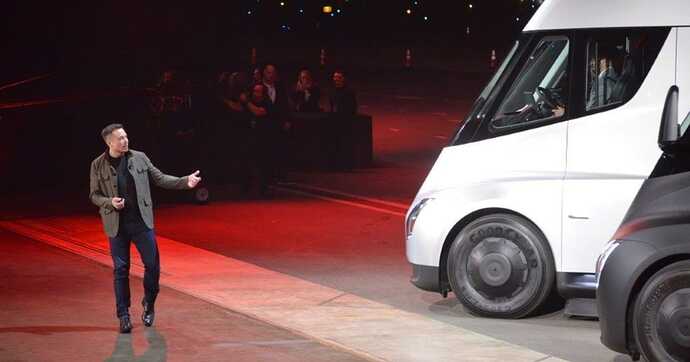 The battery-powered behemoth with up to a 500-mile range is the first semi designed from the start to be electric. Bonus: Musk says it's "super fun to drive."

But how to charge it? Must have a HUGE battery pack, normal truck stops or even Tesla superchargers wouldn’t be up for that.

For what it’s worth, Musk claims that they can achieve an 80% charge in 30 minutes with the equipment that is being installed at Pepsico’s CA facility, where the trucks will be based. Not that I necessarily believe him, but…

I’m sure he’ll put in enough equipment to achieve that in that one location. But making that available at dozens/hundreds of locations is going to be a huge task, much bigger than putting in car chargers.

Estimates put the battery pack at about 900 kw-hr, ~9 times the size of an EV car battery.

Another potential problem, fast charging can reduce battery life. So while the battery can be charged in 30 minutes, truck owner may well have to replace the battery pack sooner than you’d expect. Probably costs a pretty penny. Buyers would probably accept this limitation provided the dealership warranted the battery pack for a long enough time. Another work-a-round, dealer retains ownership, taking responsibility for battery pack, and just leases the truck out.

Estimates put the battery pack at about 900 kw-hr

Why am I concerned about the catastrophe that a fire will cause if this electric Semi crashes .

The article actually says 70% in 30 minutes. It also acknowledges the awesome electrical load that 50 Tesla Semis would place on a truck rest stop. The article states that each charger will be 2 megawatts. To be conservative I’ll estimate 2mW/hr for each truck, or 100 mW/hr for all 50 trucks. That’s quite a load, but since there are mandatory drive times per day, the charging could be phased in a first in first out fashion, controlled by a computer. A 1980s IBM PC can do that. Worldwide, data centers currently consume about 205 million mW/hrs or electricity and we can handle that load. Surely there won’t be anything close to 2 million 50 stall charging centers for EV big rigs. I’m not overly concerned about the power requirements even though they are large. Here’s my source for data center power. 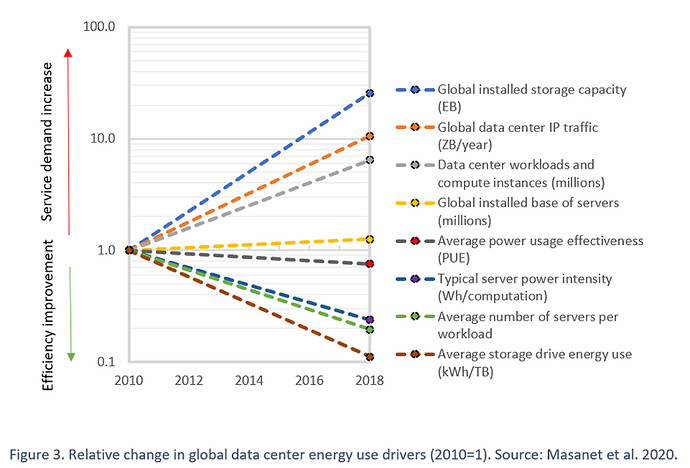 How Much Energy Do Data Centers Really Use?

This research review says that while data center energy usage is lower than estimated, clean energy technology must reduce their growing climate impact.

since there are mandatory drive times per day, the charging could be phased in a first in first out fashion

Drivers can be readily swapped out of a ICE truck. Team driving. You can’t do that with a more expensive asset like an EV semi. It could be charged at the loading dock. Works fine at Pepsico’s dock, not so well at the customer.

Edited… either I or the system duplicated my post

The article states that each charger will be 2 megawatts. To be conservative I’ll estimate 2mW/hr for each truck, or 100 mW/hr for all 50 trucks

The truck will probably be used for local deliveries only for now so they can charge in the home station.

my company has some EV big trucks running around the LA area, but I believe they only have a range of around 100 miles. They have had them for a couple years now. This is a significant improvement, in just a few short years.
Beyond that, I have no data on how they run, efficient they really are, or anything else.

The truck will probably be used for local deliveries only for now so they can charge in the home station.

That’s what I’ve read for a lot of the new electric semitrucks. Since the EV charging network isn’t quite here yet, the semi chargers are nowhere near ready yet, either. I imagine once the network is available, many companies will be switching to the electric semis.

I agree. I was addressing the specific issue mention in the article of long haul charging.

Since the EV charging network isn’t quite here yet, the semi chargers are nowhere near ready yet, either.

You mean Long Haul. WalMart and grocery store chains have many many semi’s that are local only. I have a nephew who’s a trucker for Walmart. He makes 2-4 deliveries to local WalMarts from the warehouse daily. At most he’s 100 miles from the warehouse. Nation wide that probably accounts for a few hundred thousand semi’s.

Yeah, the over the road, long haul trucking.