Supercharging/procharging my daily driver. worth it? mods required?

Hey so i own a 2006 ford mustang v6, its my daily driver and i wanted to have more power so i started to look into supercharger/ prochargers and i found an affordable one that im thinking of getting but i had some questions and just wanted to hear any of your opinions on it before buying it.
Its a P2 centrifugal supercharger by PCE, the one i was looking at was around 900 bucks and just googled it now and found it on Amazon for $625.
Im not planning on going to any drag strips or tracks, i just want to have a bit of fun.
It seems pretty affordable and i don’t see many negatives so i wanted to hear your opinions on it.
I was wondering if it would be possible to install at home?
Do i need to do any engine mods? because i plan on running it stock.
Any extra bit of kit and parts?(i think i need a ‘standard bypass valve/ racing bypass valve’).
thank you.

If possible, download the installation manual, that should answer installation questions and additional parts required.

Personally, I would not do it. The 4.0 has, as I recall, three timing chains which always concerned me. Having said that, my 06 with the 4.0 had 130,000+ miles on it when I traded it in, good, robust engine, never used oil, ran on 87 octane. Granted, not a lot of HP, but adequate. I do understand your desire, At one time, I too considered a supercharger.

In one of your other threads it seems you put too much transmission fluid in this vehicle . I think you should just update your vehicle because I really don’t think you have the skills to pull this off . I also think that this Mustang might not be in good enough shape to handle the power boost.

this Mustang might not be in good enough shape to handle the power boost.

+1
After 16 years of use and (probably) a lot more than 100k miles on the odometer, I don’t think that this engine will stand-up to being boosted for very long.

Its a P2 centrifugal supercharger by PCE

That $625 part is only a small portion of what you would need to install it into your car. There are a LOT of expensive parts and fabrication needed to supercharge your 4.0 when starting with this.

Here is a more comprehensive kit that includes most everything you’d need except a bigger fuel pump…Notice it costs nearly $7000… withOUT installation. 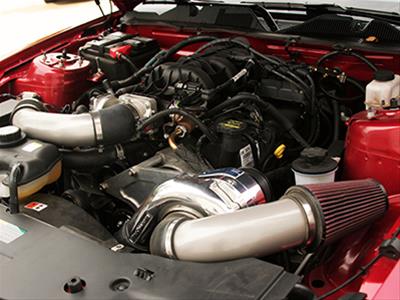 And doing this to an old engine means you are likely to blow the whole thing up in very short order. I would not recommend it. Save up to trade it for a V8 or a later model Mustang with the 305 hp V6.

yeh turns out i had transmission issues so had to get it reconstructed but yeh i agree with you, i might not have the skills required.
thank you for your opinion

yeh i saw that normal kits are cost many thousands of dollars thats why i was atracted to this one, thinking id only need to by a few extra parts which i was hoping wouldnt cost too much but yeh you all make valid points concerning my car probably not being to handle the boost/costs being higher then expected/ skills required to pull off the job being out of my league.
thank you very much for your insights on this, i apreciate it!

I just pretend that my car is the fastest Corvette in the world. Then I drive it like the minivan that it is.

How much boost do you think he can put on that engine without needing to change the fuel system or need the chip reprogrammer?

How much boost do you think he can put on that engine without needing to change the fuel system or need the chip reprogrammer?

He might get it to run up to maybe 5-6 psi before the car couldn’t figure out the need for additional fuel but I’d guess the CEL would pop on for fuel trims and/or MAF out of range. That’s where I figure the fuel injectors and pump would run out as well. It likely would not run very well and there would be too much spark advance under boost. The knock sensor may or may not be able to save it. It might get the engine to 280 HP before it burned hole in a piston top.

This all assumes no leaks from the exhaust piping and the intercooler piping that needs to be routed all over the front of the car.

A supercharger doesn’t need an exhaust modification does it?

A supercharger doesn’t need an exhaust modification does it

Not mandatory but recommended. Not gonna get much extra from 3 psi. That is maybe 25 HP.

Plus I doubt you could buy a supercharger and the brackets to mount it plus the pulley modifications needed to turn it for $1000. This was my answer to the original post.

What’s up with all these posts from people wanting to turbocharge/supercharge/engine swap their already high-performing car? Don’t these people realize that if there was really a cheap and easy way to increase the performance without sacrificing safety and long-term reliability that the manufacturer would have already done so from the factory? The only thing funnier than these kind of posts are the ones where people want to “tune” their PCM to unlock additional horsepower–even on a NA car!

These posts are from people who have watched too many Fast and Furious movies and YouTube videos showing the installation of home brew systems which never expose the costs nor ALL the gritty details of the project.

They think they’ll buy a cheap turbo or supercharger on EBay and slap the puppy on with brackets fabbed from Home Depot hardware for less than a swap to an actual V8 car.

Reality so often bites hard in the wallet.

Not mandatory but recommended. Not gonna get much extra from 3 psi. That is maybe 25 HP.

If the timing wasn’t changed due to chip reprogramming and premium fuel was used. Do you think the timing would be delayed so much with a stock computer that it wouldn’t get the 46HP boost?

What about the efficiency of the supercharger? In other words what about the horspower it takes FROM the engine to compress the air? It comes directly from that 46 hp.

A very complete with tune commercial kit that advertises an 80 hp gain and uses 10 psi to do that so that 3 psi boost is about the 25 hp I estimated.

Supercharging is certainly cheaper and sounds “Super” but the only real HP advantage is that it kicks in at lower RPM than a Turbo because it avoids the Turbo Windup Lag.
The disadvantage is that at higher RPM the Super is still draining HP from the engine which the Turbo isn’t.

So for Drag Racing, maybe but again, if the rest of your “system” isn’t capable of handling the additional stress it may be a short but sweet experience. .

What about the efficiency of the supercharger?

I forgot about that! I just read somewhere that you can expect 7% more power for every 1PSI of boost. I assumed that includes the energy needed to run the supercharger, but maybe not.

What I want is one of those electric motor powered superchargers even if it puts out only 1 PSI!

What I want is one of those electric motor powered superchargers even if it puts out only 1 PSI!

Waste of time, money and electrical current… but knock yourself out! You can get them on EBay.

I think you’d gain more with methanol and water injection