Static charge getting out of car

I get a huge jolt of shock when I get out of the car and touch the car frame. I live around Detroit where its cold and very dry, so I have to wear warm coat. Can any one suggest how I can avoid collecting static while driving and best way to discharge it when I get out.

The best way to reduce static buildup is to install seat covers of a material that’s not prone to storing static, suh as cotton. A wool or cotton coat helps too. Synthetic materials can be prone to static buildup. I’ve attached some links to information on the subject. Tons more is available in the internet.

There are also “grounding straps” that can be installed that allegedly allow static to discharge to earth. I don;t know how well they work, but they’re cheap. If your door handles are metal, just grab the handle before you slide on the seat to exit the car. This “grounds” you to the car frame before you generate a static charge.

Or touch the door with the back of your hand to discharge the spark. It doesn’t hurt nearly as much as the finger tips. Given the alternative, it should be easy to train yourself.

Also you can try using some spray starch.

Strap this to the back of your car. Job done. 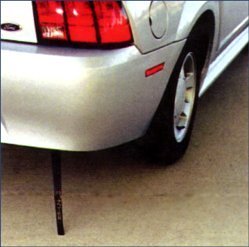