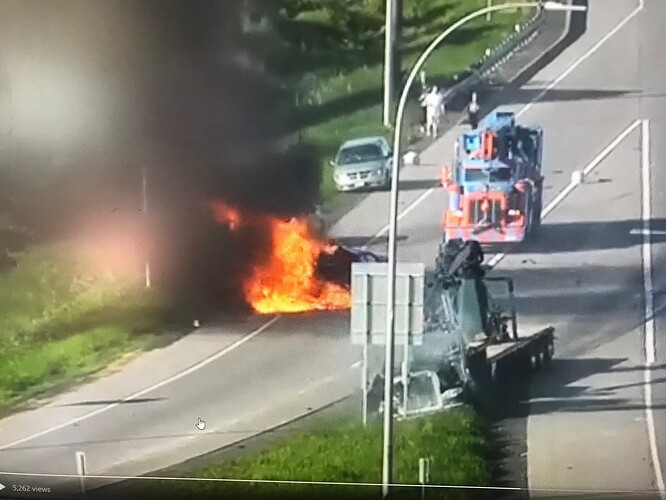 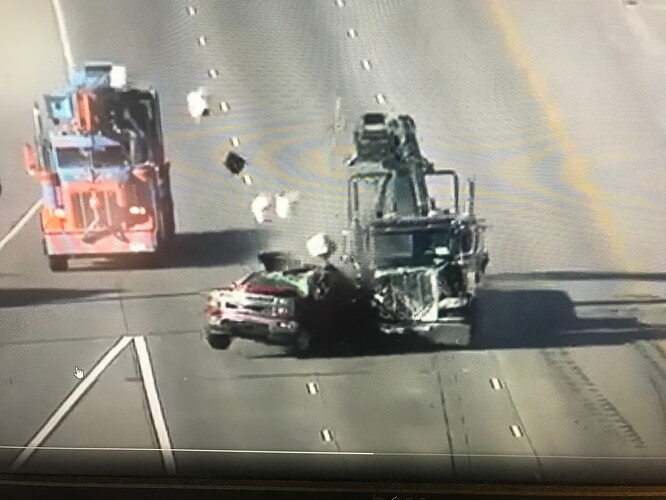 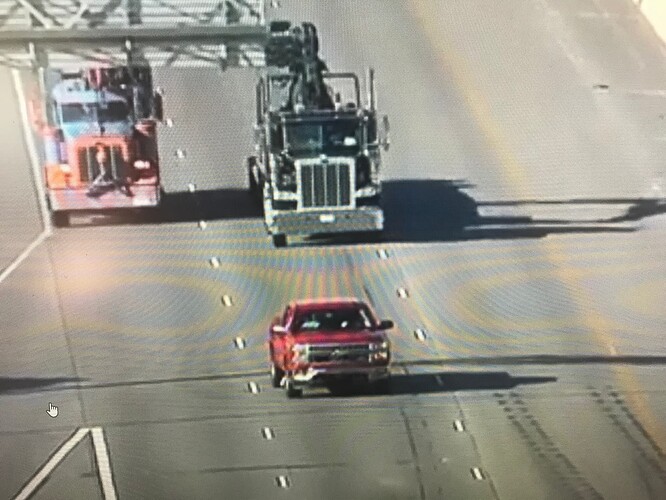 image1920×1440 420 KB
Not a good place to stop after hitting deer
Truckers have great eyes. And empty lane next to them. 8am.
Red truck hit deer. Airbag deployed. She said it was hard to exit truck since floppy airbag made it difficult? She assumed truck was undriveable so she got out.
eddo June 2, 2022, 9:32pm #2

I saw this video this morning, I really hope she was out when that truck hit her red pickup.

big truck should have been able to miss her. She was stopped, and roads were clear.

I think that all people see a car in front of them on highway and cannot fathom the fact that it is stopped. Why else would cops on roadside get rear ended so often? A car is on highway. It’s “moving”. It cannot be stopped. Maybe it’s a mind trick?

I saw the film a day or two ago. They said the car was stalled. The truck though is not a semi but a bucket/crane truck. Looks like the two were driving together. Never even made an attempt to avoid the stalled truck. Parts everywhere and pushed it to the side of the road where it burst into flames. No excuse for the inattention. Whether it was drivable to the side of the road would be questionable and irrelevant.

I’ve been in a similar situation to the truck driver a couple of times. I avoided hitting anyone, but I have come upon stopped vehicles in the highway, etc. with no brake lights or hazards on. You tend to look past the cars in front of you and assume they’re moving somewhat along with traffic unless you see brake lights or it’s a situation where you expect someone might stop. Then you notice you’re closing in on them surprisingly fast and (hopefully) respond. The reason they have a minimum speed limit on highways is to avoid that, I’d assume. I’ve never rear ended anyone, but I’ve come close twice. Both times there were no brake lights and it was in a scenario where you wouldn’t expect a vehicle to be stopping.

A 2 ton truck with a bent bumper IS driveable to the roadside. It iS relevant to the discussion. The pickup driver is an uneducated fool and the truck driver was criminally inattentive.

A 2 ton truck with a bent bumper IS driveable to the roadside.

Remember that next time your airbag goes off in your face and you can’t see the steering wheel and you have no idea of how much damage has been done to your car.

I have to agree that she should’ve moved it to the shoulder, if at all possible. Easier said than done after the airbag deployment rattling your brain, I know. Still, I can’t imagine just hopping out of my truck and leaving it in the middle of a multi lane highway. I think they have signs instructing you to move your vehicle to the shoulder after a fender bender for this very reason.

I think that all people see a car in front of them on highway and cannot fathom the fact that it is stopped. Why else would cops on roadside get rear ended so often?

Many states have a Move Over law. Any emergency vehicle or work crew on side of road you MUST move over to give them one lane distance between you and them. Not always easy to do though.

In NJ, the Move Over law states something to the effect of…
If changing lanes cannot be done safely, drivers should decrease their speed to xx while passing emergency vehicles on the shoulder.

Not to beat a dead horse, I’ve never had an air bag go off but friends did after hitting a deer. They ended up in the hospital checking for injuries. So I can see some after shock from that happening. Sure no one expects a car to be stopped in the middle of the road, but still the side of the road is not safe either from the number of cars plowed into on the side. It’s the old rule that you need to have your vehicle under control regardless. But Minnesota has the move over law too and there are signs on the metro roads to not obstruct traffic if your car is drivable. Cars still get demolished on the shoulder with lights flashing. She would have been dead in the fire ball if she wouldn’t have exited the truck.

the side of the road is not safe either from the number of cars plowed into on the side.

+1
And, I am always shocked at the number of cars that plow into 18-wheelers that are parked on the shoulder. How could somebody not perceive that such a huge vehicle was stopped? Of course, if those now-dead folks who ran into the back of those 18-wheelers had stayed in their lane, those collisions would never have happened.

I think that the term that could be applied to people plowing into parked vehicles (cars or trucks) on the side of the roadway is “target fixation”.

That was a term used first in WWII I think. It referred to pilots being so intent on strafing a ground target that they would actually fly into the ground and of course; do themselves in.

Back in the 60s the German Luftwaffe acquired over 900 F-104 Starfighters. Almost 300 of them crashed.
Main cause? So intent on ground target practice missions (and a brutally fast aircraft) they would just augur in at high speed. Over a 100 pilots found this out the hard way but the rest pulled the eject handle.

Same with a “target” on the side of the road. They get to rubbernecking, forget they’re driving, and like a moth to the flame plow into whatever their attention is on.

I used to discount that but I’m reconsidering. In snowy or foggy weather with a car on the side of the road with the tail lights or flashers on, sometimes you can’t tell if they are in the driving lane or on the shoulder until you are right on them. The other thing is those blinding lights on patrol cars now. At night it can be hard to tell where the heck they are and which side of the road until very close to them. I understand they want to be seen now but man are those flashing amber lights bright at night.

I am always shocked at the number of cars that plow into 18-wheelers that are parked on the shoulder. How could somebody not perceive that such a huge vehicle

Mountain bicyclists face a similar problem, they’ll be slowly riding down a fairly steep dirt trail, brakes on, and see a rock on the side of the trail ahead. If they didn’t see the rock, they’d just go right past it. But when they see it, they stare at it, and this causes them to invariable steer their bicycle toward the rock. I’ve had that happen many times; I often end up going right over rock, both wheels. It’s some kind of psychological phenomenen at work I expect. And likely the cause of drivers running into vehicles parked aside the road. It’s quite possible emergency lights flashing makes it more likely they’ll get hit.

Police cars getting hit on the side of busy freeways with sometimes fatal results is not an uncommon thing here. Various reasons given for the police cars on the side of the freeway, helping stranded motorists, problems with the road surface, sometimes they are just monitoring the passing motorist’s speed using their radar.

Driver of the boom truck must have been distracted, texting?

Texting is illegal in Minnesota now. Can’t even hold your phone. Might have been distracted by the other truck though. Direct hit. No swerving or braking it looked like. The interesting part though is how fast the truck became a fireball. They say to stay in your vehicle but no way she could have gotten out in time.

It’s hard to tell from just three still pictures, but that black truck looks too close to the red pickup. If he was following at that distance on a highway, he was way too close.

The links above provide the full video in living color from the state traffic cameras.

Thanks for pointing me to the YouTube videos @bing. Clearly an inattentive truck driver.