Saab 9-3 Key won't go into the ignition at all

A week back we drove our car (2002 Saab 9-3) and it ran fine.
Today when we went to the car, we saw that the driver door had not been closed properly and also the battery was completely drained.
What intrigued us is that the car key would not go into the ignition at all, as if something is blocking it from being inserted.
Please see the picture of the ignition.
We would appreciate help with this. Thank you. 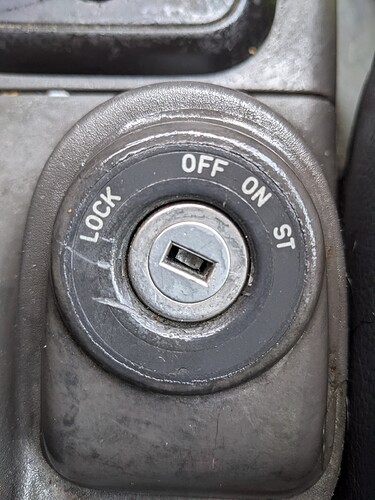 Just an idea, since Saabs are weird in some ways. Try hooking up another vehicle las to jump start the Saab, and try inserting the key, when the car has some power.

Looks like something broken off in there
Screwdriver?
Maybe someone tried stealing it and they’re the ones that didn’t close the door 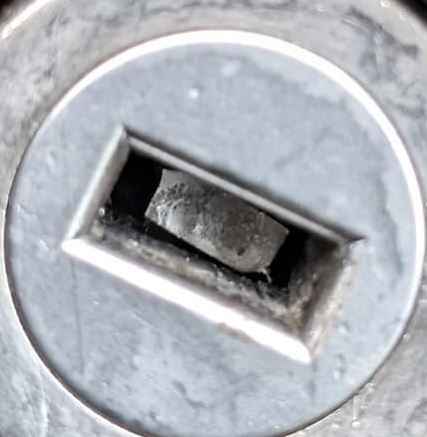 Ha, look at your key?

I concur with It_s-Me and Cavell,

Looks like something broken off in there. Screwdriver? Maybe someone tried stealing it and they’re the ones that didn’t close the door

Ha, look at your key?

But, if I had to put money on it, I would bet on It_s-Me from my own experience. If someone is trying and failing to steal your car, they do not want to announce their presence but making noise shutting the door.

But Cavell makes a good point, check your key and any other keys to the Saab in your household.

I believe it’s either a broken key or screwdriver and if you do not have a really small pair of forceps (google it…) or tweezers, you will probably have to call a locksmith. A bent nail is too large to fit between the obstruction and the side of the lock opening and a bent wire is too flexible to get a good grip. Now, it you have access to some thin, spring steel that might work.

Hardware stores (Ace, Lowes, Home Depot, Taylor, and almost all hobby stores) often carry a product called “music wire,” hobbyists use it and the wire comes in 12" and 36" lengths and comes in some very small diameters. The cost of a few bucks thrown away trying to bend a piece and claw the obstruction out might save you a Locksmith house call.

See a product below…

You had trouble with this ignition before where the key would not turn . How did you solve that problem ? Maybe you just need a new ignition now.

What you’ve written is indeed what has happened.
Don’t understand why they used a screwdriver in the ignition.
What purpose does the screwdriver serve there?

What you’ve written is indeed what has happened.
Don’t understand why they used a screwdriver in the ignition.
What purpose does the screwdriver serve there?

Thank you for your detailed post and suggestions.
We tried pulling it out with tweezers. But it seems they twisted the screwdriver in hard and damaged the lock cylinder. When we pulled the metal piece out, part of the lock cylinder also came out with it.
So we are left with damaged lock cylinder.

Wouldn’t the immobilizer have prevented them from starting the car using a screwdriver?

Wouldn’t the immobilizer have prevented them from starting the car using a screwdriver?

Yes, but nobody ever said car thieves were smart.

$1,300 in damage to my steering column when someone attempted to steal it.