I bought this truck a couple years back for cheap, knowing it had some rust and other issues, but thinking I’d fix it up as I went and more or less just use it for dump runs, moving things, etc.
The work ended up being so involved that the rust got away from me before I was able to treat it, and now it’s eating through the frame and body.
After the work I’ve done on it (new PCM, PS pump, timing chain, water pump, cylinder head, crank sensor, trans range sensor, fuel pump driver module, brake rotors/pads/calipers, and new tires), I’ve realized how much the rust has been eating away the frame, and am concerned I’ll be able to sell it at all, beyond just for parts.
So here’s the question… KBB has this truck’s value at $6,320 for “fair” condition. Think anybody (and I would be straightforward with them) would buy this for anywhere close to that price, or at all, considering it probably needs a frame replacement? Trying to determine if I can 1), ideally sell it as-is without doing any more work, considering outside of the rusted frame it’s running great and has a ton of new parts. 2) Replace the frame and then sell it for what it’s worth (would not be excited about this option). Or 3), take the loss, sell it for parts and move on.
Thanks in advance for any thoughts or ideas! Greatly appreciate it. 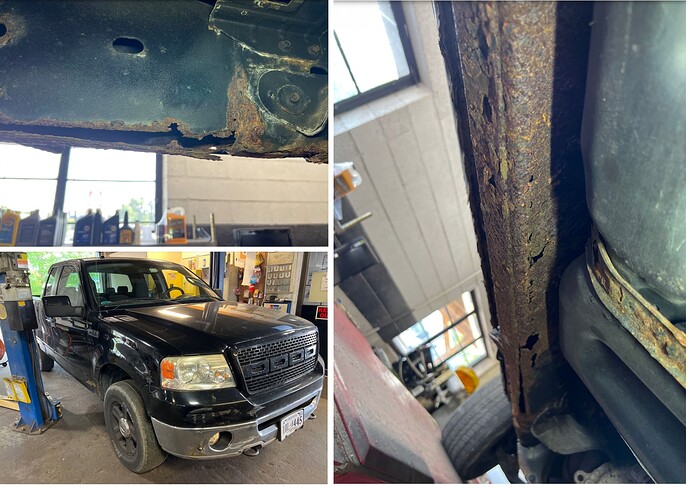 That truck would sell for 5k very quickly here in Indiana, People drive them with rusted frames, and when they start to fold in half people keep driving them. No state inspections and an absolute unbridled love of pickup trucks equals a situation where anything with a bed sells, and people drive their pickup trucks until they won’t drive no more

I basically junked my 1997 F-150 because it was rusting away underneath. The frame rails weren’t as bad as the one in the picture. But I do live in a state with a safety inspection (but no emissions testing). I would never considering buying a truck the frame in this kind of shape, but that doesn’t mean others wouldn’t.

Be straight with the buyer. I’d say you are not going to get $6320 for that truck.

But you could sell it to an optimistic buyer just like yourself who thinks he will fix the frame and have himself a nice truck. You could ASK $6300… but unlikely you’d GET $6300 but I don’t know your market. If people tend to pay asking price with little haggling in your area, you’d better price it as low as you’d take for it.

Get a price from a body shop for a frame relacement . I would not sell it to anyone that might try and drive it and injure theirself or someone.

You have a lot of useful parts there, but probably not a useful truck. Why not list it for parts in Craigslist or someplace similar? The price is pretty flexible because the buyer might need a lot or just some pieces.

That doesn’t even rate poor condition

sell it as-is without doing any more work, considering outside of the rusted frame it’s running great and has a ton of new parts.

only to a junk yard.

don’t think you’d get you money back

Thanks for replying! No sir. I do not think the truck is in “fair” condition. I’m sorry I didn’t better explain my question. I was asking if there is any market for a truck like this and putting feelers for what my options are.

Thanks! That may very well be the route I go. Thanks for the response!

Thanks Rick! That’s good to know. My goal is to sell it to someone who wants it, for one reason or another, at a price that’s fair. It helps to know there might be some sort of market for it, considering how well it still runs. 'Preciate it!

Thanks Rick! That’s good to know. My goal is to sell it to someone who wants it, for one reason or another, at a price that’s fair. It helps to know there might be some sort of market for it, considering how well it still runs. 'Preciate it!

What State are you in? It may not be that way where you live. Around here that would sell fast.

Oh I’m sure it’s a bit different, I’m down in Virginia. We have state inspections. But I still figure at this point I can put it up for something under the KBB value, be transparent about the rust, and see if anyone wants to make an offer!

Thanks! Yeah I agree, definitely don’t plan to ask KBB for it. People do tend to haggle here (Virginia) but even still I’d start a fair about below KBB considering the frame’s condition. Thanks again!

Have you looked in to the weld on frame repair kits for that? The bottom of the frame is worse than the top because water settles there.

Thanks! Thought about it but not looked into it too much to be honest. Any idea if it would pass a state inspection with that as the fix?

Your large photo shows it rusted out on the bottom and sides, not much left to weld a repair to.

I would say sell it as is. A used car buddy used to say there is an ass for every seat. You will not get the money out of repairs imhop, and scrap value will be minimal. Parting it out is a PIA, list it and let it go imhop. 3 grand would be a good deal for you!

Really appreciate it!
That’s helpful, thanks very much.