Back when Japanese manufacturers didn’t know how to prevent rust, I bought a '79 Accord with rust on every body panel. The best (simple, cheap) solution I found was a product you could brush onto a rust patch (after cleaning off loose bits), which would dry to form a sealed, black, paintable surface. That was long ago & I don’t remember the name of the product. Any ideas?

It may have been xo rust or something similar. 3m makes a similar product, but it does build up so do not apply more than you need 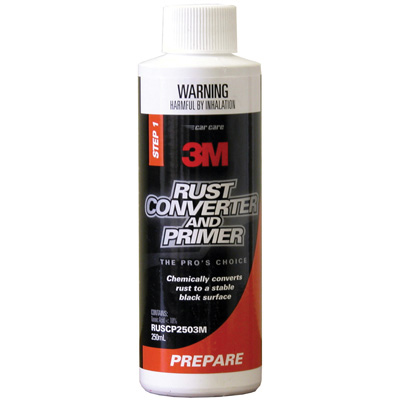 Google “rust converter” and you’ll find a whole raft of such products.

“Extend” maybe? Cured to a semi-glossy hard shell that required priming and painting. Wasn’t all that good, really.

. There is nothing that will stop the rust other then putting a hole where there is some. Once rust has started, nothing will stop it other then rust removal. You do that, you have no car left. It’s near impossible for converter to get to every crevice. It seems to work for a while, but just a while…

I’ve used POR-15 successfully on the battery tray in my 93 Caprice and the bottom edge of the door on my 2000 Blazer. It does dry to a hard black surface but I’ve never had the need to paint it. I used the Starter Kit.

Naval Jelly’s only good if you can completely remove the part and access all the nooks and crannies for when you rinse it off.

I am not endorsing Naval Jelly. Based on the car being a 79 model, Naval Jelly would be the product he most likely used. Just looking at the time frame here.

If your intent is not to replaint a rusted area, you can easily paint grease over it or coat it with oil and reapply as needed. Of course, don’t rub un against the area as dirt, will accumulate there too. But it works by cutting off the oxygen supply. And is the only reliable way of keeping rust from getting worse

@keith, No, because naval jelly must be washed off. OP said the product he used “dried to form a sealed black paintable surface.” Naval jelly doesn’t do that.

Quote from a wikipedia article on phosphoric acid. Bolding is done by me.

“Liquid phosphoric acid may be used for dipping, but phosphoric acid for rust removal is more often formulated as a gel. As a thick gel, it may be applied to sloping, vertical, or even overhead surfaces. Different phosphoric acid gel formulations are sold as “rust removers” or “rust killers”. Multiple applications of phosphoric acid may be required to remove all rust. Rust may also be removed via phosphate conversion coating. This process can leave a black phosphate coating that provides moderate corrosion resistance (such protection is also provided by the superficially similar Parkerizing and blued electrochemical conversion coating processes).”

Everyone is looking for a one stop, easy to apply solution to removing rust and replacing it with a “good as new” surface. The only effective way is elbow grease, priming with a good primer and repaining. Given that some neutralizes may offer some benefit initially, they all suffer from the same “maladies”. They are poor paint primers and prevent the paint from offering the long term protection it should. You will return to the repaired area unless you just move on to a different car. If this stuff worked as easy and was as durable as everyone would like, our infrastructure repair cost for repairing bridges would be cut in half…snake oil works better.

I have used some "successfully " but only with the realization that I had to return to the rusted area yearly for inspection and re treatment and repainting when necessary. That is a more realistic expectation of it’s effectiveness.

@keith, your bolded quote refers to a “phosphate conversion coating,” which is different from the “phosphoric acid gel” (ie naval jelly) described in the first part of the paragraph.

Phosphate conversion coating is not intended to be washed off. It just dries hard. Naval jelly (aka phosphoric acid gel) must be washed off. Two different products.

I use Plasti-Kote Rust Converter. I order it from Amazon.

jesmed1, I know how phosphate conversion coatings work and they do have to be washed off, as does the Naval Jelly. The difference is that to do the conversion coating, the product is immersed in a bath or is constantly being showered with the phosphoric acid for a specific time, then rinsed off. The gel sticks so it works on an area that can’t be dipped or it is not practical to shower the area with acid.

I have done a lot of phosphate conversions.

@keith, I defer to your knowledge of phosphate conversion coatings.

But my impression of the OP’s description was that he used something like POR-15 or another “rust conversion” product that is painted on over the rust and allowed to dry. He didn’t say anything about wiping a gel off as he would have to do with naval jelly.

I use Rust Primer from Lowes which is available in a large bottle on the cheap; something like 6 or 7 bucks. It works very well.
Some antique motorcycle parts which were badly rusted were wire wheeled down, coated with RP, and 10 years later still no rust bleeding through the paint.