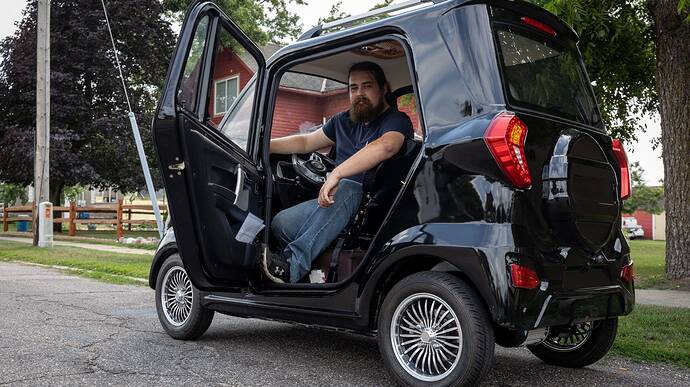 Opus Motorcar Co. is selling small, low-speed electric vehicles with hub motors — the kind in e-bikes and scooters — designed for short trips around town. Its 25-year-old CEO, Tom Skahen, has some big ambitions for shaking up how people think about...

There was a LOT unsaid or brushed over in the article. This is not a “car” because it doesn’t meet all the standards required. No airbags, ABS, stability control, baclup cameras ect.

It is a NEV, or neighborhood electric vehicle…basically a golf cart with lights and turn signals. And that 35 mph top speed is not allowed for NEVs. 25 is max. NEVs have been around for decades and have not changed the automotive landscape.

This will be just lke the LSV ( Low Speed Vehicle ) fiasco we had in Oklahoma a few years ago . The state was giving refunds for buying one . Hundreds of cheap undependable LSV 's were sold . People founf out that they could not even drive on some areas because they were limited to streets with 45 mph speed limits . You hardly ever see one now and many of the dealers that sold them will not work on them because they can’t get parts .

This new venture is just a toy for large gated resort type communities .

Yeah this was in the paper a week or so ago. Essentially an $8000 golf cart with a roof. Just assembling parts from afar but hoping to some day do the manufacturing.

As with all of these types, just strictly a go to the store device so a second or third vehicle taking up space. For what purpose I would ask?

Just a couple of quotes and my reactions.

“ They have regular safety features, including seat belts, signals, windshield wipers and lights.”
“ It can travel about 25 miles on a single charge. ”
I wonder what the range is on a cold rainy night using lights wipers and heat.

“There’s all kinds of enthusiasm about different ways to get around that don’t necessarily require you to take the whole car out of the garage."

“ After earning a degree in aerospace engineering from the University of Minnesota in 2020”
All that education to import parts from China.

If one could be had for $2000 or less, I’d consider it. Since my Corolla was forced off the road by Covid complications, I rarely drive on higher than 35 mph roads anyway. Safety issues not much of a factor given much of my “driving” now is by bicycle, which is way less safe than the mini-car.

If I insisted on my right of way as a bicyclist, I’d have been dead long ago. Not a ride goes by where I don’t have to stop & yield to a driver (or sometimes just another cyclist) who should be yielding to me by law.

Not a ride goes by where I don’t have to stop & yield to a driver… who should be yielding to me by law.

That isn’t right, George, but clearly you’d rather be alive and disgusted than dead and right. Good choice!

rather be alive and disgusted than dead and right.

True enough. I just smile and let the other driver do what they’re going to do anyway. If I was in a hurry I’d be driving my truck. It’s a pretty frequent thing where somebody will say “I just started to bike to work, and enjoying the ride.” Then in a month or two they I find them driving, they say they got hit by a car and gave up riding a bike to work. When pressed, I usually discover they were insisting on their right of way. Folks who are successful at riding motorcycles and staying safe know all about this issue.

Snow and ten below seems to keep the bike lane traffic down here.

@George_San_Jose1 When my mom taught me to drive she insisted I learn the following ditty she had to learn when being taught to sail a boat.

Here lies the body of Michael O’Day
Who died maintaining his right of way.
He was right, dead right, as he sailed along
But he’s just as dead as if he were wrong.

he’s just as dead as if he were wrong

lol … good adage to teach new drivers. I’ve seen bicyclists occassionally pull out in front a moving car, a car that should have stopped to yield to cyclist, then the cyclist stops in front of the car, gets off the bike and goes over to the car window and shouts obscenities at the driver. Me, I just stop, let the moving car pass, then I continue on my way.

Just the other day I was stopped, off my bike, waiting at a crosswalk. Very visible. One, two, three, four, five, six cars go by, none of them even slows down. Finally a break in traffic and I push my bike across the street.

Skeptics quoted in the article said the same thing. In its current form the Opus #3 won’t have wide acceptance. As the article said, there are a few places that allow golf carts on the road. It is clearly a seasonal vehicle in MN but in some small towns in the South that allow golf carts on the road it could be used all year. The Opus doesn’t have to gain wide acceptance to be useful. I’m not interested at any price for myself, but others might be. Starting a business is a big risk and this one might fail. I do wish the entrepreneur good luck. Maybe the OP will give us an update in 6 months on how the Opus #3 is doing in sales. I wouldn’t be surprised if he has better luck selling them in Europe than here. Big cities like Amsterdam don’t allow large vehicles in town except to drop things and people off. If you want to park, it has to be a small car. We were in Amsterdam in 2003 and even then we couldn’t park the 9 passenger van I rented in town. I had to drop the family and luggage at the hotel and return the van to the airport, then take the train back to Amsterdam.

Several EU countries similar “cars” that are driven by the young and the old. They are limited in speed… not sure how slow but they have tiny engines.

USA’s car manufacturer’s not gonna be happy to compete with cars like that. they’ll say “why do we have to install air bags, and they don’t”? etc etc. Since car manufacturer’s are a major source of funding for political campaigns, little likelihood of success for that sort of vehicle in usa imo. In order to meet all the politicians requirement it will become so expensive that it isn’t a viable competitor.

USA’s car manufacturer’s not gonna be happy to compete with cars like that. they’ll say “why do we have to install air bags, and they don’t”?

No, @George_San_Jose1. You are going way overboard. The Opus #3 is not licensed for the open road. Some small towns in MN allow golf carts on the road in town and the Opus competes with them. I can’t believe that any automobile manufacturer will care what the Opus people do.

My first encounter with a smart car was in Amsterdam. The thing was so small they parked it on the sidewalk. Same place I saw the first use of a vacuum garbage truck. Two guys, one to put the tube in the garbage can and the other to operate the vacuum cleaner to suck the garbage out. The back in the truck and on to the next one. Gotta watch yourself or you’d get run over by the bikes. Same place they thought my tire gauge was an explosive device.

USA’s car manufacturer’s not gonna be happy to compete with cars like that.

The GEM car has been around for 20 years. 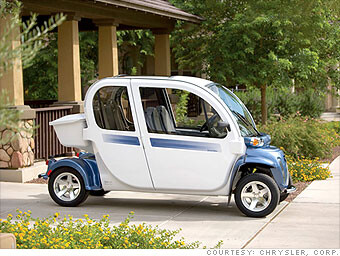 I’ve seen those in the SJ area. Rare, but it certainly exists here. The owner drives it on the neighborhood 25 - 35 mph roads, but not sure if legal to do so. I don’t think it has license plates.

I’ve seen bicyclists occassionally pull out in front a moving car, a car that should have stopped to yield to cyclist

I’m real curious as to why you think that the cyclist has the right of way here. Was there a yield sign or stop sign that the motorist was supposed to stop or yield at. Was the car driving in a bike lane?

Co-worker used to drive her dad’s Miles NEV like this, she made him sell it and get an actual car, he now has a Kia Niro EV with a Hyundai Ioniq5 on the way. 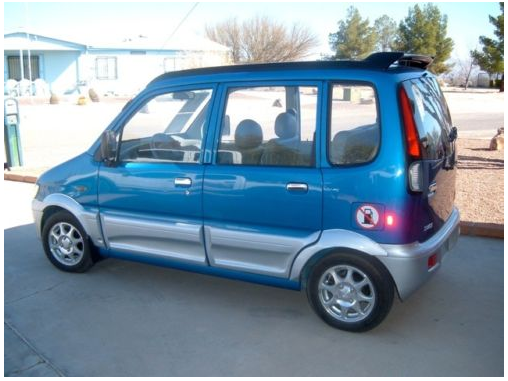