People are really upset about lawn damage after snow plowing. The city does a good job keeping the streets clean and safe. Must have a new crew because so many years the plow missed the curb by 2 to 3 feet. Tired of people beaching. Yes report it and the city will fix it, or take 10 minutes kick it back down and call it a day. Tninking every body wants to complain about anything! Totally upset Karen look what they did! It does appear the street is under the grass, ever heard of edging? 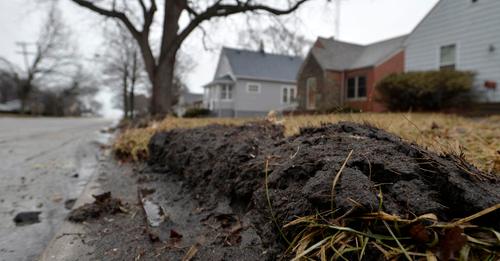 You think Karen is upset now, wait until the city comes out and fixes it by taking back their 3’ or so of easement and puts in a sidewalk at her expense…

The easiest way to prevent this is by putting up markers so the plow guy knows where the street ends. On days where we have 1-2 feet of snow the plow guy is just guessing. Neighbor of mine had just put in a new Granite post mail box. First storm and the plow guy destroyed it. Sh*t happens.

I agree. We have mailboxes about a foot from the curb that mark the edge of the road. We get little enough snow that it’s almost never difficult to see the curb anyway.

Where I lived in New England the only mail boxes that survived a series of winters were on a post, set back from the street several feet, that held the box on an arm and had a rotating base. If it got hit it would swing away from the curb and the homeowner had to swing it back. Many of us just gave up and got a PO Box, so we’d go get the mail when the weather got better.

What can I say? My plow guys are pretty good. I’m on a curve but I always blow the snow in the street to reveal the curb. I have a mail box but there is a precise regulation about where they are placed and can’t be place several feet back from the curb. The mail person does not get out of the truck to deliver the mail and doesn’t have two foot arms. Yeah markers work but are ugly.

I’m more concerned about the kid that cleared our drive while we were gone. He uses an ATV with a blade and hope he left my grass alone. Spring is only a couple months away so we’ll see.

edit: Oh I see, the base set back two feet not the box. Gotta go clean the driveway.

Moved my mailbox, requrement was x distance from the road, don’t recall what the max was. used a 4x4 on a spike mount as it is so rocky. Year before last snow from the plow bent it over, not hard to straighten it.

I’m all for that! I didn’t pay for it directly though. The developer had to put them in when they built our house. Oh, and don’t forget the grey water sewer, city water, natural gas, and electricity.

It might happen where my parents live but that grass grows there even if you don’t want it to. That part of the yard is the pasture grass cut really short. We have curbs and a foot of grass between there and the sidewalk so the lawn isn’t in danger in my development.

Yeah, grass seems to grow everywhere except where you want it

Yeah we pay for our portion of the road too according to frontage feet. I have a pie shaped lot but neighbors on both sides have two lots. Surprise surprise when it came time to re-pave the road. The original cost of curb, gutter and paving cost about the same as the lot.

In the 60s, by the end of February some city streets were down to one lane because the plows did not plow all the way to the curbs.

Neighbor of mine had just put in a new Granite post mail box. First storm and the plow guy destroyed it.

Every winter, one of my neighbors has his mailbox wiped-out by plows, simply because he has the post set so close to the curb. The good news is that the town sends a crew to replace it after the storm, but the bad news is that they always put the new post in the exact same place as the old one, with predictable results the following winter.
Lather, rinse, repeat…

Meanwhile, my mailbox stays in place–just far enough back from the curb to prevent damage.

Every winter, one of my neighbors has his mailbox wiped-out by plows, simply because he has the post set so close to the curb.

There’s a MAXIMUM distance the postal service allows the mailbox is allowed to be set back. Set back too far and they may not deliver the mail.

Yes, and apparently I am within that maximum distance because, while my mailbox has never been hit in the 26 years that I have lived here, the mail lady has no problem putting mail in it. Or, in other words, my neighbor could re-set his post a bit further away.

you are probably right. but there is a possibility you have a nice mail lady who has to step out of the vehicle a little to put the mail in the box. I have done that more times than I like to remember. next time you get mail check to see if she is leaning way out of the truck to put it in or stepping out. just to make sure.

next time you get mail check to see if she is leaning way out of the truck to put it in or stepping out.

Fairly often in the warm months, I am outside trimming shrubs or putting down lawn treatment when she arrives, and I can see that she just reaches out her right arm in order to place the mail in my box.