So, I have a 2008 Saturn Vue 3.6L V6. There is a part in our engine compartment that is making a lot of noise and vibrating quite a bit. It also does not stop when we shut the engine off. The only way to get it to stop at all is to unplug the battery. We also dont know what the part is. Its located in the left side of the engine compartment, right under the coolant surge tank. We tried pulling every fuse in hopes of figuring out what it was, but nothing changed anything. After doing a little bit of research, it seems like the only thing that it could be would be an electric fan, but I could find no one with the same problem. If anyone has any idea of what it could be, I would greatly appreciate any information at all. Hell, if someone can just tell me what part it is, that would be awesome. 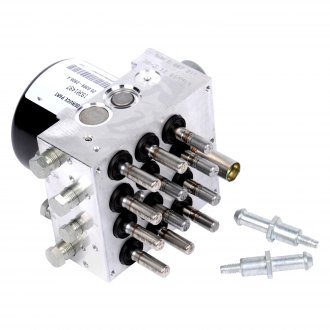 If so, that’s the ABS modulator valve.

Yea. It looks just a little bit different but, I just went and pulled the ABS fuse and the vibration stopped. Do you have any idea of what could be causing it and is the ABS system absolutely essential. I know its the Anti-lock braking system, I just personally have never driven a vehicle without it and I’m not sure we need it or not.

I’ve driven vehicles for over 50 years without ABS. I’m still around.

ABS prevents the brakes from locking up in a panic stop or if the tires lose traction. This allows steering to avoid hitting something instead of slidding into something. But it also increases braking distance.

The problem is most likely with the ABS control module.

I would definitely replace the module. ABS is one of those things like airbags, you may never need it, but when you do it could save your life. Like Testor I’m still alive but have experienced loss of steering by locking up the front wheels, which is corrected by getting off the brake, ABS does it for you. ABS came into play for me recently when a crate fell off a truck in front of me on I95, hard braking to in order to change lanes.