My 1996 Oldsmobile 98 is overheating after 5-10 minutes of idle time. I took it to a local guy I know, and while it was beyond him to fix, he was able to give me some info to pass on.

He also sent me a picture of codes to pass along. 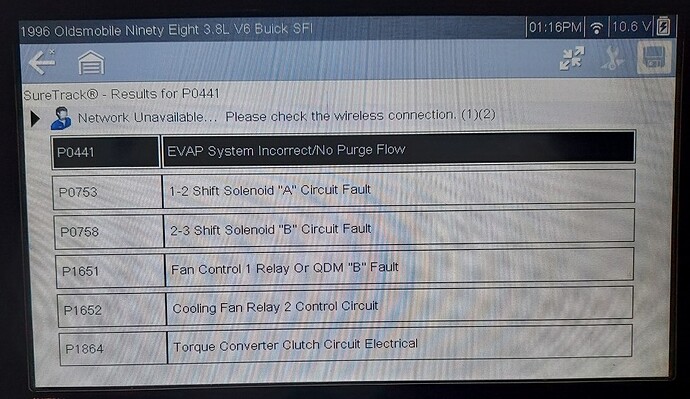 You have a wiring problem. Not a transmission problem.

Every code except the Evap code is electrical. You need a mechanic that is proficient in tracing electrical problems. Damaged engine side wiring harness is a likely issue.

With all these problems, I’d say a pack rat or other critter munched on a wiring harness. Do not spend money on transmission repairs, or engine repairs until the damaged wiring has been repaired or replaced.

Odds are the aged cooling fans are worn and drawing excess current. That will pop the fuse and also cause engine coolant and transmission fluid overheating as the fan RPMs are not up to what they should be. Just because the blades turn does not mean the motors are good.

If it were me I would check the fan current flow with an induction ammeter. I have several Snap-On meters (one for alternators/other for starter motors) and the former used for something like this. It only takes a minute to perform a task like this and will answer the high current question.
At a quarter of a century old I suspect those fan motors are on their last leg. Hope that helps.