Oil Leak - what is the name of this part?

I have an oil leak – looks like it’s coming from the part in the picture – what is the name of this part? 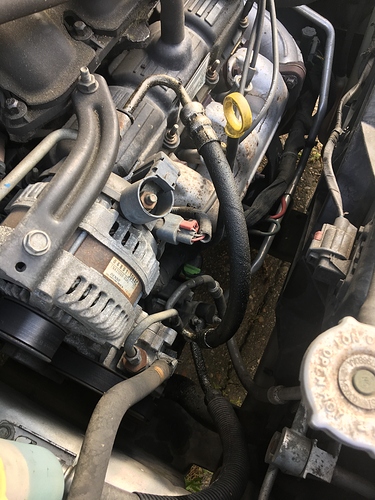 The hose in the middle of the picture is the power steering high pressure hose.

I think you are referring to the PS hose…but then again… you might have said what is the name of this hose if that is what you meant, so I dunno.

Until the OP actually indicates what part we are supposed to name from that picture a bunch of guesses don’t mean much.

Yes it makes a grunting noise when I turn at a low speed – I thought it was something on the wheel but that is probably it!!! Thanks!!!

Sorry I had 3 pictures to upload and the forum would only allow me to upload one since I was a newbie. I was in the middle of repairing something else and was in a semi rush and didn’t describe it any further (since in my mind, I had 2 more closer up pictures). Two folks seemed to identify it since it was the only thing in the picture leaking! I’ll do better with my descriptions in the future!! Thank you everyone!!!

I didn’t know the name of the hose … that was the whole reason for this post! Thank you for your help!