A Texan has purchased the pristine 1948 Lincoln Continental that was owned by Babe Ruth, and this car is…absolutely gorgeous…at least IMHO.

For a few minutes of pleasurable reading about–and viewing–this beautiful car, take a look at: 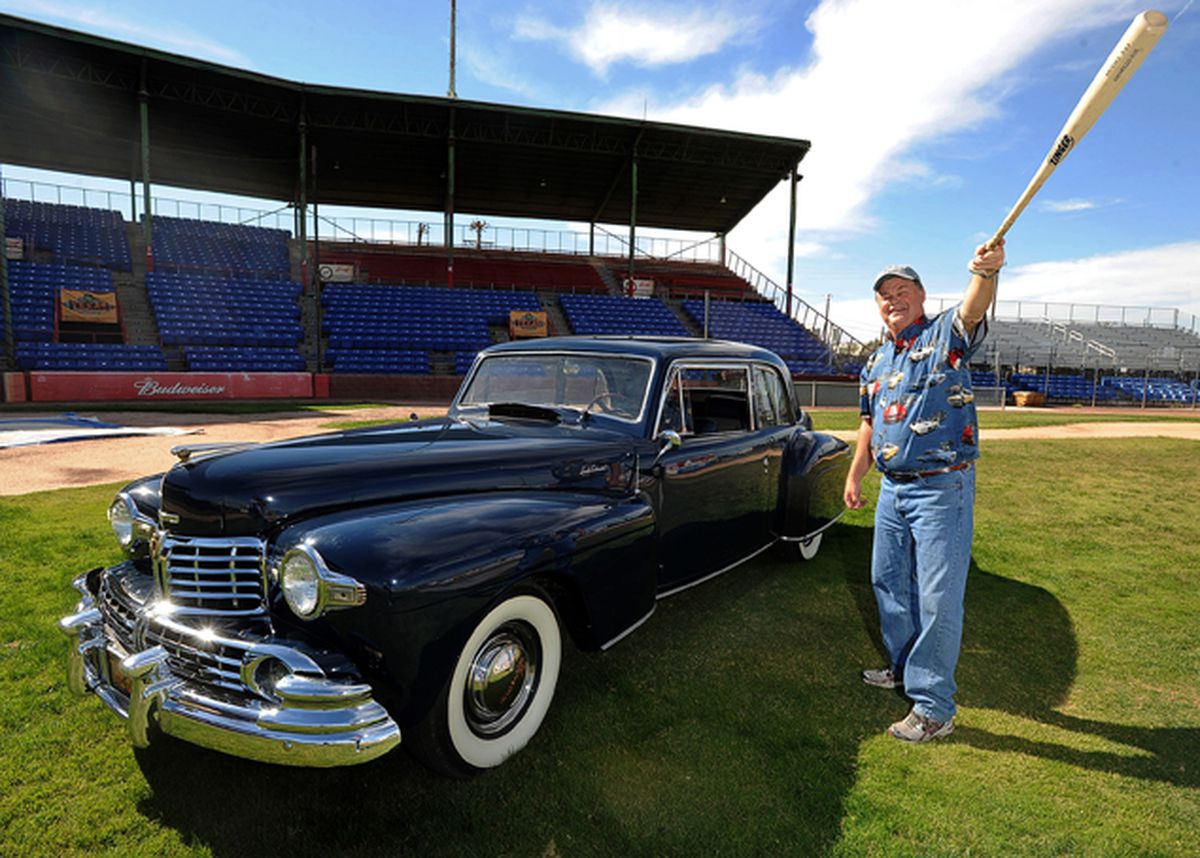 For an astronaut it’s the moon. For a jockey it’s the Kentucky Derby. For Pampa’s Lonnie Shelton — and baseball fans across the nation — the ride of a lifetime is a regal blue 1948 Lincoln Continental two-door hardtop coupe.

If I had the money to build a car collection, three cars would be at the top of my list: 1) Tucker for its innovations that were way ahead of the time; 2) 1941-1948 Lincoln Continental for its great looks; 3) Studebaker Avanit for its advanced styling in the 1960s.
The Lincoln Continental of this time period had a V-12 engine that wasn’t exactly known for its durability. The pushbutton door mechanism in place of door handles were hard to operate for people who had arthritis,but these Lincoln Continentals are true classics.

I wanna ride in the car Hank died in.

It’s a stunning car no doubt about it. I wonder if it will show up at some point in the near future at a Barrett or Russo/Steele auction?

The style and color are very similar to an excellent 1939 Packard that a blacksmith (yes, we still had one of those) who lived down the street from me about 15 or so years ago.

Triedaq–I think that we may have been separated at birth!

My list of preferred collector cars is the same as yours, but just a bit longer.
I would add a Hudson Hornet with Twin-H Power, because of its incredible record of wins in race competitions–back when the cars were essentially factory-stock. Not only was the Hornet fast, but its low center of gravity gave it the best cornering in its day.

@VDCdriver–had I thought about it, I would have added the 1951 through 1954 Hudson Hornet to my list. Hudson took a bold step with its step-down design in 1948 along with its new 262 cubic inch 6 cylinder engine that grew to 308 cubic inches for the Hornet. These Hudsons had superb handling. After the Hornet, I would put the 1949-1950 Nash AirFlyte with its aerodynamic styling that had the lowest coefficient of drag in the U.S. auto industry. The car held 6 passengers and was very comfortable. My next choice would be the Checker Superba for its durability. The last car on my list would be the 1957-58 Studebaker Scotsman. To my rural background, it represented a solid, no frills bargain in transportation.

Non disclosure of the buying price. I wouldn’t want others to know I just spent 8 or 9 figures on a car, either.

So whadaya think he paid? Gotta be over a mil? Neat car.

Triedaq–Do yourself a favor, and pick up a copy of the newest (December, 2012) issue of Hemmings Classic Car magazine. One of the articles features photos and a write-up regarding a one-off convertible Hudson Jet, which was built as a prototype shortly before the merger with Nash. For those who are not familiar with the history, Nash President George Romney pulled the plug on the Jet, in order to continue to sell the Nash Rambler–which was definitely inferior to the Jet.

Even if that merger hadn’t taken place, it is likely that a convertible Hudson Jet would never have reached the production stage, given the extremely anemic sales figures for Jet sedans, but it is nice to dream about the possibility, given the outstanding qualities of that model.

The prototype came equipped with a high-compression head and the Twin-H Power induction package, thus making it the earliest performance compact car. Unfortunately, bad decisions during the design phase led to a narrow body and a too-upright stance for the Jet, but despite its somewhat cramped quarters and high profile, it was an excellent performer, and–like all Hudsons–it handled much better than the competition, including the Rambler.

The biggest shame about the Jet was that its failure meant that Hudson could not raise the funds for V-8 engine development, and that omission was what caused Hudson’s demise.

Anyway… if you get a copy of this magazine, you can feast your eyes on this luscious little red convertible with red & white naugahyde upholstery. It looks so much sportier and more attractive than the Jet sedans that it almost looks like a different car!

Am I the only one here that wants a 58 vette?

I prefer the updated tail on the 1961/1962 Stingray. But my interest is just about the looks. I like the C6 Corvette looks as well and it’s a much better car.

@VDCdriver, is this the Hudson Jet?

Those who are familiar with Hudson Jets will notice that the roof is lower than was the case with the sedans. In order to facilitate a lower roof for the ragtop, the designers used a slightly chopped windshield and windshield frame, and they also dropped the floor pan in the back seat area by a couple of inches, so that the rear seat could sit lower than standard.

If the convertible’s roof had been as high as that on the sedan model, it would have looked really goofy. In the process, they wound up with a car that looked a whole lot less ungainly-looking than the Jet sedans.