Good afternoon. Here the horror story that I experienced on Memorial Day. My 2012 Nissan Altima has 157,000 miles on it. I NEVER had one problem with it. Kept up with routine oil changes and other updates.
I had two tires changed Monday morning at Walmart since, following my most recent oil change, the attendant said the treads were getting really low. I had the day off and thought I’d chance it with Walmart’s Auto Care. They’ve changed tires before. It’s basic stuff.
Later in the afternoon, I drove my wife and daughter about one hour away to visit an aquarium and to enjoy the afternoon. Upon arrival to the aquarium, the vehicle began to shake and had difficulty accelerating. At first, I thought “God grief, Walmart put the wrong tires on the car” and that it was responding as such. It got much worse than that.
The car would not accelerate and I had to park it at a nearby store. We had it towed to the Walmart Auto Center in this particular community, where the service workers said they could not do anything with it. I had the car then towed to a tire care expert who, the next day, said the problem was not with the tires, but with the transmission. I was surprised.
Thankfully, we were near an airport where we could get a rental car to take home.
I had a transmission expert look at it and he has since said the entire transmission is shot and needs replaced.
I’m appalled. NOT ONE TIME was there ever an indication this type of disaster would unfold. I am sitting here skeptical on whether Walmart’s Auto Care did something that could have led to this. I don’t want to believe this, but the timing is suspect. I have no evidence to suggest my vehicle was tampered.
However, to have this type of transmission failure is a complete surprised. A Nissan Altima, which has been maintained, should be able to drive beyond 157K, correct?
Is this rare? What could have cause this?
Perplexed! Disgusted!

Things break and just putting new tires on did not damage your transmission . At 157000 miles you should have had new fluid in the transmission at least 4 to 5 times .

I just found the timing to be suspect. I’m trying to learn more about why I did not have at least one indication (not a warning light, nothing) that something to this extent was about to occur. Even when the transmission gave out, not one warning light came on in the car. Nothing.

CVT failure is common with Nissans. 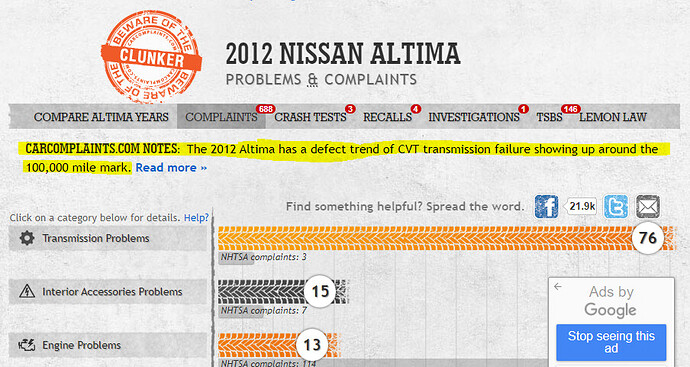 I’m trying to learn more about why I did not have at least one indication (not a warning light, nothing) that something to this extent was about to occur.

There is no “your transmission is about to fail” warning light.

Thank you. Again, is it common for this to just suddenly happen, with no prior warning that it would occur?

the timing is suspect. I have no evidence to suggest my vehicle was tampered.

That’s because this incident was coincidental.

to have this type of transmission failure is a complete surprised. A Nissan Altima, which has been maintained, should be able to drive beyond 157K, correct?

Yes, most cars are able to get beyond 157k w/o serious transmission issues, but all bets are off when it comes to Nissan and their highly problematic CVTs.

This was the case mostly from the '90s up through 2010, but the improvement in their transmissions for the next few years was minimal, unfortunately, and their dismal record of trans failure apparently runs up to 2016. Because of the HUGE number of Nissans with prematurely failed transmissions, they did issue an extended warranty, but that only runs to 120k miles. In case you don’t believe me, this is just one of the many webpages that detail the fact that Nissan’s record with that type of transmission is the worst in the industry: 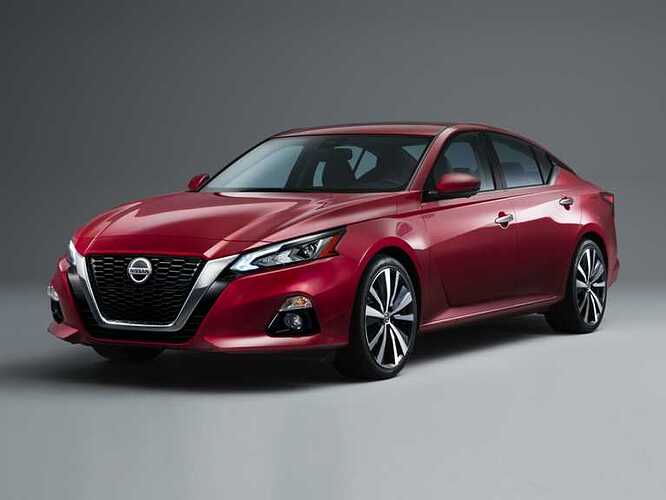 Having Nissan Altima transmission problems? You might not be alone. Check out some of the most common issues at Vehicle History.

I have very rarely had any indication of a transmission failure. One morning I parked in the ramp at work after a 50 mile drive and at night all I had was reverse-trans overhauled at 180K. The Olds dealer apologized for the trans going out at 80K and I said no, it has 180K. Before the extra digit on the odometer. Stuff wears out.

Again, is it common for this to just suddenly happen, with no prior warning that it would occur?

Yes, this IS common.

following my most recent oil change,

did you have anything else done when the oil was changed recently?

Issues w/ Nisssan automatic trans’s are not an uncommon by the reports we get here. OP could try the forum search feature to see what others have said.

As I read the post initially, what with the vehicle shaking and difficult to control symptom I thought the problem was going to be the wheel’s lug nuts started to come loose. I had that problem myself one time, caused by you know who … lol …

Sorry you had that problem & partly spoiled your holiday OP. I doubt it has anything to do with the tires or your prior maintenance. Transmission parts are slowly wearing all the time, a little thinner here, a little looser there, and eventually one will wear to the point the trans fails & the vehicle can no longer be driven.

As insurance for the lug nut problem, wouldn’t have helped in this case presumably, but whenever I have tire work done, I drive the car immediately to the home driveway and loosen, then hand-torque all the lug nuts in the recommended sequence with a breaker bar and socket. TAkes little effort on my part, and occasionally I do spot a problem.

I don’t recall. It was a standard oil change.

I drove my wife and daughter about one hour away to visit an aquarium and to enjoy the afternoon.

Do you routinely cruise on the highway, or was this out of your normal driving pattern?
This might have been the straw that broke the camel’s back.

I hate it when my acceleration rapidly decreases.

I’ve transmission fluid added. “4-5 times” – I dunno how many times. But the car has been to a mechanic a few times since it went over 100K.

But was the fluid actually changed so you had fresh fluid ?

Nissan is known for having CVT transmission problems. it has been going on for years. we had a 2008 Altima that the tranny was replaced about every 30k miles. we got rid of it before the Nissan extended tranny warranty ran out at 10 years/120k miles