My manual makes a rattling sound

I have a weird noise with my manual transmission

I have a 94 manual ford ranger and the transmission makes a noises like a bunch of rocks spinning in a tin can or chains. It only happens when I let off the clutch and don’t put the gas in quick enough or if I stop and don’t put the clutch in fast enough. So only in the first two gears or reverse but once I get going it stops. So if I do the clutch/gas perfectly it doesn’t. What could this be?

How often have you changed the transmission lube?

If you can’t remember, the transmission is chewing itself up.

I bought it used about a month ago and took it it to my buddys mechanic shop and they put some in it. But it drips slowly. Ill check the fluid level tomorrow, how do i know if its too late and need repair? It drived just fine

Drain the fluid and look for metal in the old fluid.
Your Ranger manual transmission likely uses ATF, it has a change interval of 50K-60K miles. Change it now, you might get lucky, but I suspect you may need a new transmission.

Change it now, you might get lucky, but I suspect you may need a new transmission.

and they put some in it. But it drips slowly.

This is almost positive proof the transmission has been run too low.
I’d start looking for a used one out of a wrecking yard right now. Yours is on its last bearings.

I agree, in the “good old days” unscrupulous used car lots would put sawdust in the transmission and and rear differentials.

As you said, likely a new transmission, I think I would do the clutch at the same time,

how do i know if its too late and need repair?

They start making a noises like a bunch of rocks spinning in a tin can or chains.

It’s usually cheaper to replace them with a used one, Those transmissions in Rangers are pretty good. so a used one that doesn’t show any signs of leaking is a good bet.
You’ll need to match engine size 2.3, 3.0 or 4.0 and RWD or 4x4

Thankyou for the knowledge. I bought it for 2800 the engine is strong but thats sad to hear. I will drain the fluid and put some new stuff in. What would happen i just keep driving it untill i have the time and money for a differnt one? It drives find and switched gears fine one i get going .And i understand the sound could mean it going/gone bad but could you explain what exactly the sound would be coming from if i was looking inside of it?

the noise is usually caused from the case bearings being damaged causing the gears to become misaligned. 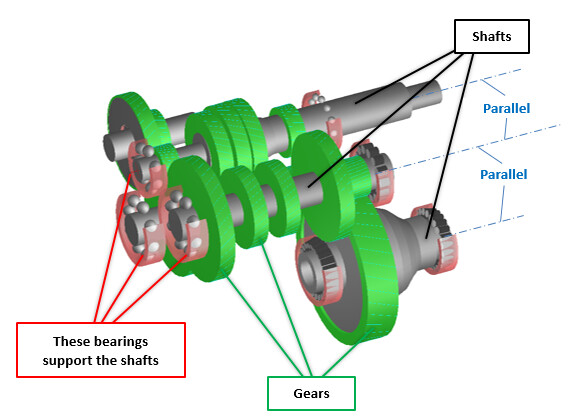 What would happen i just keep driving it untill i have the time and money for a differnt one?

It is a complete guess as to WHEN that might happen. I can’t say it will last 10 months or 10 weeks or 10 days. I don’t know when you can save up enough to buy a used transmission. See the problem?

Change the oil, check the level often, start searching for a used transmission. It won’t cost that much for a 28 year old truck. At least when the trans blows, you’ll have one for you or your shop to install.

I understand. ill look around and after I talked to my friend I misunderstood, he said it was overfilled already and didn’t need more but still dripping but that doesn’t change the situation

It is a complete guess as to WHEN that might happen. I can’t say it will last 10 months or 10 weeks or 10 days

… and, when it finally fails to function, will that breakdown take place in a dodgy section of town–at night? Or will it happen while crossing RR tracks? Or, will it take place while in the midst of 18 wheelers on the Interstate?

Because nobody could possibly know when or–more importantly, where–the breakdown will take place, I think it makes perfect sense to prepare for that replacement, and to do it sooner, rather than later.

Are you certain noise is from transmission? From the clutch relationship, probably is. But when someone mentions a rocks rattling inside a can sound, should consider engine pinging as possible cause as well.

That is the sound of the engine stumbling/struggling because you forced it the operate at too low of speed.

What would happen i just keep driving it untill i have the time and money for a differnt one?

Don’t replace anything before the problem is identified. If the noise is caused by improper clutch operation, there is nothing to replace.

I always pressed the clutch to the floor before stopping.

Won’t it crack the case of the transmission when it goes? If you plan to rebuild it do so before this happens.

I don’t feel so worried about my M5OD-R2 after reading this.

Thank you for the advice. Ill try to look more into the problem and also take the tranny out look at it and put it back in if i need to. It drives just fine on the road, stays in gear and changes gears reliably just the sound worrys me and like you said it seems to only happen when i force the engine to start going. At low rpm without gas. Thenother day i did a noob mistake and stopped at a sign without the clucth ans started going with the gas right beforemit stalled and it was really loud but when i match the right rpms when taking off or stopping with the clucth or neutral gear in the right time its not noticeable. I bought some new gearbox oil and gonna drainnand replace just formthe heck of it and see how bad the old stuff is

Just for fun, go kick the tail pipe a couple good ones. Maybe if you’re really lucky and all the stars are aligned it might be an exhaust heat shield.

I once ran over a piece of snow and it knocked my exhaust system off the hanger. Under certain torque conditions, I heard this strange rubbing noise. All I had to do was lift it back up and put the hanger back in the rubber bushing where it rests.

I agree that the simple stuff should be checked first before considering a rebuild or replacement. Pay a shop $100 or so to look at this if you can’t find anything.

Apparently the transmissions in these trucks are pretty tough. This guy is basically trying to destroy this truck for some reason and can’t seem to succeed. What Happens If You're in 4WD And Put Your Transmission In Reverse WHILE driving? - YouTube