I thought I had found the wonderful Inn that was mentioned on the show. I was really excited. I thought it was a little strange because it was in a seriously Amish area here in Ohio. It was a challenge dodging all the horse paddies. I went up and down Holshoe road three times, but there was no Holshoe Road Inn. Bogus car advice, bogus travel advice 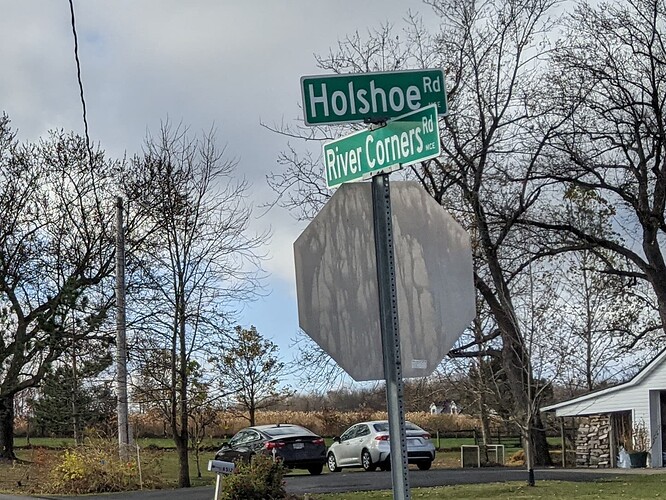 Not sure what episode you’re listening to, but there has been no “NEW” show produced after Sept. 2012

So anything you are listening to is at least 10 years old and most likely older.
The ones playing on the podcast now are from the early to mid 90’s so about 25+ years old

So there may have been a Holshoe Road Inn then.

Perhaps Galloway or Tom and/or Ray heard the expression for the other or maybe it’s an old expression that goes way back and both Galloway and the Magliozzis picked up it and used it independently.

However, if you read the following Credits that Ray would recite at the end of each broadcast, the expression is at the end…

The ending credits of the show started with thanks to the colorfully nicknamed actual staffers: producer Doug “the subway fugitive, not a slave to fashion, bongo boy frogman” Berman;[23] “John ‘Bugsy’ Lawlor, just back from the …” every week a different eating event with rhyming foodstuff names; David “Calves of Belleville” Greene;[24] Catherine “Frau Blücher” Fenollosa, whose name caused a horse to neigh and gallop (an allusion to a running gag in the movie Young Frankenstein);[25] and Carly “High Voltage” Nix,[26] among others. Following the real staff was a lengthy list of pun-filled fictional staffers and sponsors such as statistician Marge Innovera (“margin of error”), customer care representative Haywood Jabuzoff (“Hey, would ya buzz off”), meteorologist Claudio Vernight (“cloudy overnight”), optometric firm C. F. Eye Care (“see if I care”), Russian chauffeur Picov Andropov (“pick up and drop off”), Leo Tolstoy biographer Warren Peace (“War and Peace”), hygiene officer and chief of the Tokyo office Oteka Shawa (“oh, take a shower”), Swedish snowboard instructor Soren Derkeister (“sore in the keister”), law firm Dewey, Cheetham & Howe (“Do we cheat 'em? And how!”), Greek tailor Euripides Eumenades (“You rip-a these, you mend-a these”), cloakroom attendant Mahatma Coate (“My hat, my coat”), seat cushion tester Mike Easter (my keister) and many, many others, usually concluding with Erasmus B. Dragon (“Her ass must be draggin’”), whose job title varied, but who was often said to be head of the show’s working mothers’ support group.[27] They sometimes advised that “our chief counsel from the law firm of Dewey, Cheetham, & Howe is Hugh Louis Dewey, known to a group of people in Harvard Square as Huey Louie Dewey.” Huey, Louie, and Dewey were the juvenile nephews being raised by Donald Duck in Walt Disney’s Comics and Stories. Guest accommodations were provided by The Horseshoe Road Inn (“the horse you rode in”).

As “someone” else would say, “That’s all Folks…”