… a motorist learned–the hard way–that she shouldn’t drive her Honda into wet concrete. 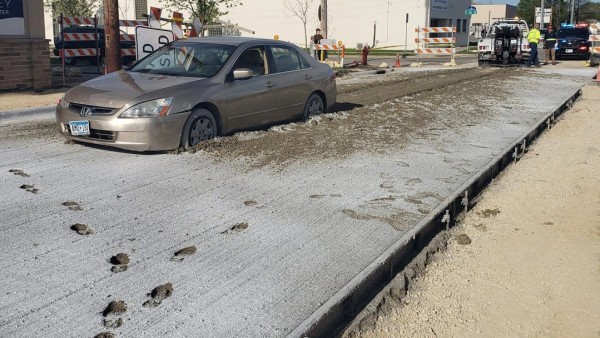 Minn. woman tries to flee police, drives into wet concrete and gets stuck

I don’t know what the legal remedy would be, but this woman does not need to be behind the wheel of anything.
This is event 10 with 9 recent priors. Is 11 going to be plowing through a crowd of people on the sidewalk or a group of kids at a school crosswalk.

this woman does not need to be behind the wheel of anything.

+1
The clue to her questionable mental state is the info about her driving around–repeatedly–shouting “the word of God” at crowds though a bullhorn while driving. Hopefully a judge will see fit to have her remanded for a psych evaluation before she winds up killing someone.

Looks like she dragged the road closed barricade with her!

Looks like she dragged the road closed barricade with her

She decided that it had sinned, and it needed to be punished.

In her defense, maybe she thought it was the Red Sea…

Yes, it’s road construction season in Minnesota so be careful where you step. Rochester though seems to be a petri dish for increasing craziness. I think it might have something to do with the long term effects of having thousands of geese over-winter instead of going south. They just refuse to use the public rest rooms. Some people think they are cute. I drive through the place but I haven’t stopped there since I retired.

In NJ, the Canada Geese no longer migrate, and just like in MN, they seem to be here year-round. Their waste products are particularly nasty.

But, at least they have provided employment opportunities for some people. Companies like Goose Chasers have commercial clients to whom they transport their dogs (Australian Cattle Dogs??), and the dogs harrass the geese into flying away… temporarily.

the long term effects of having thousands of geese over-winter instead of going south.

In NJ, the Canada Geese no longer migrate, and just like in MN, they seem to be here year-round.

For some bizarre reason, they have been a “protected species” for as long as I can remember. Clearly, this should be changed, as they multiply almost as fast as rabbits.

My solution is to allow them to be hunted–with the proviso that the bounty be given to prisons, plus homeless shelters, and other types of facilities that feed the poor. My idea would solve two societal problems, but nobody seems to want to implement my suggestion.

This is just speculation on my part but maybe the wind turbines have halted the geese migration. We use to see countless Canadian geese every year going back and forth.
After the first couple of years the migrations started going away and migrating geese were seldom seen.
Same for ducks.

There were a few this past year but could be counted on one hand. At first there was about a 40 miles long line of turbines here in northern OK. Now it’s more like 140 miles all strung out east to west.

When it first went it I watched one morning as 2 flocks were headed north. One flew between the turbines. The other right at one of them at nacelle height. Surely they are not that stupid. Yes, they are.
From a half mile away I could see dark dots falling to the ground like rocks. No idea how many got whacked.
They did not even learn a lesson from it. They continued flying north right at the nacelle of the next turbine in their flight path. The other flock continued on the path which led between the turbines. I assume a homing mechanism was at work and they were working on an A to B route; obstructions be darned.

Maybe it took a couple of years for looming death to become engrained in them.

This is just speculation on my part but maybe the wind turbines have halted the geese migration.

Perhaps in your area that is true. In the Northeast we have had non-migrating Canada Geese for decades, but we didn’t have any windmills until just a few years ago.

I lived on a mountain road in Colorado, stream between property and paved road, cross a small bridge, paved driveway to the main entrance. There was also a narrow, rutted dirt access road from the paved road to the far end of the property, about 200 feet up, and very steep. I only drove up that in my 4WD truck. Nobody in their right mind would attempt it in a car.

Until somebody did … lol … they apparently got the wrong address and decided they had to drive up that 4WD dirt road in their Pinto to attend a party invite at another neighbor’s property. I hear tires spinning, banging, dust flying everywhere, the lady driver gets out and asks if this is the road to the party … lol …

A friend lives 2 blocks from this site. Maybe it was her? She is odd.

I think 6 or 12 of us could take care of the problem on a Saturday morning. We’d even provide our own ammo. We were in downtown Columbus by the river on July 4 and the banks were so littered with goose droppings you hardly walk. Disgusting but the health dept didn’t seem to have a problem

For some bizarre reason, they have been a “protected species” for as long as I can remember.

Migratory Bird Treaty Act of 1918 - Wikipedia ? ‘The U.S. Fish and Wildlife Service issues permits for otherwise prohibited activities under the act. These include permits for taxidermy, falconry, propagation, scientific and educational use, and depredation, an example of the last being the killing of geese near an airport, where they pose a danger to aircraft.’

Perhaps, if they no longer migrate, you can get them delisted.

I lived on a mountain road in Colorado, stream between property and paved road, cross a small bridge, paved driveway to the main entrance.

You left that for San Jose?

Well there is a hunting season for them, but they are smart enough to not leave town.

Yep, another growing up in Minnesota in the 60s story, we could lay in the grass around the lake at Como Park. When we went up for my mother’s 90th birthday in the early 2000s, you would not even want to walk there. Same around Chicago, went to a training program north west of the city. You couldn’t walk anywhere without stepping in goose poop. Geese only flew about a hundred feet above the ground.
To make it car related, the company providing the training provided limousines to drive us into town.

In the 70s I did a lot of waterfowl hunting in Utah. Geese were included, but those in the western flyway flew very high, out of range for a shotgun, needed to be lured down with decoys and hunted from blinds.