Lunch on the go? 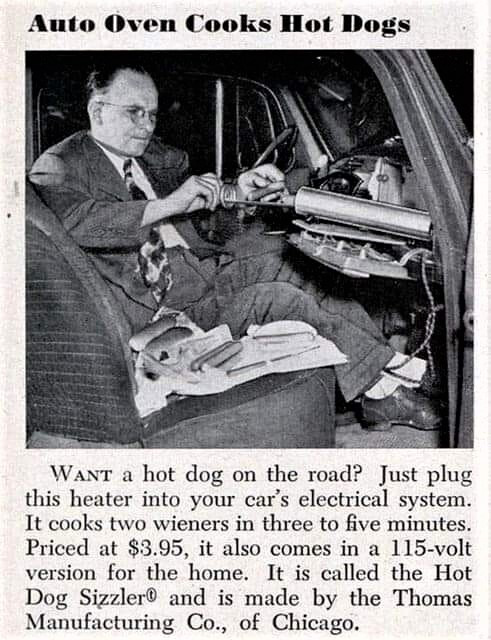 In 1959 VW offered the Hertella Auto Kaffeemachine as a factory option. They are rare nowadays, but there are a lot of 12V coffeemakers. Most look more like camping accessories but several look like they percolate in a cup holder. 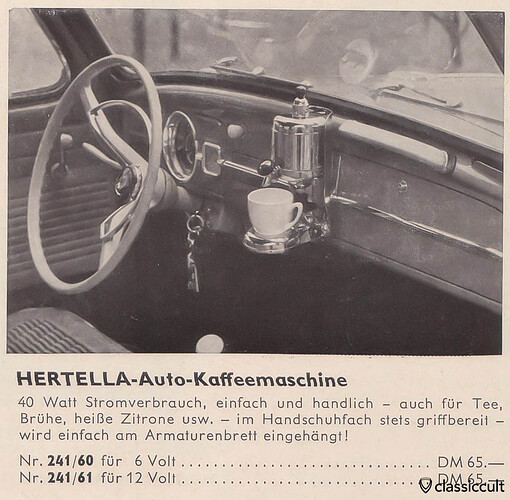 Isn’t a cell phone distracting enough in this day and age. Can’t imagine the accident numbers if these things were to be popular today. “Sorry officer I really didn’t see that light, I was making lunch”

I’ve always wondered about those 45 RPM record players that were an option back in the 50s and how in the world they would prevent the tone arm from jumping all over the place.

Or was that for use in non-moving situations only?

As for the hot dog maker, I wonder if the driver had to rev the engine to make that generator keep up with the power consumption? And the VWs were 6 volts until mid 60s and were around 180 watts if I remember correctly. Definition of “slow brewed coffee” maybe…

Back in the early 50s Harley used 6 volt vacuum tube receivers and transmitters on their police bikes. These were large, heavy units mounted on each side of the rear tire. The officer had to rev the engine way up to produce enough power to operate them sufficiently. Imagine having to carry on a conversation while on a revved up HD.

Folks wanted media for music in cars in 1950. The tone arms had extra downward clamping for “less” skipping. 8 tracks. Cassettes. DVDs. And on.
As Alan Jackson would say, don’t rock the jukebox.

I forget which model and manufacturer, maybe Chrysler, but the record player was only offered for two years because of all the problems. Of course then came 8 track. A paradigm; shift.

Gotta remember back in the 50s for travelers, options were limited, then came Macdonald. I didn’t know you could cook hotdogs on 12 volts though. A guy at camp had one he made but for 120, didn’t take long to zap a dog. Just two prongs mounted on a board and a lamp cord.
,

And some drivers would cook food under the hood, using exhaust manifold heat. I recall one article about this in a ca. 1960 Popular Mechanics or Popular Science magazine. Baked potatoes come to mind. I’d guess more than a few people tried this BITD.

OK , what the heck does that mean ?

Not sure but it should be…BITE, baked in the engine

One of my high school friends had one of those 45 rpm players installed in his car. Tubes rather than transistors, an old one even then, he found it used, at a flea market. It would play ok when driving as long as the road was pretty smooth. If it skipped once in a while , who cares? …lol … Audio quality from 45 records wasn’t very good anyway. Still, it was good way enjoy a little of Cream’s Sunshine of Your Love.

The hot dog gadget, that I don’t see, other than as a conversation piece.

I got it…BITD, Back In The Day

And some drivers would cook food under the hood

We did something like that in the steel mill. I sometimes worked on the hydraulic pipe leak tester. The hydraulics had a radiator that got really hot. We used to cook hot dogs on it. We got full fo ourselves one day and the operator called out on the inter Intercom that we had hot dogs for lunch. The mechanics shot back that they were steaming crabs in the shop while they waited for the next breakdown. We were suitably bummed out.

Many years ago my BIL worked at a steel mill. He’d tell us a lot funny stories about the unusual employee behavior, usually caused by the staff having a lot of waiting time b/c of some delay or another, before they could start their jobs. Their boss told them these delays were to be expected from time to time, just part of the process of making steel, and they could lie on the lunch tables and take a nap if they wanted; that would be acceptable behavior during wait-times. One of the employees decided if a nap is good, a nap using a pillow would be even better. So he took to bringing his pillow to work. Boss apparently didn’t take to that idea very well … lol …

I dunno, there is always stuff to sweep, straighten out, check, grease, etc. no need to get paid to sleep.

My bil would put canned items on his truck manifold for dinner. He liked spaghettis. I liked chili myself and same thing as the heated vending machines.

Pretty much everyday in a tech job, lots of interesting puzzles to solve. Sleep on the job? I don’t think so. Plenty of time to sleep after you’re dead. I couldn’t even figure out why my co-workers took scheduled breaks. If something needing doing hadn’t yet been done, my thinking is to work on it until it is done. Then if tired, take a break, better yet head to the golf course. Just b/c it is 10:15 am, imo that’s not a reason to stop working. I often got so focused on accomplishing the objective I’d forget to eat.

I worked at one place that you needed to police your work area and pick up any dropped nuts and bolts. I worked at another place that said don’t waste time picking up dropped screws. It costs more than the hardware. You. An argue each.

I dunno, there is always stuff to sweep, straighten out, check, grease, etc. no need to get paid to sleep.

It seems that you never worked in a shop with a strong union. All hourly employees have specific jobs. Electrical repairmen work only on electrical issues. Oilers add oil, no one else does. Laborers sweep and shovel up the messes that occasionally occur, not the people working on the manufacturing line. We had hydraulic units the the last mill I worked in. When it needed repairs there were 5 groups involved, all with at least one person. If it was dangerous work there was always at least two (buddy system). The electricians would turn off the power and lock it out. The mechanics would open up the system so that there was access to the parts that needed repairs. If hydraulic fluid had to be drained, the oilers came in to do that. If there was electrical work, the electricians jumped in. When mechanics were needed, they would jump in. Sometimes there were several layers of equipment that had to be removed to get at the problem. All workers stayed around until the work was finished. There were no repairmen that could have done all that work. Union work rules saw to that. Of course management representatives agreed to it. Management in union negotiations was not manufacturing management and agreed to these rules over time to keep the mill running. They could still make money. When foreign steel started arriving in large tonnages, they sold at much less than domestic mills. Japanese and European steel was high quality and cost so little because they could overcome transportation costs. The Japanese didn’t have crazy work rules and the Europeans were government subsidized.

History Channel’s Top Gear tried this during a challenge, sounds like something you’d try if you had no other options. 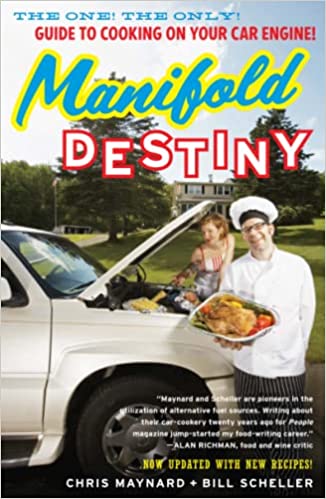 I remember someone published a car engine cookbook back in the ‘50s.
For a while, again in the ‘50s, my father was a stoker at a canning plant. He work cook or reheat his lunch in the boiler firebox.