Was the failure of old Lucas electrical components the cause of this embarrassment at QE II’s Jubilee Parade? 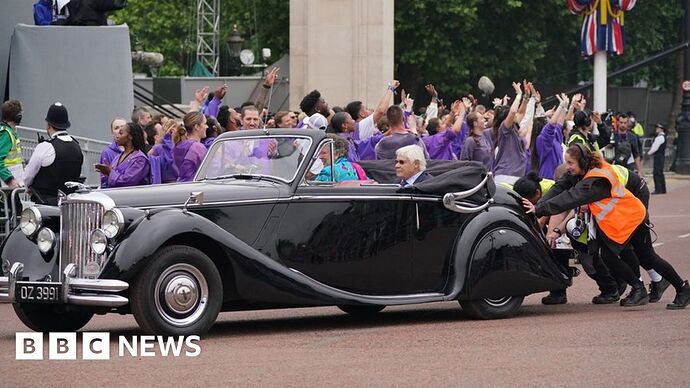 Lucy Davenport was driving Dame Prue Leith when the vintage Jaguar broke down on The Mall.

And, some vintage jokes about Joseph Lucas and his electrical components:

Lucas – Inventor of the self-dimming headlamp.

The three position Lucas headlight switch – Dim, Flicker and Off.

Lucas is an acronym for Loose Unsoldered Connections and Splices

The Lucas motto: “Get home before dark.”

If Lucas made guns, wars would never start.

Back in the 70’s, Lucas decided to diversify its product line and began manufacturing vacuum cleaners. It was the only product they offered which did not suck.

Q: Why do the British drink warm beer?
A: Because Lucas makes their refrigerators.

Did you hear the one about the guy that peeked into a British car and asked the owner “How can you tell one switch from another at night? They all look the same.“ The owner replied, “It doesn’t matter which one you use, nothing happens!”

Ah ha ha. I don’t want to upset a regular so I’d best not mention my Morris minor, but bet you can’t tell what year those are in the parade. Once the English perfected their body styles, they saw no need to change.

Guess we understand why the elite have their own mechanics.

The successor to the Minor was the Marina, which was an even-worse car. I knew a guy who bought a new one–circa 1976–and within the first year the crankshaft snapped. It was repaired under warranty, and a few months later, the replacement crankshaft snapped!

The dealer from whom he had bought it was a large multi-line dealer, and they gave him decent trade-in value for the Marina when he bought a Plymouth Volare.

From the frying pan into the fire…

they gave him decent trade-in value for the Marina when he bought a Plymouth Volare.

From the frying pan into the fire…

My folks had one of those too. Where is that post on dependable cars now . . .

In one of Lee Iacocca’s books, he said something to the effect of…
Some people would like to put a contract on my life because of the Aspen/Volare twins.

My friend was almost flattened by 18-wheelers on a couple of occasions because of the car’s habit of stalling as he was trying to accelerate onto an expressway. And, then there was the rust problem…

My folks bought a 78 new. I believe it was haunted. They tore the engine apart to solve an oil usage problem. The trans went out in Montana. 80 mile tow and two day layover for a new trans. Air cond leaked so after a recharge was only good for a short time. Don’t remember all the other issues but after a year traded the thing. After trading when dad came out from the dealer, the front tire had gone flat. His timing was always good.

Good stories about “Lucas” vexations … lol … For some reason UK folk seem to hold older cars in higher regard than here in the USA. My favorite car magazine – Practical Classics – is geared to owning and repairing older, yet still practical cars. UK available cars b/c it is UK published. PC would rarely cover a vintage Jag like that b/c it isn’t a practical to own that sort of car for the average person. Look at the photo to see why … lol … PC however would be very happy to cover a 60’s vintage Moskvitch 408. I think a Moskvitch 408 , presuming it could actually be started, would have made the Jubilee trip ok.

I like Hot Rod magazine and the like, which tend to cover a lot of interesting but complicated impractical cars; but I wish we had a magazine here geared to owning & repairing simple, practical older USA-available cars. I presume part of the reason no such magazines are published is b/c US car manufacturers want to sell their cars in high numbers, and therefore don’t want us keeping our older cars on the road for decades.

Never had troubles with my Triumph, but remember stories about English engineering, one being they decided to put rubber on the wheels of the trains to make the ride smoother, unfortunately wet leaves on the tracks were enough to prevent traction and immobilize a train.

If you ever get a chance to see the BBC mini-series comedy/drama “Detectorists” , part of the plot revolves around one of the characters who owns an older TR 7. He just loves his car, knows all its subtle sounds and other nuances, but is unable to keep it running on his own; and TR 7 knowledgeable mechanics are plain too expensive for a divorced man who’s job is working at a produce wholesale distributor (job bonus is all the potatoes you want … lol). Then fortune strikes. He meets a new lady friend, who he later discovers just happens to be an auto-mechanic, and TR 7 expert … yipee!! … he’s in hog heaven!!

they decided to put rubber on the wheels of the trains to make the ride smoother unfortunately wet leaves on the tracks were enough to prevent traction and immobilize a train.

IIRC, Michelin began the practice of using radial tires on the wheels of the Paris Metro, circa late '40s. They have never had a problem with traction, nor has the Montreal Metro, which uses the same technology. Surely you must have noticed the exceptionally smooth and quiet ride of the Paris Metro and/or the Montreal Metro when you rode their trains. If I recall correctly, the quiet and smooth Mexico City subways also use Michelin radial tires on their wheels.

Trains which use conventional steel wheels frequently have traction problems in the autumn when wet leaves litter the tracks.

I visited Washington DC then Paris on the same holiday years ago. I did in fact notice the improved ride on the Paris subway compared to DC. The DC subway’s ride was still pretty good though, no complaints from me about it.

Hey, this subway-talk turns out to be Car Talk related. One of the long running Car Talk radio program jokes involved teasing producer Doug Berman about his run-in with a Washington DC subway rules-enforcement officer. The complaint: D Berman was seen munching snacks while riding on the subway. Don’t know the outcome was ever discussed.

I’ve been on both but cannot recall the ride on any of them. Even took the train north from London To the lake country, and in Oslo, and Italy, and others. They all seemed the same to me. Just happy to get off again.

You forgot one “Lucas - The Prince of Darkness”

But having owned 2 MG’s, a Triumph TR6 and a Jag XKE, the “electrics” aren’t really all that bad until the owner decides “to start improving them”.
Let’s just say that the Brit’s designed to meet the requirements so if you had the audacity to add a more powerful radio, tape deck, brighter lights or fog lights …God help you.

On the other hand Italian cars seemed to be designed and assembled by guys who were on their 4th Grappa.
I burned out an entire fuse box when BIL decided to lower a window while I was I was starting the car. Adding insult to injury, the US importer commented, “Oh, we replace lots of these but we need to send to the factory for a schematic because they keep changing it.”

Sounds like the Jaguar in the Jubillee trip hadn’t been driven much at all before this, at least not at 1mph. I’ve read reports by US based collectors that the more they drive them the better the car runs and works.

The successor to the Minor was the Marina, which was an even-worse car. I knew a guy who bought a new one–circa 1976

When I was a kid growing up in Los Angeles “Uncle Will” from Portland, OR was coming to visit. His arrival was delayed by a week or so due to various breakdowns with his nearly new Marina.

Lucas made a capacitive discharge ignition booster for a BRM Formula 1 car that not only won the chapionship for Graham Hill in '62 but continued racing for 2 more seasons. The ignition box was mounted outside the bodywork to cool it.

On the other hand Italian cars seemed to be designed and assembled by guys who were on their 4th Grappa.

My foreign car specialist mechanic back in the '70s had a Fiat with major electrical problems (imagine that!

) in the shop for an exceptionally long period of time. I asked him why it was taking so long to de-bug that customer’s car, and he stated that the color of many of the wires in the harness changed from one color to another somewhere around the middle of the chassis.

I have no idea whether this was reality or if it was his idea of a joke, but I do recall that it took him a very long time to fix that Fiat’s major electrical problems.

Some of the Lucas-hate is similar to the sentiment that Chinese manufacturing is junk. China is perfectly capable of making world-class products, but they expect to be paid for it. And the reason American companies outsource to China is to save money. Yeah, a Chinese factory will build you a car out of pot metal and chewing gum if you want to pay $12 per unit because they don’t particularly care if YOU sell crap and are too cheap to pay them to make something good. But that doesn’t mean they aren’t capable of making better products.

I agree.
A good example pertains to those robo-vacs for the home. The first one that I bought (the brand name escapes me at the moment) was not very good. I replaced it with a Chinese-designed, Chinese-made Eufy robo-vac, and it is clearly a superior product in every way.

In defense of the Foreign carmakers, in the wake of WW2 it was tough to find the money to rebuild the factories, design new products and build a quality product with a restive workforce, a situation that existed through the 1960’s.

For example, on the design side the VW Beetle of the '60’s was virtually identical to the pre-war Beetle, same with the Citroen Deux Cheveau, the '50’s MG T’s and the most popular Brit sportscars which were built with redesigned bodies over slightly modified 1930’s “Bin Parts” (including tractor engines and ladder chassis).

On the production side, looking at period factory pictures it’s sometimes hard to distingush from pictures of a Ford Model T assembly line. And further complicating the situation was a workforce which was fed up with the continuing shortages and frequently striking. Not surprising that the Foreign car quality wasn’t always up to scratch. 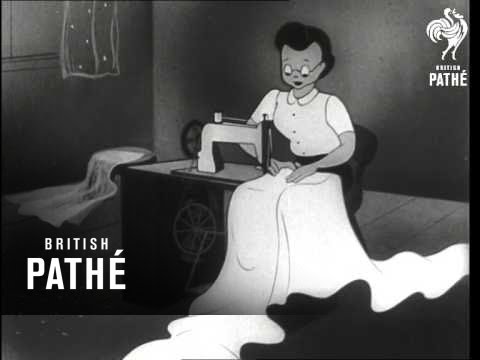