I’ve been slowly upgrading my Mustang over the past few years. The latest addition was pair of American Racing long tube headers. Due to Covid 19 my tuner was running about 2 weeks behind schedule, but eventually a slot opened up and he installed the headers and dyno tuned the car.

There were a couple hiccups along the way. First there was the issue of the connecting pipes (the pipes that connect the headers to the X pipe), I was sent two passenger side connection pipes. Since these were catted pipes, that meant that their was a problem. Instead of sending the wrong part back and waiting another week or more for the correct pipe to show up, the decision was made to usethe other passenger side connecting pipe and simply move the bung for the O2 sensor to the correct orientation and then fill in the existing one. This worked very well and didn’t take very long.

The 2nd hiccup was electronic in nature. My car has the Ford Racing Stage 2 power pack which consists of the GT-350 air intake, the GT-350 87mm throttle body and a canned tune. It turns out that the canned tune cannot be edited effectively. My tuner’s tuning software/hardware could not access it or pull data from it. He said he’d never seen that before, and suggested that the stock tune be uploaded to the car before he could continue. Luckily I had the stock files saved on my computer and on the tablet that was used to install the tune when the stage 2 power pack was installed. But I had to make a trip to the shop to deliver the tablet and the Ford Pro-Cal device that you need to use to flash the ECU back to stock. After that episode the tuner was able to get to work. He manged to get most everything right but the car was pulling timing at high RPM. We both suspected the 87mm throttle body which is notoriously difficult to tune for. He decided to use the base tune from the GT-350 to get the the throttle body to work correctly and then change the other parameters to things that he typically does when tuning Coyotes. And it worked!.

Originally we were thinking that it would do around 430 HP at the wheels. But it ended up exceeding that by a fair margin. We were both very happy with the results. 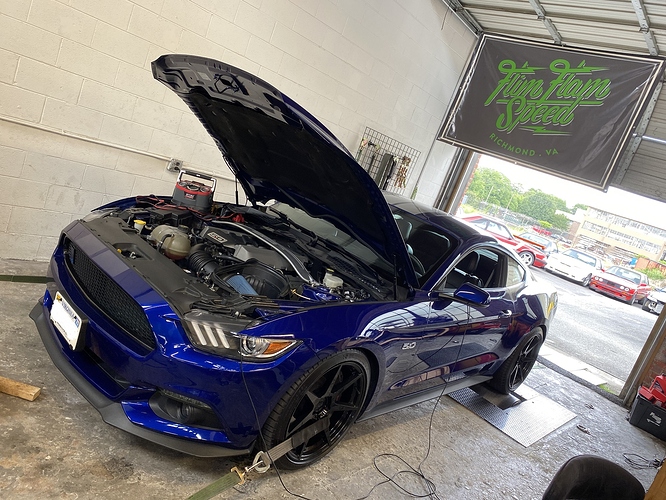 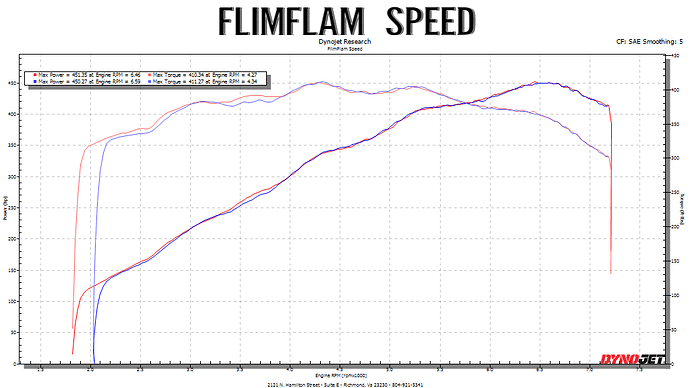 What do the red andblue lines represent? The red line seems much more desirable. Negligible difference at high rpm but the red line gets to 300 hp 200 rpm earlier.

VERY nice results for headers and a tune. Typical Coyotes with the 420 hp stock tune typically will put down 380 at the wheels. Cracking 400 hp takes few parts plus a tune.

I’ve read that headers are worth 10% on the Coyote and are a serious headache to install on the S197 body, not sure the S550 would be any better. But 450 at the wheels and 410 ft-lbs would absolutely be worth it. And that broad, flat torque curve! Whoa.

Congrats, that is a fine result!

What do the red andblue lines represent?

I’d guess it represents back to back runs with the same tune. The dyno operator started his run 200 rpm sooner on the red line run.

Originally we were thinking that it would do around 430 HP at the wheels. But it ended up exceeding that by a fair margin.

That last ripple peak in the torque, corresponding with the HP peak, suggests the runner lengths are just right to maximize the peak HP.

This should be the ‘go to’ post when folks ask about ‘cheap and easy’ ways to increase HP. It’s not cheap and it’s not easy, but the results are impressive!

@FoDaddy didn’t say how much just the headers cost… but I’ve seen them with catted pipes for about $2000. Installation is a day job with the right tools so $400 to $1000 depending on the shop and then the tuner and the dyno time.

Turbo cars can get that with just a tune to increase boost. NA cars need a little more work (and $$)

The headers were about $1700. Install and tune was around $1500. Not the cheapest modification you can do. There are still some minor bugs in the tune (due to the throttle body) when the engine is cold the throttle is very “jumpy” it goes away for most part when the engine warms up. My tuner says that if I go back to the stock throttle body he can smooth it out, and wouldn’t charge me for the revised tune. Weirdly, putting the car in one the other drive modes (which adjusts throttle sensitivity) seems to actually improve things.

No problem. Just use the gas pedal in a binary fashion.

My tune has the throttle a little lazy and laggy until it warms up a bit. And I still have the standard throttle body. Hmmm…

Very, very nice when you’re getting that much power where it needs to be; at the rear wheels. Very pretty color too. I’m a sucker for blues and greens.