What did I do wrong

Soooo I bought some long headers and tried to install it this weekend but the passenger header would not go in,so I started disconnecting lines and cables to make some space and I think I disconnected a line wrong.to make it better I’ll give you a step by step instructions of what I did.

First I jacked it up and remove the catalytic converter pipes and then moved on the remove the stock headers.
I removed the steering shaft that control the wheel (for space) and then I removed the spark plugs wires,I replaced one wire that was kinda bad.
After that I removed the sparkplugs and after a whole day fighting with the emissions pipe on the headers I got em off,Saadly the headers did fit on the passenger ,only way was to remove the transmission or lift the engine so I gave up,all that work for nothing.

Disappointed I put the stock headers back, emissions pipe,and reverse the process .

Now I have idling problems where it sometimes stalls on “N”,back pressure,and it sounds like the engine is skipping a beat if you know what I mean,also a code (bank too lean) .

I was thinking spark plugs going bad,i did spray em with break clean to clean em up before putting them back to the engine.
Also exhaust leak?
I unplugged ac line and some other lines (pic provided)

I hope you can help me and thanks for staying and reading all of that. 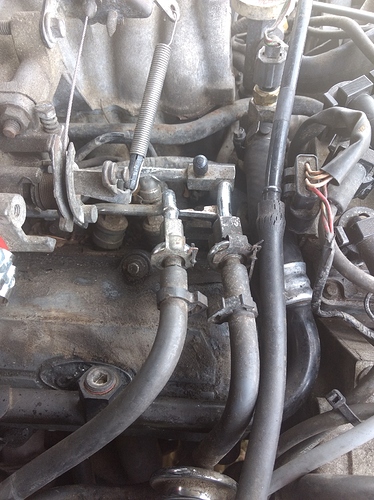 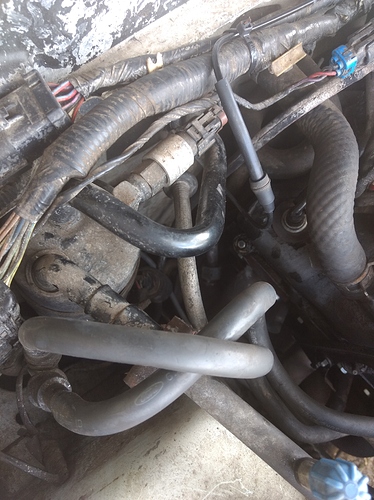 Not sure what you are trying to show me with those pictures but from you description, I’d start by looking for any break in the intake system after the MAF sensor. You may have disconnected a vacuum line or a return air line in the intake duct between the air filter and the throttle body. Most likely you tugged on a vacuum line that connects somewhere around the throttle body.

@keith’s suggestions are sound. You can easily damage or disconnect an air tube, vacuum line or even break off plastic fittings. I’d add that maybe you have an exhaust leak between the factory exhaust manifolds (headers) and the heads. Many cars don’t have any gaskets from the factory and you remove the manifold and it warps and small bit and will never seal again. That can cause a lean condition error plus the noise. Let it cool overnight and feel for the exhaust pulse right after a cold start.

I’d also suggest doing more research before tackling such a task so you don’t get caught out like this. I don’t have headers on my Mustang because it takes about 10-15 hours with some really hard to reach bolts.

Before I start working on a car or motorcycle I drive it to a self service car wash and wash down the engine and whatever parts of the frame I’m going to be working on. Don’t squirt directly on to electric black boxes and don’t squirt down the air intake, of course. Once you finish start the engine right away so it will dry off fast. Some folks leave it running while they wash things, but if you do that stay far away from the air intake with water, and prepare to get really wet when the spray hits the fan. If it was me, I’d wear goggles.

You say that there is a exhaust leak now.

I wonder if you have a wire or small vacuum hose pinched between the head and the exhaust manifold.

This was not a job for a novice!!!

Good for you to give it a go. I’m guessing either an exhaust leak, vacuum leak, or ignition system problem, like 2spark plug wires reversed, or one spark plug wire got damaged in the process. You said above you found one bad spark plug wire and replaced it already. But maybe there are others. Ohm out the spark plug wires, and if that check out ok, run the engine in a dark environment, looking for sparks flying around in the engine compartment , indicating where the HV insulation has been damaged. My first guess however: exhaust leak.

firing order. oxygen sensor. check the plug wire you replaced and make sure that plug is firing. check to makes sure all the plugs are firing.

but that thing about to lean code has OX sensor written all over it. the code might narrow down which bank, which header with the sensor in it. This is a V-6? (twisty tube headers on a V-6?) then there’s that thing about the emissions pipe.

headers are a pain usually. sometimes it’s finding an angle, like moving a couch through a door smaller than the couch, then poof, it’s in. Often, you don’t have to pull the trany, just loosen the mounts and even the engine mounts to move them. but it ain’t easy. You need a helper and lifts and pry bars, pipes you can pry with, and sometimes a good nights sleep.

When I was a teenager – many years ago – the kids in my school kept asking me when I was going to install headers on my 62 Ford Galaxy. I think that car had a 170 cu inch motor. Straight 6. The exhaust system wasn’t its main power limitation anyway. For the life of me I couldn’t figure out why they kept asking me that question. And another problem, I had no idea what “headers” were. I coaxed it out of them that it had something to do with the exhaust pipe, but was too embarrassed to ask beyond that. … lol …

Picture are showing the lines I disconnected

The car ran good before,is a bit disappointing that just removing and putting back exhaust system would cause Soo many problems

Sounds good, but ive spent Soo much time looking at the engine that I can draw it without looking at it .

I THINK I GOT IT!!!
this morning I went back with a rest mind and followed all the lines and cables to see what I did wrong and was surprised when I saw the new sparkplug cable I replaced be at a unusual place,the cable I replaced was longer to I thought it went to the farthest sparkplug but in reality it was to the middle one,I drove the car this morning and all the symptoms are gone,well I still have the code bank too lean but is a easy fix.

I was Soo stressed to get those aftermarket headers installed that I takled it after work (I work 12h shifts overnight) powered by redbull so my head wasn’t at a perfect state so I made that mistake,and after all it didn’t fit how I wanted them.

Thanks to all you guys that gave me your opinion it encourage me to check all lines and run the car cold to check for sounds and flow.

well I still have the code bank too lean but is a easy fix.

Don’t wanna scare ya, but a too lean code could still be an issue with your header install. If it was diffiicult to get them installed, the chances are very good that you could have an exhaust/air leak at the heads- which could could cause the computer to not be getting accurate readings from the o2 sensors- and try to compensate by adding or cutting back on fuel (ie: your too lean condition.)
(this is some of what Mustangman was talking about in his earlier post.)

I will be doing a inspection later ,lift it up and take a last look before calling it fixed.