Not likely. Extensive damage to lower face, neck, upper chest. Surgeon said they have to wait and see how much tissue dies, remove dead tissue, cover with cadaver skin. After tissue regenerates, remove cadaver skin and wait for his skin to regenerate. After that there may be more surgeries and procedures required.

I can’t find anything that says what type brakes

If Jay was burned while working on the '07 White Steam Car, then this video shows so much about the car including how Jay might have gotten burned. In the Video, when he was starting the burner (4:45) he says, “Notice how I burned my hand.” Perhaps the fuel was over pressurized, perhaps he did not light the fuel right away and it accumulated, so much yet to come out…

As for the Brakes, in the video, you’ll notice that it does not have an front brakes. In the screen shot (0:56) of the Rear Wheel, I would guess from the linkage visible in the forward part of the brake assembly, it appears to be mechanical, not hydraulic. And the screen shot (1:11) showing the rear view of the vehicle, the brakes appear to have external shoes that are hinged (pivot point) at the rear and probably mechanically tightened in the front assembly. 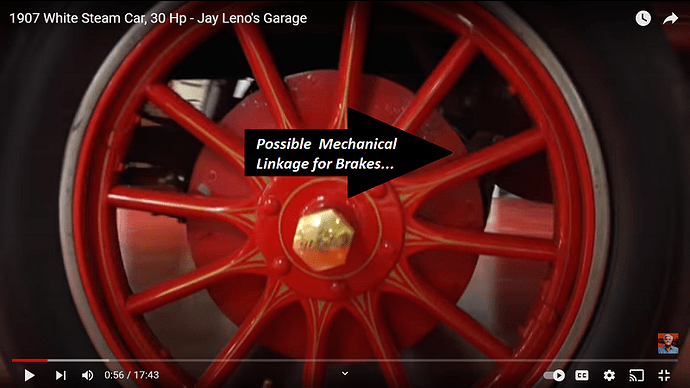 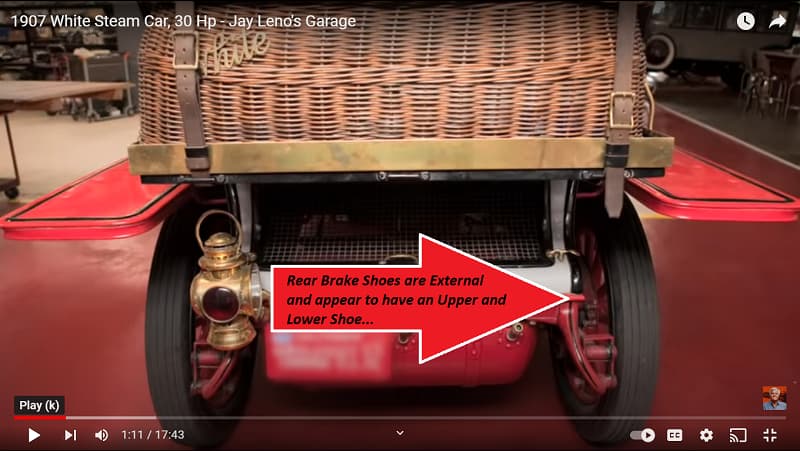 I have written much about my '54 Dodge Meadowbrook and the point I want to make is that the Emergency/Parking Brake was on the Drive Shaft. On the rear of the 3-speed manual transmission was mounted a “brake shoe” and the shoe had a wraparound pad that when the brake was applied, the linkage squeezed the pad so it clamped down on the drum. As a friend once said, it works like tightening your belt to keep your pants from falling down…

As for the Brakes, in the video, you’ll notice that it does not have an front brakes

Reportedly Jay was working on his Doble, not the White. As to the White Steamer, hydraulic brakes had not been invented in 1907. The White was one of the 2 first cars in the White House garage. The White Steamer and a Pierce Arrow ICE car. Both built in Cleveland, Ohio. President Taft, an Ohioan, ordered them. The White for him and the Pierce for Mrs Taft.

Front brakes were considered dangerous because people thought the car would flip over the nose. Manufacturers also had not figured out how to mechanically apply the front brakes so that turning did not apply them inadvertantly. Front brakes did not show up on cars until about 1920. Hydraulic brakes appeared as standard on Duesenberg cars in 1921.

Your 54 Dodge’s driveshaft band brake is dangerous. If an axle breaks, the e-brake won’t stop the car because of the differential.

TMZ’s interviewer with Leno says it was the White. I hadn’t heard it was the Doble.

I don’t know how many years Chrysler used the drive shaft emergency brake, I do know my brother’s 57 Dodge had one. At that time the push button automatic transmission did not have a parking lever.

I do know my brother’s 57 Dodge had one. At that time the push button automatic transmission did not have a parking lever.

It was the same with our '59 Plymouth.

It sounds like he’s getting excellent treatment. Biggest concern for burn victims probably is preventing infections while wounds heal.

I do know my brother’s 57 Dodge had one. At that time the push button automatic transmission did not have a parking lever. 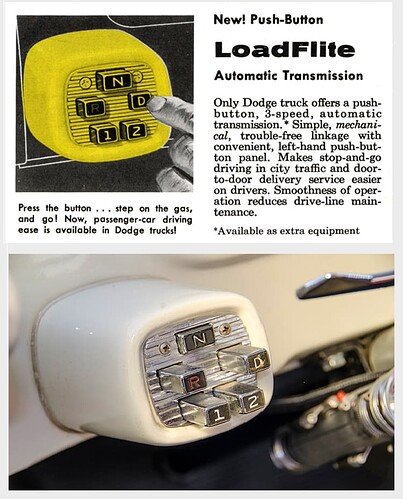 Parent’s 1950’s Chrysler Windsor had that gadget. Seems like a bad idea safety-wise , but during my mini-me phase, my dad would let me sit on his lap during a drive, help w/the steering, and I’d press the shifting buttons too. I don’t recall it having that exact configuration, but pretty similar. Maybe only four buttons.

I’ve gotten my hair singed but never really burned. I did have chemical burns on my legs though from kneeling in concrete pouring my patio. It was weeks before I could bend my knees again and after 30 years (for Nevada-he always wants to know how long) I still have scars and don’t wear shorts. I don’t wish burns on anyone. Off topic but read last night about how the Scottish highlanders would skin their captives alive.

I think that your recollections are “off” by a few model years, George.
Chrysler introduced pushbutton shifting on their cars for the 1956 model year, and they continued that design through the end of the 1964 model year.

The 1955 Chrysler products with automatic transmission used a small dash-mounted lever, just to the right of the steering wheel. Prior to the '55 model year, all Chrysler products used a conventional column-mounted shift lever.

For the older set who remembers when most cars had carburetors and some “shade tree” mechanic tried to start a car by pouring gas directly into the carb while someone cranked it over only to have it backfire and set the open container (cup, bottle, can, etc…) on fire and in some cases, the person pouring the gas, the engine, or even the garage? 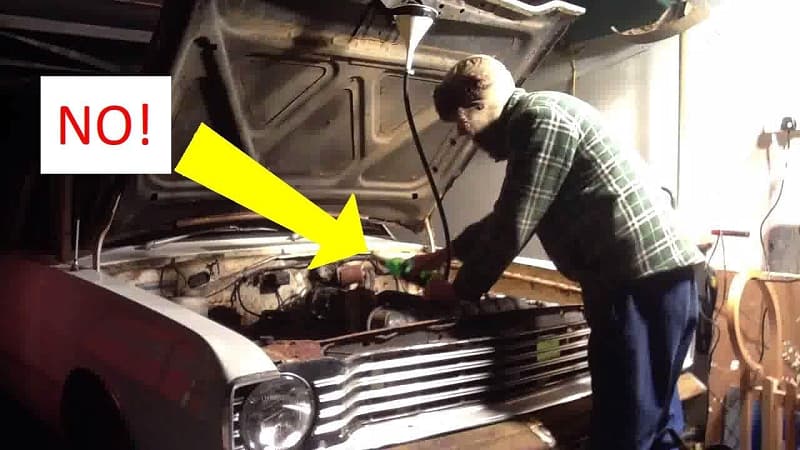 Yeah I learned that lesson. Wrecked my rain coat trying to put the fire out. Car started after that though and just needed a few new plug wires. 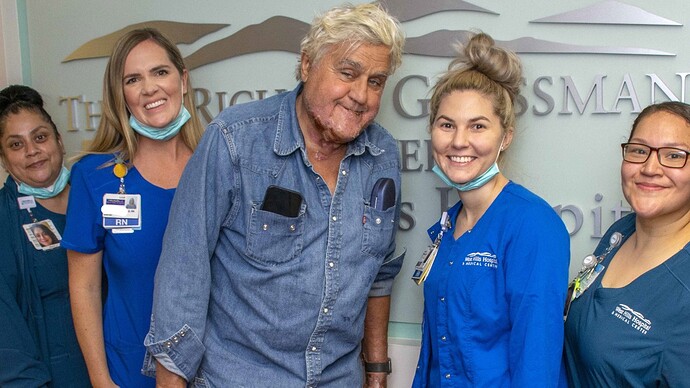 Jay Leno has been discharged from a Los Angeles area hospital a little over a week after he suffered “serious burns” in a gasoline fire in his garage. Staff from the Grossman Burn Cente…

The doc was on a YouTube last night, said he was a model patient. Giving out cookies to people and following instructions. At one point he said not the hand I write checks with. With him the best.

I like that shirt Jay Leno is wearing. Wonder who sells it? Looks both comfy and practical.

Looks both comfy and practical.

I can say from may years of experience of wearing the same type of shirt it is both comfy and practilcal. Is what is called a western wear it has two pockets with snaps and spaps down the front instead of buttons. They can be found at western wear shops and also on Amazon the ones I wear is made by Wrangler.

At least in his garage! I’ve been watching his show for years now. As a cord cutter it’s a great show you can watch for free (Youtube).