Technically, I could also toss in a carbon mono oxide meter in my car…

I strongly recommend that you go to Home Depot or Lowe’s, and buy a battery-powered CO detector to keep in the car.

I don’t know if you have knowledge about this, but besides the CO problem, will this leaking flexpipe sit out my 6K miles till September?

Oh for Pete’s Sake . That pipe could finish breaking completely tomorrow or last for a long time . Just have it repaired as soon as you can that way you won’t cause the next owner to have a life threatening experience . As someone who has had CO poisoning the thought that you don’t want to fix this is annoying.

Of course I rather fix it than do something else. Money wise I have encountered way more problems with my car than anticipated, and I really have to pick what and how to fix it as cheap as possible, hence why I really want to make sure what my options are.

For your comfort, I just called a muffler store who said they would fix it anywhere in the range of 90-140 bucks. I get a quote before fixing it. That, I can easily get behind.

A couple of winters ago my son borrowed my spare car for a few weeks. the motor went on his. he was working 60 hours a week for a month or so. he would come home exhausted. one of those winter nights I heard a car running outside. the exhaust sound was not one from my vehicle. well, that’s what I thought at the time because the car I lent him was quite when running. well after listening to this vehicle running outside for about 20 minutes my curiosity made me get up and look out the window. I see my son outside with his head slumped over. I ran outside with no coat, no shoes to get to him quick. I started shaking him to get him up. luckily, he woke up. it scared the hell out of me. he did not even remember dozing off. now was it from the exhaust leak or from being so tired? luckily, I think it was from being tired because it was really windy out. but what if it happened not to be windy out? it could have had a different outcome. why take a chance for a few hundred dollars?
oh, and he did get an earful from me. for not telling me about the exhaust leak so I could have fixed it. and for driving so tired.

Damn tough story… Really glad that in the end all went (relatively) well and no real harm happened to your son. Thanks for sharing

I also minor dose not from an exhaust leak but rom hauling about 200 pounds of dry ice in the back of the van that I had at the time.

I also minor dose not from an exhaust leak but rom hauling about 200 pounds of dry ice in the back of the van that I had at the time.

You can’t get carbon monoxide poisoning from dry ice, which is frozen carbon dioxide, You can, however, end up just as dead.

For everyone’s peace of mind, I got it fixed for 240 usd total. The ‘burnt’ flexpipe got replaced by just a piece of pipe. The bigger flexpipe next to it by a new flexpipe (if I remember correctly).
Sadly, my V6 sounds like a hybrid now. Apparently the leak was bigger than I thought, since it was way louder before. It is as silent as an EV now.
However, I do not feel like I lost any power.

Edit: Thanks for all the help here, appreciate that

glad you got it fixed!

However, I do not feel like I lost any power.

You probably gained some by restoring the back pressure you were losing through that giant hole.

I always thought flex pipe leaks sound like the car is farting. Not really an exhaust note I would generate with pride. 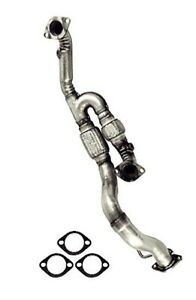 But anyone that likes that sound can buy a fart can easily.

Glad you got it fixed and the price was less than I paid fopr a simiar price on my Hyunsai.

The shop probably used regular steel, or aluminized steel that loses its protection when welded, instead of the original 400 series stainless steel. It will rust through in 2 to 10 years depending on environmental factors, use, and if water tends to sit inside that section of pipe. Water shouldn’t since it’s so close to the engine.

It will rust through in 2 to 10 years

With all due respect, it doesn’t matter at all

I’ll make sure to not buy a used car from you!

I’ll make sure to not buy a used car from you!

That’s ok, I wouldn’t buy a new paperclip from you.