I’m trying to install a kill switch via fuel pump wires by splicing the wire and adding a switch in between. I used a multimeter to identify the correct wire to cut, but there are 2 wires instead of just 1. All the videos and posts I’ve researched only have 1 wire to cut. I stopped here as to not create more problems for myself. 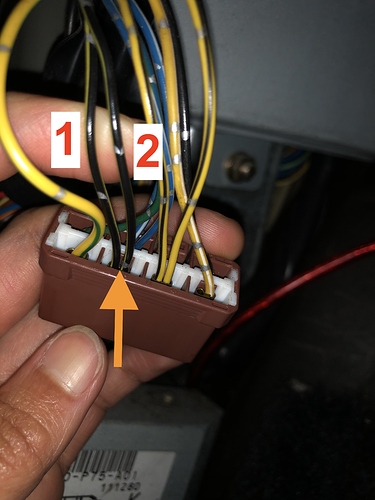 Why ? Doesn’t your vehicle already have the immobilizer circuitry ?

Mainly for added security. My car has been broken into twice without the windows being broken, my best guess is that a shaved key was used. I don’t leave anything in my car for this reason. Luckily the car itself wasn’t taken, but I’m concerned because two friends of mine (who don’t know each other, and live in different cities!) both had their Integras stolen. Another honda/acura key from the same era opens and starts my car, so I’m looking for other ways to avoid theft of the vehicle itself.

Any other suggestions are also appreciated! Just figured I’d do a hidden kill switch since it was (relatively) easy, til I ran into the 2-wire issue described above.

It looks like both of those wires go into the same pin on that connector. Are those 2 separate wires? I assume they are as it would make no sense for them to rejoin a few inches up.

Why not ise a double pole double throw switch?

That is a switch with 6 terminals on the back. 2 switches in one. You will use 4 of the terminals.

Why not ise a double pole double throw switch?

Or even a double pole single throw

You need a wiring schematic to identify the wires. Looking at the picture I would have guessed that the 2 black wires are both on the same slot in the multi pin connector.

I think that was the comment that they both terminate together so they are like one wire at that point. When I did one I just pick the positive wire for the switch. But there was just one wire. Main thing you are on the fused side.

Thanks for the input everyone! After doing more research, it turns out the fuel pump wire being accessed from under my rear seat was the most fool-proof way to go; it’s one of 2 wires in that location, so it made it a lot easier to identify. Cut the yellow with green strip wire, leave the black one alone. boom.

If anyone here has a G3 integra and is trying to do the same, hope this helps simplify things.