…that you aren’t the Secret Service agent/driver who screwed up the president’s limo today.
This will probably not be cheap to fix! 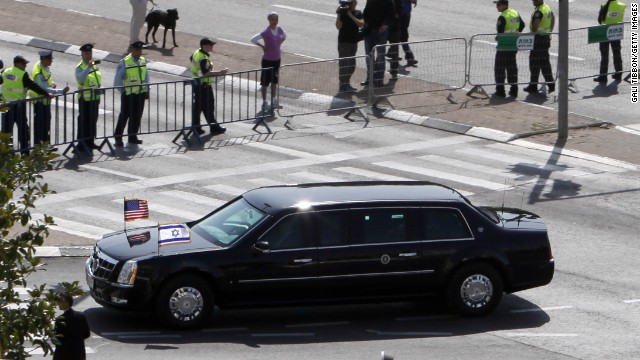 Presidential limo breaks down ahead of Obama's arrival - CNN

The official limousine awaiting President Barack Obama's arrival in Israel malfunctioned after its driver refueled it using gasoline rather than diesel fuel.

I’m sure he’ll never live that one down. As they said, that’s why they bring multple vehicles.

I guess it could have been worse. He could have been busted in the Secret Service scandal in Columbia last year. I wonder if Hebrew (non-english) labeling may have had something to do with it?

The labeling may well have had something to do with it, but I also have to assume that the filler nozzles in Israel are different from the ones in The US.

Gasoline is often priced less than diesel fuel so maybe the secret service driver was trying to save tax payers’ dollars.

Its a diesel engine. Its actually a tank chassis with a Cadillac body on it. They put gasoline in it and it fried the engine.

Well it happens to the best of them. My wifes cousin did that in Norway on the car they rented. There were no signs or tags warning it was a diesel and really they are so quiet now, its hard to tell. Who would expect a Caddy limo to really be a diesel truck inside?

“Who would expect a Caddy limo to really be a diesel truck inside?”

A driver trained to take car of his ride?

Stuff happens, We have all been through it, let it go,

It revealed an interesting aspect of Presidential transport. I never would have thought of flying those things all over the world. I’m surprised they don’t fly around a fuel truck, too. Maybe they will now. I also think it’s interesting that it has a Cadillac nose, despite being a custom vehicle. I’m surprised they play favorites like that. Maybe they have a faux-Lincoln nose they can stick on it, too. Or they could have it some anonymous shape and do a Nascar-style film wrap so it could be whatever he wanted that week. Anyone for a Corvette limo?

Ike’s limo was a Caddy too but Kennedy’s was a Lincoln. They have always been either Caddys or Lincolns as far as I can recall. I’m wondering whether FDR had a Chrysler though?

FDR was driven in an armor-plated Cadillac Limo, and according to legend, it was the one seized from Al Capone after his conviction for income tax evasion. When he drove himself on the grounds of his Hyde Park estate in NY’s Hudson Valley, he used a Ford roadster with special hand controls. Those who drove with him reported that he drove a bit too fast on the dirt roads of his estate.

Harry Truman had a Lincoln as his parade car, but his personal car–purchased after retirement from the presidency–was a black '53 Chrysler New Yorker, powered by the new 331 c.i. Hemi V-8, with chrome wire wheels, 2-speed PowerFlite transmission, and a tan velour interior. Harry dearly loved that car, and he and Bess took several epic road trips in it. Bess always believed that he drove too fast, but…who knows whether he really did or not.

If you want to see photos of FDR’s Caddy, Harry’s Lincoln, and a few successors’ limos, take a look at:

The Top Presidential Limousines of All Time

President Obama's new beast of a Cadillac was the latest in a long line of rides stretching back to 1899.

If you want to read an interesting book on the topic of good old Harry and his Chrysler, I suggest that you find a copy of Harry Truman’s Excellent Adventure, by Matthew Algeo. It is a quick and pleasant read.

So we really don’t know for sure why it broke down? I’ll have to catch Fox news on this one. They always know the facts and are the first to give us the inside scoop. Like, I think this is just a skam so Obama could play a few more rounds of golf instead of being where he should.

With respect to @VDC, I had a Desoto for first car, with a 331 ci and two speed auto. I hope Harry never had to pay for his own gas or out accelerate any one…it was a beast in the worst sense.

The article said that they fueled the diesel with gas. That would do it. But of course subject to a full investigation.