It's close enough to an automobile

My 14 year old Snapper riding mower seemed to be running rich and then last week the cylinder filled with gasoline so I pulled the carburetor and found an O-ring deteriorated at the inlet to the needle/seat housing. After a frustrating effort to find the correct part on line I went to the dealer who sold me the mower and found that he no longer carries Snappers but did carry parts. The carburetor kit would cost $55 and would take a week to get it. I tried 2 other local sources and got similar answers. Briggs and Stratton has become the holding company of several low end product lines and they have farmed out several components to Chinese suppliers. It’s nuts out there and my old mower was at the leading end of the nightmare. The identification numbers for this machine are more complicated than the VIN on a late model car. And while the Snapper brand is still advertised it’s just a label pasted on whatever product is being sold. If a local hardware store sells the Snapper brand his competition can sell the identical product with any of several MTD brands on it and swear it’s a better product I’m sure.

So much for keeping something well maintained.

If you can’t find the parts here?

It may be cheaper to buy a Chinese replacement carb on ebay.

I use jacks small engines a lot for mail order. I’ve also got a couple more or less locals that usually will have what I want-like a coil, right away if I want to drive a little. We have a Snapper mower and blower at the cabin which were inherited but they both have conventional Briggs engines. You heard the Snapper story and Walmart so they have now dumbed the brand down. I’m no fan anymore but compelled to keep fixing them.

One thing I look for when I buy is to make sure it is not one of those Chinese Liquid Combustion engines. Even though I know Briggs and the others are largely made in China, the parts are still readily available. In fact I usually just stock carb kits and some other parts so I have them when I need them but yeah the prices have been going up some.

Taryl the lawn mower guy on youtube did a spot on carbs not shutting down and flooding the cylinders. Sounded like it was a pretty usual thing to happen. I don’t remember what exactly the issue was though and have never had it myself. This might be it.

The problem with a lawn mower in the summer is you’ve got to have it running at least within a week or you have to rent or buy. Same thing in the winter with a blower but don’t always have a week.

I gave it my best @Tester but found no listing for a kit for this carburetor there.

And @bing, while I have gotten some great information from youtube videos the duds greatly outnumber the winners. My problem carburetor’s problem was quickly diagnosed once off and the bowl removed. And if only Nikki had used standard O-rings I would have been up and running quickly.

And about Tyrel, could he be peddling Dr Bukk fake teeth as well as repairing engines?

And about Tyrel, could he be peddling Dr Bukk fake teeth as well as repairing engines?

Actually he’s got a small engine service I think in central Indiana or someplace in Indiana. Been in the business for many years from what I can tell. Yeah he does silly skits but then gets down to how to actually diagnose and fix small engines, mowers, blowers, etc. Entertaining, silly, but good information. I think he sells T shirts and stuff but no teeth.

I bought a small ball valve from TSC (Tractor Supply Corp.) and put it in the fuel line for my Briggs tractor engine. I turn it off and let the bowl go mostly empty before shutting off. This completely solved my engine flooding problem.

Like you I have those valves installed on all my larger engines and use them religiously but my problem engine didn’t suffer the usual ethanol problems. The sealing O-ring that failed looked like it was dry rotted. And curiously there was an organic sediment in several narrow openings in the carburetor body and a clean fuel filter and air filter were in place as they have from day one.

Must we spend many thousands of dollars in order to get well made, reliable mowers that can be maintained for a reasonable useful life?

Must we spend many thousands of dollars in order to get well made, reliable mowers that can be maintained for a reasonable useful life?

For a riding mower? Yes, absolutely.

If you can figure out the specs for the o-ring you can usually find a replacement online.

Snapper, schmapper, all that really matters is the B&S engine info and/or carb number. Maybe if you posted the details, someone here could either find it or give you a cross that will work…

The carburetor is a Nikki 698945. It has no anti anti-diesel solenoid.

Cool.
Are you sure that the rebuild kit has the seal in question?
I looked at this reference and don’t seem to be able to see the seal or part that has the seal on it. Can you find it?

No @TwinTurbo, that particular piece does not seem to be displayed in your link or similar sources that I found.The part # 135A designates an ‘after code 07122500’ while my code is prior.

All exploded views that I find display a transfer tube gasket that is similar but not identical to the one I need and leads me to believe that either the displays are just generic and shouldn’t be used as a visual go-no go determinant. But then at the price of the kit I would like to avoid pouring cash into a bottomless pit.

I found this carburetor 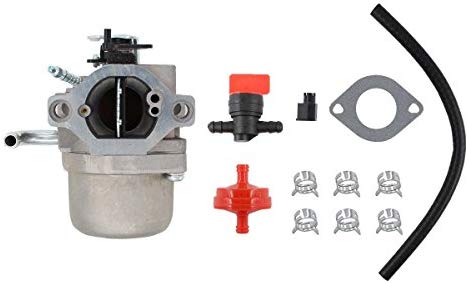 which is identical in appearance but without dimensions I can’t be certain. At that price I may take my chances with it and if it’s a bust I’ll just roll this old horse off to the scrap yard.

Well FWIW I just ordered the carburetor linked above.

That is confusing- it shows carb but title is rebuild kit.
Hope it works for you.
The small parts illustrations can be confusing as well. I took that to mean one vs the other. Prior to 7122500 was the other assembly depicted.

The O-ring that was the problem in your video is the one I found to be leaking @TwinTurbo. But the exploded views of carburetor parts did not show a part that matched in relative size or was described as the correct part. For a few dollars more they could include all the possible incidental parts for a range of applications since shipping, handling and parts sitting on the shelf are far more costly than the actual parts.

I agree. I’ve had that happen a few times, mostly with marine OB carbs. I find it hard to throw out the extra parts and a few times I found a use for them in a pinch.

It’s irritating when the one part you need is not in a “rebuild kit”. Hope you get the one you need, just lousy parts description…

Oh that is pricey for a carb kit. I think mine were always under $25. The other thing is you can check on the whole carb. I got a replacement service carb for my snow blower for $20. That wasn’t the problem and got a new engine instead but now have a spare new carb.

The other thing is to just call Briggs and talk to a tech. They are very helpful and will give you the actual part number you need. Then you can just search using that part number or order it from them. They are about the same price as Jacks usually (or a little higher). I remember ordering a couple clips for my water softener though and the clips were $4 but the shipping was $10. 20 years from now who cares?

And the tentative conclusion is that the $20 Chinese carburetor arrived yesterday and I installed it and the engine started on the first pull of the rope and ran about as good as it ever did.

While I prefer domestic parts for domestic automobiles and lawn equipment I was amazed first that the Briggs & Stratton engine had a Chinese Nikki carburetor and second that after a great deal of frustrating searching on the www I found what turned out to be a virtual identical component that was packaged with a new hose, shut off valve and filter for less than 1/2 the price of a non stocked carburetor kit at local B&S servicing dealers.

So for now I feel somewhat satisfied in my effort to keep the clunker running a while longer. For some reason repairing it had become a challenge.

Thanks to all for their input, advice and insight.