Is the dealership obligated to disclose a recall when selling a vehicle?

I purchased a new vehicle which had an open recall and was not disclosed by the dealership and had not been repaired. Is that legal? Toyota says it is fine, NHTSA referred me to Toyota and my states AG can’t seem to help me.

As for legal that is not a forum type of answer . You don’t say what the recall is for and when it might be done. The dealer has to have the recall parts before they can do anything . Basically it is hard to know if you have a serious problem without more information.

Not actually asking for legal advice, I have read that selling a new car without repairing or disclosing a recall is against the law. The Problem: There’s a possibility the torque converter in the continuously variable automatic transmission could fail, which under certain conditions could result in a loss of motive power, increasing the risk of a crash.
There was a small scratch on the hood we asked to be repaired before taking possession, they required the car be purchased before they would do any work on the car. If it had not been for the scratch, we would never have known about the recall and taken the unsafe car on the road. The parts were here a week ago, we have contacted the dealer but the messages were never returned. I have contacted the NHTSA, Toyota, My AG’s office and can’t seem to get a straight answer. Appreciate the reply, trying to see if anyone has dealt with this, if they have any advice before I confront the dealer.

On a vehicle this new the number of people with this problem is probably very low. In your manual there are contact instructions to elevate your complaint to corporate. That would be the first thing to do.

Are you saying your service adviser or service department is refusing to schedule an appointment for the recall.

Not actually asking for legal advice, I have read that selling a new car without repairing or disclosing a recall is against the law.

Again, we cannot tell you that. We probably couldn’t tell you that even if we were lawyers, because such things usually vary based on what state you live in.

I can say that if a dealership sold me a car that had an open and as-yet-un-fixable recall, I’d be mad, and I would tell the dealership so, and explain in no uncertain terms that this was the last car I’d ever buy from them.

Unfortunately, you bought a Corolla, not a Bentley, so they’re unlikely to care all that much.

All that said, I research cars before I buy them. I’d have known about the recall before I signed the paperwork. That’s something you should get in the habit of doing too. If nothing else, it might be a bargaining chip – “Look, this thing’s under recall and Toyota doesn’t even know when it’s gonna get fixed. You can’t expect me to pay that much for this thing when I’m taking the risk that it’ll wreck before it gets fixed.”

There is a stop sale order on the Corolla Hatchbacks that are involved in the J07 recall.

It is against federal law to sell a new vehicle with an incomplete safety recall but it happens all the time. If the purchase occurred on or after March 21, 2019 you can report this to NHTSA and you might use the failure to disclose the incomplete recall to get the dealer to “unwind” the deal.

Or you could let the dealer perform the recall repair and keep the car.

That’s what I thought. I had one recall at the Buick dealership. Not safety. It was an exhaust system rattle of the Skyhawk. All new unsold cars and customers cars affected had to be repaired. I was the exhaust system mechanic. It was a financial bonus for me. A recall paid 100% flat rate labor. Warranty work paid 70%. Flat rate was .5 hours. Lot boys drove the cars in and out. No lift required. I could just crawl under the back of the car and remove and replace the defective exhaust system hanger in less than 10 minutes. I ended up doing over 50 of them. The rare occasion of actually beating flat rate. If Toyota is paying 100% labor they are still probably furnishing the parts leaving the dealerships with no profit.

I dunno but recall or not, legal or not, the loss of forward motion in a car is always a possibility that experienced drivers need to recognize and know what to do to avoid a crash as you say. Rarely should vehicle malfunctions result in a crash. New or old, malfunctions happen.

As far as getting the work done, you simply make an appointment with the service department. A few years ago the Acura lot was busting at the seams with used Acuras that they would not sell until the air bags were replaced. Limited stock available. More of a corporate policy and liability issue than legal.

Just got it squared away, never took possession, discussed it with Toyota Corp, ftc and nhtsa, they can’t sell it without disclosing mechanical issues. They were waiting on parts and were going to do the repairs but after I met with the GM they were happy to cut a check. It was a car my mother bought, I should have been more involved but she wanted to do it herself. Wasn’t her fault but we both learned a lesson. After reading more, rather than just losing forward motion it could completely seize up, like driving down the highway and throwing it in park. Just glad it’s taken care of, was just kinda ticked off when I posted this, maybe there is a way to remove it. Appreciate you and the others who responded with feedback. Thanks

It sounds like they were planning to perform the recall before delivering the vehicle, that is the correct process. They wouldn’t have a replacement transmission there if one was not ordered for that car.

The sales staff is required to check each vehicle for open recalls, if any apply the vehicle is sent to the service department for the repair.

It wasn’t disclosed prior, they hadn’t planned to repair it. There was a small scratch in the hood they agreed to repair. Had it not been for the scratch, she would have driven it home. They hadn’t ordered the parts at that point. They tried to tell me they had no notification from Toyota about there being a recall until it went to the service department for the hood. Honest mistakes can happen, I can understand that but that wasn’t the case. As you said, they have to confirm there is no recall. When the VIN was put in the system it would have been flagged with the recall. Technically, they are supposed to pull the car from the lot until the repairs are made. It all worked out but it could have been prevented. I am about to buy a new car, had they been honest, they may have gotten my business. Instead, they lost 2 deals. More frustrating than anything else. Thanks for the feedback, appreciate it.

Instead, they lost 2 deals.

It’s a shame your mother found the one dishonest salesman in the entire state.

No, there are plenty of them everywhere, these clowns just took it to a higher level, lol. Like I said, I should have been more involved but this was one of those things that she wanted to do on her own, prove to herself she could. Several things she wanted to do for herself after my dad died and did well, this one just had a little kink but it was resolved. I should have done more research on recalls but brand new Toyota, didn’t think about it.

I should have done more research on recalls but brand new Toyota, didn’t think about it.

I doubt if 1 person out of a thousand buying a new vehicle look up the recalls before buying. 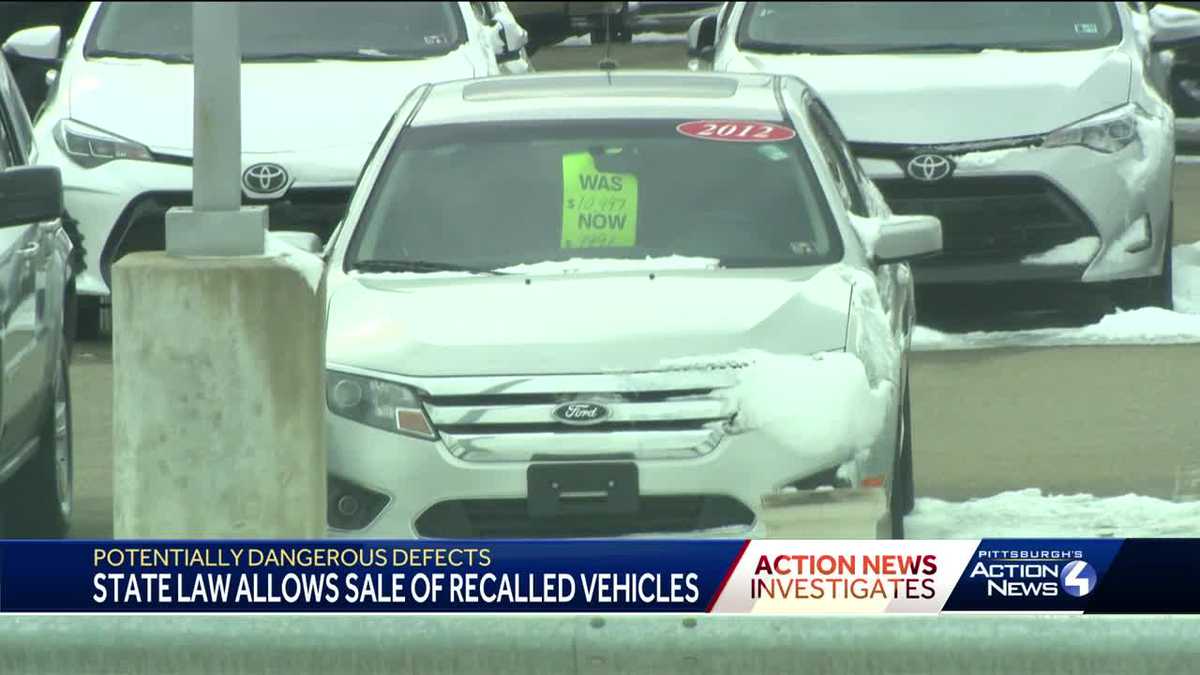 It’s a shame the dealership didn’t just admit to this problem when the OP pointed it out, and ask if the OP wanted to wait for the recall work to be done, or find a different car on the lot, or get a refund check and find a car elsewhere.

fyi: never tried it myself, but supposedly you can determine if there are any unrepaired safety recalls on a vehicle, based on its VIN.

Hi George, You are assuming the service department who is aware of Recalls and Technical Service Bulletins (TSBs) communicates with the sales department. Sales is Yea! we made a sale! That’s all they care about. I am fortunate to have a Kia service department that always checks for recalls and TSBs when I simply have my oil and filter changed.

I am fortunate to have a Kia service department that always checks for recalls and TSBs when I simply have my oil and filter changed.

Isn’t that the norm?
Going back as far as my '92 Accord, and continuing through my 3 Outbacks, the service department has always checked for recalls when I bring my car in for service.
If it isn’t the norm, it should be!

@vdcdriver Not the norm. My Corolla was subject to 2 recalls, the computer and the airbag, and the notices came directly from Toyota since we bought the car new. The selling dealer was sort of slow in admitting there actually was a recall. I had to push them! This dealer had my address on file and kept pestering me to come in for unneeded services.

Dealers make very little on warranty and recall work, so most don’t bother until the owner shows up. My wife’s Mazda had a recall on the rear gate struts. I read it in the paper and got the selling dealer to replace them. Again, if we had not pushed it they would not have notified us. This dealer also sends me endless emails about “necessary” service which I don’t need.