…regarding his “new” Jaguar: 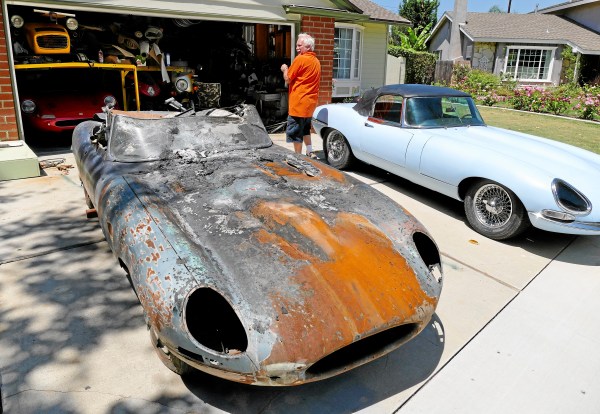 Malcolm Croxton couldn’t wait to get his hands on the 1962 E-Type Jaguar he had purchased for $50,000 from someone in Oklahoma.On Tuesday, the vintage Jag was finally delivered, albeit not i…

Well he won’t have to worry about removing the paint on it anyway. Wow, can’t imagine. All the wiring has to be gone, seats, etc. Needs a donor car if the sheet metal isn’t all warped. And I thought I was a glutton for punishment.

I’ll say one thing. The guy is about as upbeat as anyone could be considering the situation.

If it were me, I’d be down at the river sitting under a bridge and bawling like a baby while contemplating throwing myself in after finishing off a bottle of tequila.

Hey, I delivered the newspaper in which that article was written as a young boy!

He’s got the shell and chassis, drivetrain, and clearly can afford to throw some money at his project. I suppose he’s just happy that the car wasn’t crushed or burned beyond recognition.

Who was it who said people are just about as happy as they decide to be?

The owner is definitely a glas-half-full kinda guy. You have to admire that about him.

I’ve always thought of myself as a glass-half-full kind of guy. Recently someone described me as just being happy to have a glass. I suppose that’s true.

“Who was it who said people are just about as happy as they decide to be?”

IIRC, that was Abe Lincoln, who said a lot of very memorable things.

I agree that it is wonderful for this guy to be as excited as he is over his new acquisition.
I just question whether that level of joy is truly rational.
I guess that if you have enough money, it is fairly rational.

Maybe he should have been a little less exuberant and collected the full $50K from insurance, then bought the shell back for $500. Then he could have fixed it up at his leisure.

^
…IF it was actually insured.
The article states, “The company claims it has insurance, and its insurance agent claims the load was insured. And yet, the underwriter Croxton has spoken with claims it can find no evidence of any insurance policy.”

A little buffing and it will look like new!!!

I doubt it, because even though the car is damaged, it’s far more than a shell

Even in its present condition, this vehicle is worth far more . . . to certain individuals and companies . . . than a running $2000 grocery getter used car