Researching the next car might help I don’t know the availability, but my car sets off a dinger if the turn signal is still on after a while, It was a real surprise the first time the dinger went off after making one of those gentle turns that did not turn off the blinker

I once drove a 1962 Imperial. The turning signals were activated by a toggle switch on the dashboard. You flipped the switch from the center off position to the right for a right turn and flipped it to the left for a left turn. The signal didn’t cancel

And, speaking of directional signals, the signals on my brother’s '64 VW Beetle were… slow.
I cured that condition by removing the standard VW directional flasher, and replacing it with the flasher unit for a '49 Chrysler. I picked-up that tip from either Popular Science or Popular Mechanics (I subscribed to both in those days), and while my brother was initially skeptical, he was very pleased with the result.

I learned to drive in 1972. The driving school I was sent to used Plymouth Valiants for their training cars… Very straightforward car. Anyway, if I recall correctly, there was an outside turn indicator mounted on the front part of the fenders, easily seen by the driver. This was in addition to the indicators on the dash.

You recall correctly all chrysler product’s from the mid 60s to mid 70s was built that way I realy liked it that way.

there was an outside turn indicator mounted on the front part of the fenders, easily seen by the driver.

I also like this design. If the mirror LEDs that signal a turn on my current car only wrapped around the rear edge of the mirror just a bit (one more LED’s worth), I’d be able to see mine from the driver’s seat too. There have been many good ideas over the years that were discontinued in the interest of styling. Or cost.

My HS buddy in the '60s had a Valiant with a push button shifter, There were five push buttons lined up on the dash, and you simply pushed the one that put you in the position you wanted (P, R, N, D, L if I remember correctly). Plymouth tried putting the buttons in the center of the steering wheel too, but the technology of the time wasn’t up to the task. It was unreliable. But with today’s technology I think a pushbutton tranny would be a great idea. No more console space unnecessarily used up. No more shifter between a guy and his girl. Imagine the possibilities.

But with today’s technology I think a pushbutton tranny would be a great idea. No more console space unnecessarily used up. No more shifter between a guy and his girl. Imagine the possibilities.

When my wife and I were car shopping last fall I absolutely loved the dash-mounted shift buttons on the new Lincolns. Fantastic execution, clean and simple and frees up console space. The car we bought has a shift lever in the console, which I find stupid because it’s all electronic anyway. No more shift cable or linkage.

If all else fails, here’s a 12 volt buzzer for less than $3. You’d have to get an auto electric shop to hook it into your turn signal wiring. You might need 2 of them, one for right, and one for left.

When I started driving, many cars weren’t equipped with turn signals. We learned to use hand signals. When you wanted to signal a left turn, a right turn, or a stop, you rolled down the driver’s side window and gave the hand signal. Keep in mind that very few cars had power windows, so you had to make some effort to signal a turn. There was s suggestion in Popular Science that you should apply a strip of reflective tape to an old glove and wear the glove at night for signaling a turn. Even the first school bus I rode didn’t have turn signals.

The technology is mature and reliable

If you are referring to turn signal indicators mounted on top of the fenders, I can tell you that you are wrong about “all” Chrysler products from the mid-60s to mid-70s having that feature. My father’s '63 Plymouth did not have them, nor did my brother’s '67 Plymouth, nor my '71 Charger.

It is very possible that this feature was an extra-cost option, but–just like with other options–that means that it wouldn’t appear on “all” of the Chrysler products of that era.

Close: Powerflite - R,N,D,L
Torqueflite- R,N,D,2,1
Actually spelled out or abbreviated on the buttons.
Park had a lever to engage.

The vehicle with the push buttons in the steering wheel was Edsel,
Great styling but gimmicks and rush to production lead to quality control problems.

Picture Plymouth Dash, lever to the left of the instrument pod engaged the parking pawl. Lever to the right heat control. 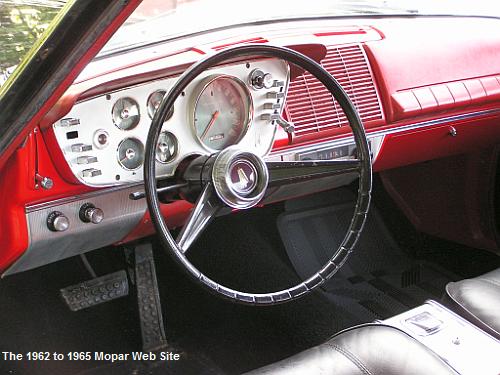 When my wife and I were car shopping last fall I absolutely loved the dash-mounted shift buttons on the new Lincolns.

Cool. I was unaware that anybody had started using them again. As already mentioned, the shifting is all controlled by the TCM these days anyway. Shifters are an anachronism.

As already mentioned, the shifting is all controlled by the TCM these days anyway. Shifters are an anachronism.

Funny you mention that. In the shop today I’m waiting for parts to fix the clutch mechanism on a 2009 Smart Fortwo. This has an automatically shifted manual transmission. Instead of a slave cylinder or clutch cable, there is an electronic actuator mounted at the bell housing to operate the clutch fork. There is no clutch pedal. Instead of shifter linkage or cable there is an electronic actuator mounted to the top of the transmission that selects the appropriate gear. Just put the car in R or D and go and the car clutches and shifts for you. How’s that for electronic control?

How’s that for electronic control?

I wonder why they did it that way instead of using a conventional automatic?
Now wonder they’re so expensive… for an urban econobox.

for an urban econobox.

The economy part of that went out the window with this repair. It needs a new clutch actuator, that will be close to $900. And once I get that part installed and relearned, let’s hope that when the actuator stuck partially engaged it didn’t fry the clutch. Clutch replacement will be close to $1600.

You may be right I was basing my reply on 65 to 71 dodges & plymouth’s that I owned I did have a 64 but can not remember for sure if it had them or not. It may well been an option as the 67 that I had did have them & also my bil’s 69 charger had them every vehicle that I ever had was used so I have know idea what option’s were avaible for them I have never bought a new car or tkuck’

Now wonder they’re so expensive… for an urban econobox.

Me Nitpicking just for no reason. You are correct, Smart cars were expensive. Econobox, not so much. Required premium fuel and did not really get the miles per gallon people expected. Will admit the used ones in my area have attractive prices but it is also an orphan vehicle now.