If you can't steal the whole car

…steal its face.
This just happened down the block from me: 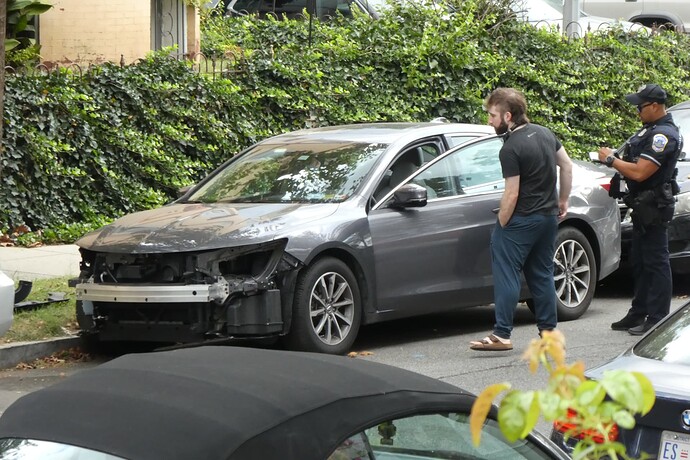 maybe they plan on taking it a piece at a time.

About 30 years ago a work friend of my wife went to a wedding in Pittsburgh. Her T-tops were stolen. It was late autumn and since she needed them to drive back to Baltimore, she bought them locally. She always wondered if she bought her own T-tops.

On the plus side, good chance to see what’s behind all that paraphernalia they put on the leading edges of cars these days. Is that some sort of tank in front of the driver’s side tire? I wonder what it’s for?

maybe they plan on taking it a piece at a time.

That would be the Johnny Cash way.

I bet the thief had the same car with damaged parts and he knew exactly where every nut and bolt was.

Thief may have needed car repaired in order to drive to work and make income to feed family, and felt they had no other way to do that. Or thief could have not good reason for doing it, simply been trying to avoid paying for replacement parts. It’s also possible thief didn’t need the parts themselves, instead selling for cash to a middle-man who washes the transaction, making it appear like legitimate parts from a car-parts recycler business. In other words everybody in the transaction is crooked. Calif gov’t recently signed a new law requiring a lot of paperwork to document that middle-men’s used cats are not stolen. 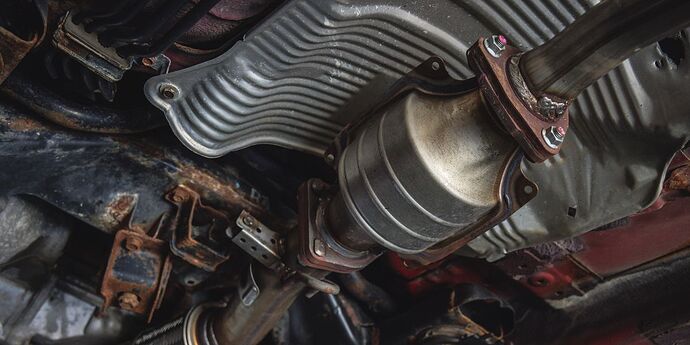 The state will require strict records of any transactions involving the valuable car parts; it's one way to approach skyrocketing theft rates.

Is that some sort of tank in front of the driver’s side tire? I wonder what it’s for?

On the Volvo 850 it is the EVAP charcoal canister.

I wonder if they got the hood open to remove the headlights and grille?

Is that some sort of tank in front of the driver’s side tire? I wonder what it’s for?

It might be the windshield washer fluid reservoir, because most of the modern ones are stashed behind the bumper assembly. However, I’ve never seen one that was black, so perhaps it has some other purpose.

What model car is it? It’s hard to tell without the front fascia. I read today about less expensive Hyundai and Kia models not having robust security system, leading to higher theft rates than other brands.

What model car is it? It’s hard to tell without the front fascia.

I took a closer look this morning.
It’s an Acura TLX.
The black box on the driver side is apparently an air intake muffler.
The washer reservoir is on the other side.
The rear passenger side window is broken out.
It’s not one of the familiar-to-me neighborhood cars.

On the Volvo 850 it is the EVAP charcoal canister.

The vehicle in the picture is not a Volvo 850 so thanks for the usless info.

The black box on the driver side is apparently an air intake muffler.

??? … Intake air flow never caused any noise problems in my cars. My Corolla has intake air sort-of containers, but that’s after the air filter, for supplying an immediate burst of already cleaned air if the gas pedal is hit full bore. hmmm … Wondering if on this car it’s needed b/c this engine is a turbo with turbo’s associated high velocity/volume air intake? Otherwise the incoming air flow might produce a whistling sound.

Just a second look but it appears there is some fender damage so maybe the owner was taking the damaged parts off to begin repair. The police could be there for anything like parking but I dunno.

Speed/red light cameras in the area?

The red light and speed cameras here take photos of the back of cars.

The red light and speed cameras here take photos of the back of cars.

A lot do, plenty of 1 plate only states and people who just lay the front plate on the dashboard.

I saw car for sale with 1 new plate on dash and rear and old plate on front. Or was it vice versa?