I am involved with a project and I have to identify 40 hubcaps from 1930’s to 1970ish. I have about 10 I can not figure out what make or year they came from. I have pictures. Does any body want to test there knowledge of hubcaps?

If you post the pictures, I am sure that some of us would like to try to identify them.

Sorry it will only let me attach 3 at a time

Last two. I appreciate any info you can give me.

That is tough! I’m thinking 1 is a 70s era chevy, but that is a tough project.
Maybe this guy would be nice enough to help you.
http://www.onlyoriginalhubcaps.com/

I can’t quite tell how far out it sticks, but #1 looks a lot like the hubcaps on my '64 Buick LeSabre, but minus the emblem. That would make me definitely think 60’s vintage GM product. Given the lack of emblem, probably a bare-bones Chevy.

The second to the last one looks like what’s on my friend’s 80-something Caravan, but by that point Chrysler may have only had a couple of hupcap designs, so it could be from anything.

Thank you for your help!

#8 looks awfully tasteful for being a Cadillac hubcap. I was thinking it might have been from one of the years where Ford had their silly coat-of-arms thing.

There is a subculture of hubcap collectors that have websites and reference catalogs. Have you tried Googling for “hubcap reference photo catalogs” or something like that?

Ah, didn’t know about that. Coat of arms, huh?

Is anyone able to identify this hubcap? It is on my 1999 Lincoln Continental Town Car, Signature Series. Thank you! 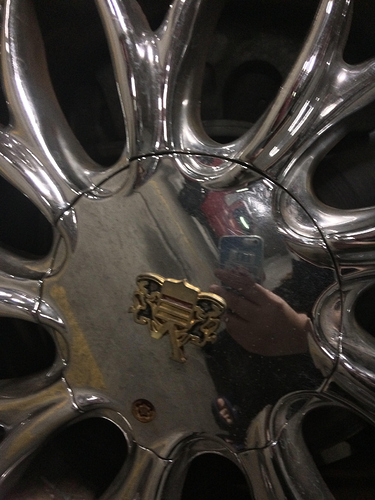 The logo sort of looks like the front grill of an antique car, but I don’t recognize it.

If nobody here knows, you might can get Google to match it for you. Take a close-up of the logo, store that as a jpg on your computer, then surf to the Google image website. You’ll see a little camera icon at the top. Click on that and you can upload your jpg to Google, who will compare it to all of their stored photos for a match. I tried it myself using the photo above, but didn’t get any car related matches. But I didn’t have a close up of just the logo to work with.