How Much to Repair Dent?

Just a really quick question, I’m wondering how much you guys think it would cost to repair this dent? I have the opportunity to buy a new trunk for $300, but I really like the one that I have due to the spoiler and emblems: 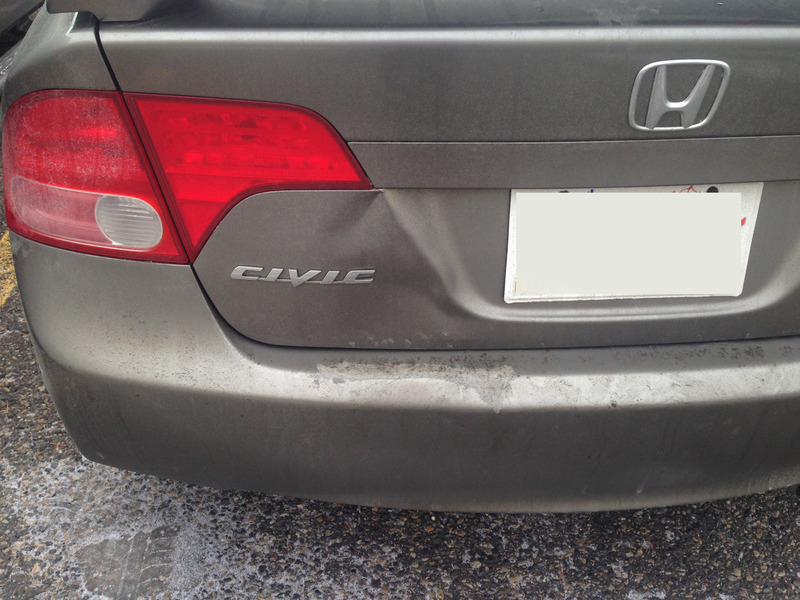 Thank you for your two-cents!

You link doesn’t show unless you have a google drive account.

I see that now

The only estimate that will mean anything is from a body shop .

They probably won’t attempt to straighten and you don’t want bondo…replace the truck lid if you want it in showroom condition.
They will transfer the wing and emblems.
Otherwise you could opt to just leave it.

If that $300 lid is already painted with the proper paint code, you’re crazy not to scoop it up. The spoiler and other details can easily be transferred.

I agree with Ken. No body shop in its right mind is going to try to repair that. They’ll just spray a new boot lid, transfer the paraphernalia, and mount the new lid.

Try a paintless dent repair, $150 max my guess, and yes I have had very satisfactory work none by that type of service!

Barkydog wrote:
Try a paintless dent repair, $150 max my guess, and yes I have had very satisfactory work none by that type of service!

I suspect that crease at the top is too sharp for PDR to fix perfectly. Maybe I’m wrong.

Sorry, I don’t think so, not for this. I’d eat my trunk lid if that could be magically, paintlessly repaired for 150 bucks, or at any price, for that matter.

It even appears that the paint is broken.

Get an estimate, sure the aluminum ladder blew over in the wind, creased the hood, scarred the plastic headlight lens, They buffed out the lens, did a good job for $100, sure slight blemish in paint in my case but i do not see it in that dent. It is almost like recommending someone see a chiropractor, No I am not going to a witch doctor, I want surgery, 5 people at work, 2 went to my chiropractor, still working, 3 went straight to surgery and are now on disability, Do not understand the dismissal of paintless dent repair or chiropractors as a viable option.

Get an estimate and give them a chance sincerely!

Yeah I don’t think paintless is going to work on that one due to the creases. I had a soft ball sized bump on the fender done last summer and it cost me $150 for the paintless, but there was no crease, no scratch, and no stretch, just a matter of working it back smooth. Looked like some kids banged a soccer ball or something into it. But yeah, just have a shop look and give an estimate.

How did this turn into a discussion about chiropractors? I see no relationship between them and paintless dent repair.

Paintless dent removal might be able to improve it but because of the creases it wouldn’t be perfect. The real problem is there would be little, if any access from behind because there is probably an inner panel behind the dent.

I think the point was that traditional body work such as bumping it out, grinding, filling, and painting is like surgery but the PDR guys are more like a non-invasive repair. You have to pick the appropriate remedy though. A chiropractor is not going to be able to pin a leg but maybe straighten a spine. I’ve used PDR twice for hail and the soccer ball and they did a great job. But when I hit a deer, it was conventional body work. The PDR guys work out of the body shop though so they can pick either one depending. With the creases though, the paint breaks, and limited access though, don’t think its a PDR job but surgery or replacement.

I had a crease in the hood, from a blown over aluminum extension ladder, and I was happy with the repair.

“I had a crease in the hood, from a blown over aluminum extension ladder, and I was happy with the repair.”

That’s Pretty Darn Good Work! A hood especially (You can see it from inside the car!), and any horizontal surfaces are tough because reflection really shows the imperfections. You can usually get away with more on a vertical surface. Color matters. Some are more forgiving than others.

I managed a body shop for a couple of years (unfortunately). What it comes down to usually with body work isn’t whether a repair can be done a certain way or not, but the cost involved from one method or another.

Labor is becoming an expensive commodity. That trunk lid (deck lid) would require enough work, either from conventional body repair or PDR that a cheaper route would probably be replacement, especially if a decent used part was available.

I own a car that had PDR (not perfect in this case, but remember I managed a body shop). It was a door ding and light was reflected down, not up to the eye.

I’m not opposed to PDR because I hate to alter the original paint job, but sometimes, for certain repairs, it’s not practical.

I’d listen to a trusted body shop on this one.

Perfect timing ? on a dent question. thursday my daughter becked the 08 Exedition ( the loooong one ) into a wall.
Left rear quarter has damage.
Squashed the bumper cover up into the corner and cracked the tail light.
BUT it also creased the sheet metal a bit.
Not enough to break either glass , rear gate or quarter.
The tail lamp is taped in place and red tape covers two small missing chunks to be legal. It’s pushed forward an inch, a new one won’t quite mount right.
The rear gate left corner is pushed in just a tad and the gate works fine.
full price estimate using new parts…$ 5670.59 !

I’m looking into straightening-ish the sheet metal and recycled other parts.
But the estimate of showroom new astounded me…and I work here !

ken: I long for the old (Jimmy Carter) days where a car had to withstand a low speed (5 mph? 10 mph?) collision without significant damage.

Me too. That was quite an entertaining event when that rabbit savagely attacked him when he was boating! Plus, a lot of folks miss 18% mortgage interest rates.
:neutral:
CSA

Jimmy Carter? Try Ike. I remember on my 59 Pontiac the corner of the rear bumper was sticking out an inch or two from before I got it. I tried everything trying to get the bumper back and even tried backing it into a tree. Nothing would move the thing. Must have been close to a quarter inch of solid spring steel.