I’m not sure what kind of vehicle this is, but this looks like the kind of redneck repair I might consider if I was desperate. 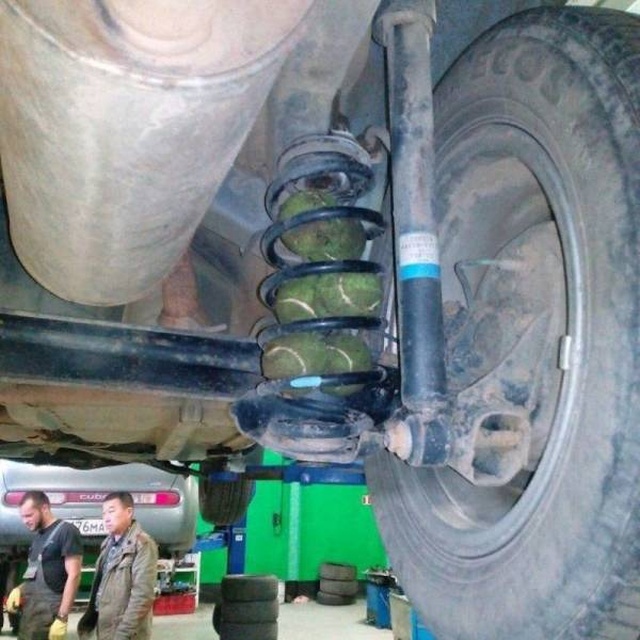 It’s a Wilson, of course.

Wilson Automobile Manufacturing Company was a manufacturer of automobiles in Wilson, New York between 1903 and 1905. Their automobile model was sold as the Niagara. The 1904 Niagara was a runabout model. It could seat 2 or 4 passengers and sold for US$850. The vertically mounted water-cooled single-cylinder engine, situated at the rear of the car, produced 5 hp (3.7 kW). A 2-speed sliding transmission was fitted. The steel and wood-framed car weighed 1100 lb (499 kg). Full elliptic rear su...

I love it. And you can adjust the damping by adding or subtracting tennis balls

can adjust the damping by adding or subtracting tennis balls

Adjusts the spring rate, too. I suspect the suspect needed to carry more load than the car was capable.

On the Lotus Elise a tennis ball helps you put the air box back together after changing the filter, Jason Camissa who you might have read his articles in various car magazines over the years keeps one in his toolbox for working on his Lotus Elise.

It is the angle of the airbox on the fireall that kills the attempt to keep the box hinges together. This is why the two person approach helps. I do not have a wife that will get her hands dirty like some of you. I found that if you jam a tee-ball or wiffle ball in between the airbox lid and the firewall until the back (right) hinges hook up first and then work on getting the clamps together it makes life much easier.

Haha… I like it. Hey at least a real steel spring was used here. Not like the “Elastomeric” cone suspension of the Mini… I never forgot that name

I’ll keep that in mind. I’ve got a whole bag full of them just gathering dust. From the background though, it may be in an area of the world where parts are not very available and they improvise with what they have. Then again if they have tennis, they ought to have a country club and a parts store.

I like it. Reminds me of the hack repair of the heater core on a 1994 k1500 I bought for scrap value. Someone had replaced the heater core, but in the process, had broken the attachment point on the hvac plenum where the heater core mounts. Instead of coming up with a hack or workaround that would even be considered by a shade tree like me, they crushed a beer can on one side at the perfect angle to wedge the heater core into the correct position once the plenum access panel was closed. I’m still fascinated by the attention to crush angle detail after, no doubt, they consumed at least one of those cheap light beers. I wish I had a picture…but I assume it kept drunk people warm. So bonus points for humanitarianism.

You just reminded me of that guy in Northern Minnesota. The car was a total rust bucket and he had mounted a gas can on it because of a leaky tank. A few other modifications that I can’t remember. I have no idea where a picture is but the patrol wrote the guy up. I thought it was a little unfair since he was just trying to get by and in that area there is hardly anyone else around anyway. People do what they have to do and get creative.

You used to see a window AC unit mounted in a van or truck back window every once in awhile. You don’t see that much anymore. I bet that was some cold ac, if they ever got it working.

Welded a plate to a rusted out frame to hold the shock, does that count?

On my son in laws 77 Oldsmobile, the trans cooler failed inside the radiator. The A/C compressor was shot so we routed the trans fluid through the condenser. When my 61 Dodge Phoenix was old and I was out of work, I put an outside faucet through the dash and used it for a heater control valve.

I used a blown bicycle inner tube as a clutch return spring on a $150 Plymouth Duster.

On an Easter morning were were having 11 people for dinner that day and the chrome P -trap under the kitchen sink let go. I had a 66 Valiant radiator in the rafters of my garage with the hoses still attached. One of them replaced the P-trap perfectly and lasted for many years until I replaced tha drain pipes with plastic.

Make do or do without.

Who knows, all car manufacturers might start using that elasto-metallic technology for their coil spring suspensions now that its in the public domain … lol … I wonder if it would make garage door springs less noisy?

that’s a good idea in a pinch If I remember JC Whitney and Co used to sell these air like inserts that you could place in the spring then blow it up with the-amount of air you needed to adjust your ride.

I installed a pair of those in a '59 Olds years ago when I still had hair.

Ill bet they out lasted the car