This resurfaced at the cabins after many years MIA. So glad to see it. Supposedly the numbered holes are for the engine mechanic to keep track of the valve positions in old flathead engine overhaul. Got any fun stuff 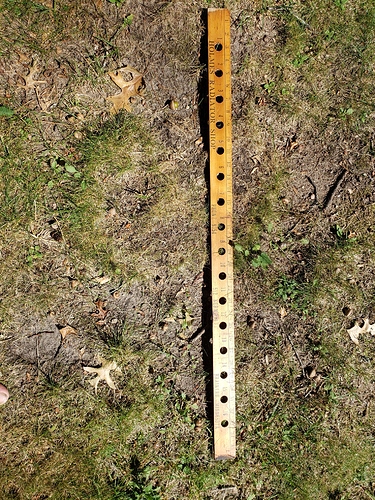 I made something similar with plywood to use in V8 engine rebuilds. Nails for the springs and rockers, drilled holes for the pushrods, slots for the lifters and the cam right in the middle. I tossed it a few years ago so no pictures.

Ford V8 flat heads required that the valves be milled to allow the correct clearance and if mixed after machining the tedious job test fitting and matching them for location was a real pain. Adjustable lifter became available and were popular I heard. The only mechanic I knew who worked on those engines insisted on keeping them back like the factory had them and used a piece of cardboard with FRONT marked on one end.

I’ve got a homemade tool I rigged up once to use when adjusting valves on the old SAAB 900s. Adjusting valves was a PITA as the valve shims were located under the bucket; not between the bucket and cam lobe.

There was special tool which held a dial indicator and all valves had to be measured and written down.
The cam was then removed which was a chore. The cam chain guide had to be retracted; no easy task when it’s buried a foot down in the case and there’s only an inch of space and darkness to worth with.
The cam sprocket had to removed and bolted to a metal tab to hold it in place while the cam was removed. There’s much more to the process…
If the guide slipped; ouch. Headlights, grill, hood, radiator, engine and transmission had to come out…

I made the guide tool out of a Craftsman 13 MM combination wrench and a VW Beetle transmission shift shaft with several bends. Odd but it worked even though the job was still aggravating. I’ll see if I can get a pic of that thing and post it.