Gimmicks/features that you actually liked

With a lot of you guys and gals here having owned several vehicles throughout your lifetimes, has there ever been an option you thought was a bit of a weird gimmick but turned out to be something you never knew you needed until you bought a car that had it and you tried it out? Maybe some that went away and you’d like to see come back?

For my most recent option I thought was some odd gimmick was a steering wheel heater. I first seen this as an option when building a car on BMW’s website and thought it sounded kinda dumb, especially since it added like $1000 to the price of the car.
My Bolt has this as a standard feature on it and it will come on automatically if it’s cold enough- same with the heated driver’s seat. Since I let the car warm up a few minutes to clear any frost/ice on the windshield, the steering wheel is nice and warm when I finally get in the car.

My all-time favorite “gimmick” was the storage drawer, located under the front passenger seat in the Chrysler minivans. An optional hinged storage bin was also available, located at the bottom of the center console. Both of these offered storage for CDs, audio cassettes, and so on. Most cars today are short on storage space for personal effects such as music CDs, etc. And of course, they don’t give you an ash tray anymore, either (not that I need one for its intended purpose, but great for storing coins, etc).

Maybe I’ll think of something but the Crt screen on my riviera allowed me to write messages or reminders with the date and time for them to display. I used it for things like happy birthday or welcome to Florida when I could time it right.

A fold down mid-gate. On my Chevy Avalanche. The truck’s rear seats fold flat, the mid-gate can be folded down to open an 8 ft cargo space. The rear window can be removed and stored to open the entire rear.

Swiss Army knife of SUVs. I though it silly until I bought one… and then another. Sorry they aren’t making them anymore.

My all-time favorite “gimmick” was the storage drawer, located under the front passenger seat in the Chrysler minivans.

Me, too. I liked it so much I cut a cardboard box to fill the similar space under the driver’s seat. Reinforced its top edge with package sealing tape so it holds up well to being pulled out and pushed back.

Another Chrysler minivan gimmick I like: the mesh net between the front seats.

A fold down mid-gate. On my Chevy Avalanche. The truck’s rear seats fold flat, the mid-gate can be folded down to open an 8 ft cargo space. The rear window can be removed and stored to open the entire rear.

Swiss Army knife of SUVs. I though it silly until I bought one… and then another. Sorry they aren’t making them anymore.

The new electric Silverado is said to have that midgate option, and with the “multi-flex” tailgate down, can have up to 11 feet of room in the bed. I don’t want to even guess what replacement tires for the optional 24" rims will cost, and hopefully I won’t have to learn, either.

I had heard GM resurrected the mid-gate. Not about to spend $80K to buy a vehicle that doesn’t do as much as my 18 year, 150K truck does.

Would not consider GM for any purchase, in any event.

My all-time favorite “gimmick” was the storage drawer, located under the front passenger seat in the Chrysler minivans.

Our 2003 Olds Silhouette had that too. I didn’t think of it much when we bought it. We did use it though.

Mrs JT thought the power rear lift gate was ridiculous when we were looking for a van in 2019. I told her it might not be an issue when she was 61, but she would eventually appreciate it as she aged. We always use the power feature and now she loves it.

One persons gimmicks ( or Gadgets as a local Luddite calls them ) is another persons desired option .

1970 Coupe DeVille. When you opened the door, the latch that kept the seat back in place automatically released. No need to reach for the lever or button that allows you to fold the seat back forward to allow access to the back seat. Maybe not a gimmick so much as a convenience feature, but appreciated nonetheless.

My 68 cougar had a pedal on the floor, when actuated washed and wipered the windshield. I used to tell people it was voice activated. Wash window, then hit the pedal!

In my '88 Taurus Wagon you could turn the dome lights on or off by pressing the light itself. When I replaced that with a '97 that feature was gone.

Rather than a gimmick, I think that the dual sun visors on the driver’s side of my '86 Taurus were really a great idea. When driving on curving roads in very bright sunlight, there was no need to keep swinging your visor from front, to the side, back to the front, and so on. Just lower the visor in front of you, and then swing the second one to the side. None of my other cars ever had this very handy feature.

This little knob thing on the distributor in my (long gone) 1975 Corolla, 2-TC engine. You could add or subtract how much vacuum advance , I think it was +/- 4* for the octane fuel you have. It would help stop knocking if you got poor fuel. 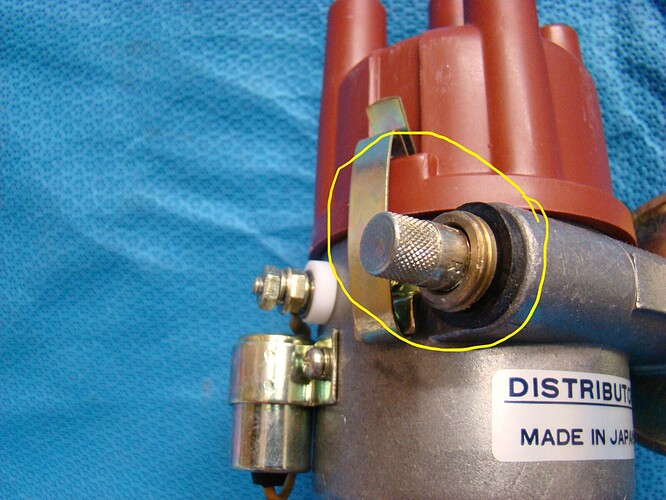 Not really a gimmick-liking sort of person I guess, but I like my early 90’s Corolla’s cool-air ventilation system. Forces plenty of fresh air through the passenger compartment, works well in this climate even w/no AC. My truck (no AC) has similar ventilation feature, but on it the air seems to be semi-heated, and not nearly the volume -flow. Have to use the wing-windows on the truck for passenger compartment cooling function, much noisier, wind blows stuff around, and doesn’t work if not moving.

My parents had a 1964 Cadillac Series 62 hardtop. It had a button on the floor on the left where a clutch might be located. It was a Station Seeker for the radio. I loved that button. Press it and the radio went to the next radio station powerful enough to latch onto the signal.

How about curb feelers they saved a few tires for me.

Certain full size Chryslers had swivel out drivers seats in 1959 and 1960.