Ford C4 Won't Shift from 1st to 2nd when Cold

My Ford truck’s C4 auto transmission has developed a symptom recently, on a cold start shifting from N from D, it goes into 1st as usual, but stays in first for a couple of blocks even up to 30 mph, before finally shifting into 2nd and 3rd. After it shifts the first time, it performs flawlessly after that. No problem at all with upshifts or downshifts. A couple of other clues: (1) When this is happening, I can move the shift lever to “2”, and it shifts from first into second immediately. One other clue, when this is happening, I can usually get it to shift from first to second if I get it up to 20 mph or so in first, then let up on the gas completely for 5-10 seconds, then when I press on the gas to go back to normal speed it will usually shift from first to second.

This all started when the city was repaving the road last summer. I had to park the truck off the road for a couple of weeks, and the construction crew building a new house on a nearby lot allowed me to park it on a hill of dirt they had piled up next to the house they were building. So it was parked at a 30 degrees angle for two weeks. That steep parking angle allowed some transmission fluid to drain out. I refilled with fresh Type F, but within a few weeks I started to notice this tendency to stay in 1st gear longer than normal, but only when the transmission is cold.

Any ideas? I’m suspecting the vacuum modulator b/c of the accelerator pedal involvement. The VM design on this truck is a two porter, one is connected to manifold vacuum, and the other to a vacuum source above the throttle plates.

Pull the vacuum modulator when car is level and if fluid comes out so you have to avoid getting it on you, drain the excess out of the valve and reinstall it. Too much fluid can sometimes cause that delay.

You can always change the modulator if there is fluid that drains from the vacuum port but you might get lucky. If the transmission isn’t over serviced it may have to be rebuilt.

This may not help you but I had a 71 Maverick with a C4 that had this exact problem when it was new. Once I manually shifted it, it was fine after that. I took it in under warranty several times before I finally gave up. The dealer claimed they couldn’t duplicate the problem but I doubt they actually test drove it because it happened every single time I drove it first thing in the morning when cold. I left it with the dealer overnight each time. Eventually it cleared up on its own. Whatever was hanging up finally wore in.

Back in the 60s and 70s that seemed to be normal when the temperature was below freezing. All automatics were sluggish shifting on a cold morning and Fords especially.

Going from memory from a million years ago with my '71 Maverick:

But about that Type F fluid. I thought that C-4s used Dexron.

What year is the truck? I seem to recall a different trans fluid in older trucks.

You also have a governor on the output shaft of the transmission that might be sticking when cold.

You’re going to want to add this to the transmission fluid and cross your fingers. 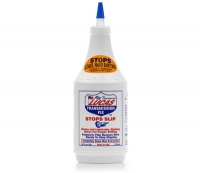 Lucas Transmission Fix is a non-solvent formula that stops slip, hesitation and rough shifting in worn transmissions and completely eliminates most se...

Because if this doesn’t work? Start looking for a transmission.

Good info from all. Thanks. It’s good to know others have experienced this same problem. I’ve had to do a rebuild one time before, but the symptom for that was different, I’d shift from N to D and nothing would happen, it would stay in N. Plus even when warm there was slipping & delayed shifting. I get none of that now, just the stubbornness to remain in first when cold. I think I’ll try a routine “drop the pan , clean the filter, and refill service” first. Due for that anyway. I’ll clean the spring and check valve port then too. And I’ll take a look at my C4 tear-down and rebuild book to see if its possible to test anything w/the output shaft governor without removing the valve body.

It does take Type F fluid according to the owner’s manual. That’s what I’ve always used. The fluid does not look or smell burned at all, clean as a whistle. Not surprising as I only use the truck to put-put about the neighborhood & town, haul a little firewood when somebody’s tree falls down, drive for parts for the Corolla when it is on jack-stands, etc and even all that is at most a couple times a week thing.

I’ll remove the vacuum modulator for a look-see and test the two VM vacuum diaphragms at the same time. If the above doesn’t do the trick I’ll try adding some of the Lucas de-gunking product Tester mentions.

What year is the truck? I

I saw frost a few mornings in January of 1969 in San Diego.

Although SJ is near sea level, there’s some pretty tall mountains, nearly 5,000 feet tall, within 30 miles or so of downtown SJ, so it’s not uncommon to wake up and see snow on those peaks during the winter.

I seem to remember people adjusting bands on these transmissions, everything seems to come up mustang c4, Never a problem on my 72 when I traded it in in 89, rust killed it.

Good point. I was wondering if it might be the 1st gear band. But I’m not exactly sure what the band adjustment does. I’d have guess to prevent slipping during a shift, not b/c it won’t shift at all. Bill Cosby did a bit on transmission band adjustments and their effect back in the 1960’s. Maybe I’ll have to do some research

You had a 72 Mustang @Barkydog ? Cool. Last summer I went to a local classic car show and they had a 1964 1/2 in exactly the same trim line as the first one I saw back then. A local physician took a test drive in the first one to hit our town, and gave a bunch of us kids a ride, still remember that event to this day. The Mustang at the car show was the exact same color, was a convertible, and had the same color of seats, everything.

No I had a 68 Cougar xr7, 72 was an f100, I was saying looking at c4 trans band adjustment bought up a lot of mustang links, it was not clear in my response, sorry.

Ok, I see what you mean.

I think I got this one solved. A proper transmission service and a little dose of higher speed driving is all it needed. I hauled a load of firewood today, the truck shifted perfectly from a cold start. Thanks to all for the help

Back in the good ole days a tune up for some vehicles included a drive down an open road to blow the soot out @George_San_Jose1. And like we advise posters here with transmission problem getting it serviced properly might be all that’s needed. I’ll advise going one step further though. Get a can of flushing agent for the transmission cooler. If the cooler ever accumulates enough trash to even partially restrict it the results are catastrophic.