One of the local County Fairs is going to have a Demolition Derby.

Completely normal behavior for a county fair in the summer.

I used to go to them back in the 70s and once in the 90s. I wonder what has changed about them?

Have not been to one in a while, figure 8 racecourse was popular way back when.

I wonder what has changed about them?

Very little from what I can see. Folks are digging the largest, heaviest, ram-tastic cars out of the junkyards and pressing them into service. Getting harder to find a 1974 Behemoth Wagon in the junkyards anymore but that is part of the fun!

I used to go to them back in the 70s and once in the 90s. I wonder what has changed about them?

If you go to it you will have your answer .

There is a company that sets them up around the country “Tour of Destruction” Went last year, great fun. School bus races, figure 8, trailer races, and more. No I’m not affiliated with them, and once was enough.

The last one I saw here at the county fair some years ago was actually kind of boring. I guess they were worried so much that someone would get hurt that they shrunk the demolition area down to near nothing.
I don’t think any of the cars ever hit 20 MPH due to traffic congestion.

Yeah they are great fun. Especially after the pit dries out a little after being watered and the guys (girls) can get better traction. Wearing ear plugs is mandatory. This year there was no demolition derby but instead were having a rodeo and lawn mower races. Sorry I’m not a horse fan and I think my stock lawn mower could out run some of those folks. In other words boring. The next county always has a demo derby though and not as many horse lovers so I might still take one in this year. Did I mention WEAR EAR PLUGS? Even if you can’t hear anymore like me.

Yeah, a lot of fun. Ours would do the 8, then have a free-for-all in the open field. They’d also have a backwards race sometimes. I see some are using small cars in special events… even lawn mowers.

I still remember the old ad for some car (maybe a Mini or Rabbit?) years ago. All these huge, snarling, smoking beast cars, and this shiny new midget car.

I don’t think I’ve ever seen one in person, but the ones I used to watch on Sat morning tv were pretty fun. For the first 15 minutes anyway. After a while it begins to get a little tedious. The San Francisco Giants baseball time has a feeder team here in San Jose. That’s a team that are good baseball players, salaried, but not quite ready for the big show yet. But still pretty good baseball, so I go to those games occasionally. Baseball has a lot of breaks in the action, and one of the most popular break-segments is they drive an old flatbed truck out on the field and two members of the audience throw baseball at its headlights, whoever knocks out the lights wins … lol … seems silly, but it is pretty fun to watch and must tickle the same brain area as the demolition derby.

It helps when you get to work on one. My friend worked for a guy who scrapped car parts (radiators, batteries, and other parts that brought in good price/pound). He occasionally had a full car… some of which were converted. But that was back in the very early 70’s before the track was forced to close.

People bought land near the track, cheap b/c of the noise, then complained about the noise.

Tillamook oregon does things a little differently at their fair, these races have been going on since 1925

The races are run every August during, and as a feature of, the Tillamook County Fair. Drivers use stripped Model T Fords with stock mechanicals. Five cars are lined up with the engines off at the start line of the Averill Arena horse racing track. Drivers stand next to the grandstands. When the starter pistol fires, the drivers run to the opposite side of the front straight, grab a live 20-pound pig from a bin, then must hand-crank their car and drive it one lap. They then stop, kill the engine, get a different pig, and race another lap. The first driver to complete three laps in this manner without losing their pig is the winner.
The race was first run in 1925.

The race was first run in 1925. The official story is that two local farmers were chasing a runaway pig in their Model Ts and were having so much fun, they decided it should be a race at the next county fair. The Pig-N-Ford Races have been run every year since 1925. Drivers belong to the Tillamook County Model T Pig-N-Ford Association, and membership is often a lifelong affair. Cars and memberships are often passed down through families or sold to close friends. Some of the cars that first ran in 1925 are still on the track today.

Well that sure beats lawn mower races, but man having to do everything with one hand after holding the pig.

Back in 1960 and 61 they had I think they were called the Dare Devils or something. At any rate they had five or so new Fords each year and would run them over ramps, drive on two wheels, etc. It was really fun to watch, but the cars really took a beating.

The big name in Daredevils was Joie Chitwood. You can see some of the cars stunts in “To Please a Lady” Clark Gable and Barbara Stanwyck. Joie Chitwood III (grandson) is CEO 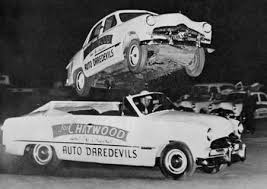 of the Daytona Speedway. Sheriff of Volusia County is Mike Chitwood but the Sheriff is not related to Joie.