I am looking at the vin number on a chevy equinox to look up recalls, the number starts 2GNA and then has an alien character that is not in the English set. It’s a sloping vertical line top left down to bottom right, at the base is a horizontal shorter line. It’s almost like an upside down capital T with a sloping vertical line. Any ideas what this is meant to be? I put it in to a chevy vin number website as an I or a t , both brought up the wrong vehicle.

Your title also has the vin number. Compare it to the vin tag.

From what I see, that character defines the series, and could be an “S”. Since “S” contains a sloping downward line right to left, maybe it is just the printer had a problem and only a partial “S” got printed.

I looked at the VIN on six Equinox SUVs advertised by a local dealer and the fifth character is an “L” on each. The letter “I” is not used in a VIN. 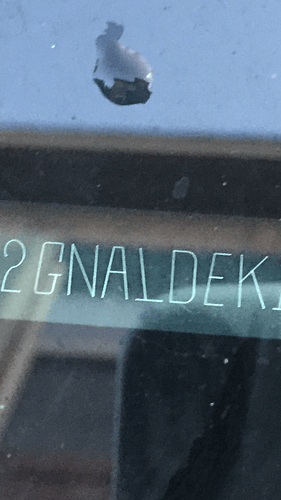 Those letters/numbers are very stylized, which leads to errors. A very bad decision on the part of GM.

That is not the place where you want stylized text, and they should have realized that !!!

Those letters/numbers are very stylized, which leads to errors. A very bad decision on the part of GM.

That is not the place where you want stylized text, and they should have realized that !!!

The stylized lettering for L may make it easier or more accurate for a computer to read.

Does your registration have the VIN number on it? I’d use that one.

The stylized lettering for L may make it easier or more accurate for a computer to read.

doesn’t matter, most of the time the number is read by humans, and that should be the most important. That “L” is definitely not readable by a human.

doesn’t matter, most of the time the number is read by humans

Not when the car is being built and THAT is the only thing that matters to GM.

I’d have to go up and take a look but seems to me they have a bar code under the VIN for computer reading. When you return a rental they just scan it without opening the door or anything. Maybe they have an RFID chip in it or something but think they just scan the VIN.

That looks like a printers mistake to me. OP should show this to the dealership next time in the area. I expect GM managements wants to know that a vin printer’s problem has made it to the field.

General Motors has been using that font for more than 20 years, better adapt to it. This is a 1995 Chevrolet; 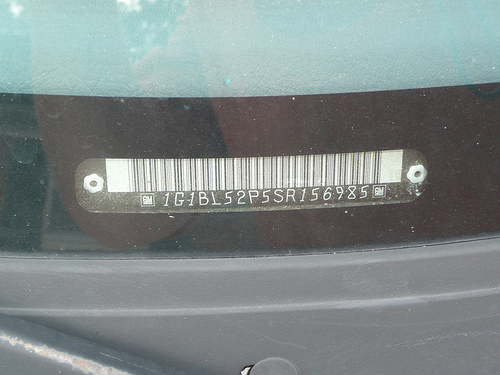 Depends on the brand of vehicle

When I’m doing smogs, I scan the vin bar code

On GM vehicles, it’s on top of the dash, I can scan through the glass

On Ford, I have to open the door, because the vin bar code is on the door post. They don’t have a bar code on top of the dash. Not any of our fleet’s Fords, in any case

I mentioned those 2 brands, because they’re probably the most common in our fleet

hmm … all the other characters are perfectly readable, a little stylized, but still not ambiguous at all what they are. I wonder why they did the weird thing just to the “L”. Had Nevada pointed the L thing out in his earlier post, I expect the OP would have found that helpful.

Then I may be mistaken but it was Ford rental that we returned and the guy scanned something and had my receipt before I even opened the door.

I think I read somewhere vins do not contain I’s or O’s. For obvious reasons.

I wonder why they did the weird thing just to the “L”.

Looks like GM doesn’t want any vertical lines in the VIN…probably for the scanner.