I’m watching all the James Bond films in order, looked the other day for Goldfinger, not available, but found a copy if “Gone in 60 Seconds” instead. The 1974 version, not the Nicolas Cage circa 2000 version.

It’s about auto theft. I’m not sure I understand their strategy. It appears they buy a junkyard version of a make/model they plan to steal, then use the vehicle ID labels from the junkyard car to disguise the actual VID of the stolen car. What I don’t understand, wouldn’t the engine and transmission numbers, b/c they didn’t match with the labels, be a problem?

BTW, not recommending this idea of course. Just watching the movie is all … lol …

Reality and the Hollywood world are like oil and water.

Yeah, it doesn’t seem like that idea could possibly work. I’m about 25% through the movie, pretty entertaining, but you have to ignore the overwheming 1970’s aspects to its look and feel, like the hair styles, bizarre attempt at presenting street language, etc. The production effects are a little amateurish, lighting and sound problem, but that’s to be expected for a first attempt at making a feature film. I watched the N Cage version at its first theatre run, maybe I’ll watch it again on DVD too. I don’t recall the plot in that one being quite so unbelievable.

It seems like when there is a movie redeux Hollywood seems to fluff it up quite a bit.

The original Red Dawn was very good and had a realistic feel to it. The redeux had them all looking like models and too many pyrotechnic explosions.
Same with Sum of All Fears. The book was fantastic; the movie not so much.

Reality and the Hollywood world are like oil and water.

Maybe I just don’t understand, but I didn’t think the VIN was stamped on the engine, but that the VIN info was linked to the original build’s engine and transmission serial numbers, which presumably ARE stamped on those parts.

Seems to me that’s why they started labeling sheet metal with the vin and moved the vin to the dash instead of the plate on the fire wall, I don’t remember when but our 86 had tags everywhere with the vin.

Engines and trans are not serialized.

The VIN on my truck is on a metal label in the area of the glove-box. There’s a paper label on a door jam too. My Corolla’s VIN info is on a label in the door jam area, and also in the trunk. There’s also a metal plate visible from the outside, but located at the top of the dashboard. I have no idea if or how the engine & transmission serial numbers are linked to the VIN number on either vehicle. Watching this movie, maybe that’s something I need to figure out.

The movie implies there’s VIN info under the car seats. I’ve never seen that, if it is there probably only visible by removing the seats.

It was common in the 60s and 70s for the car’s build sheet to be tossed in under the rear seat bottom. These days that is on a single sticker in the glove box or other obscure place.

I guess one verification for the correct engine/transmission for a Ford is provided on the casting stamp. Ford uses a casting stamp code based on the part’s date of manufacture. So if you found a engine casting stamp from 1969 in a 1962 Ford, you’d know it wasn’t the original engine. I think even the intake manifold on my truck has a casting stamp that ID’s it’s date of manufacture. As far as I know for parts like the xfer case and axles, that info is on a metal label attached to the part. That’s how I know my rear axle is a 4.11 ratio. (4.11 seems a little on the high side, I doubt I’d have ordered it that way … lol)

The stolen vehicle would have a rebuilt junkyard title, so any parts that aren’t the chassis or cab could be legitimately switched out. But they still wouldn’t want the actual stolen vehicle VIN to show, so they must have changed them somehow. They could also rebuild the junked vehicle to the point that it can be registered with a rebuilt title, and then switch it out with the excellent condition stolen vehicle after any inspections to get the rebuilt title were completed.

What I don’t understand, wouldn’t the engine and transmission numbers, b/c they didn’t match with the labels, be a problem?

Many 1968 and newer cars had the VIN or partial VIN/sequence number on the engine block and transmission.

While you are under a used car looking for serial numbers, the vehicle would be sold to someone else, and you would be escorted off the property. 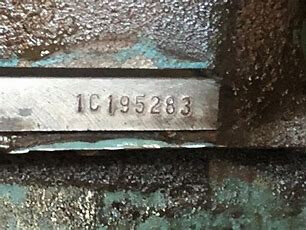 An episode of the 50s TV series “Highway Patrol”, had that plot line too. Crooks bought junk cars that had titles then transferred the VIN plate from the junked car to the matching stolen car.

I remember a poster here that bought a 3/4 ton diesel truck who found the VIN identified a 1/2 ton gas truck. He found out the truck was stolen and the VIN swapped. Unfortunately, he checked the VIN after he bought it. He lost the truck and his money.

I remember a poster here that bought a 3/4 ton diesel truck who found the VIN identified a 1/2 ton gas truck.

Wouldn’t the title have said 1500 or F-150 or such? I assume you are referring to the VIN on the title that they got with the stolen Diesel truck.

The truck had the VIN tag swapped TO a 1/2 truck but the truck WAS to all appearances a diesel 3/4 ton. The VIN matched the title but states don’t run the VIN for model, only theft. When the buyer did a CarFax, he found it to be showing as a 1/2 ton gas model and wondered if that would keep him from insuring it.

Our comments that it MIGHT be stolen turned out, sadly, to be correct.

Car thieves did do that and it works simply because the DMV doesn’t look under the hood. The buyers usually know they are buying a stolen vehicle and go along with this.

I finished watching this dvd, turns out the lighting and sound problems are mostly b/c the dvd was made from the raw film footage, and that had aged over the years , colors faded etc. At any rate those problems don’t detract from the film, mostly quibbles.

A distressing “extra” is that this film’s producer was killed while filming the sequel. Something to do w/a water tower accident. The sequel was never completed; however his wife became a major advocate and contributed to the circa 2000 the Nicolas Cage Sequel w/the same title.