I bought a new 2020 Ford Fusion Hybrid today and just realized that the saleswoman screwed two rear license plate screws into the rubber supports/bumpers at the bottom where the plate sits instead of into the two holes for the top of the plate. The screws wont back out of the rubber now and there are also flakes of what looks like paint/plastic around where she screwed them in with a power screwdriver. And some small scratches to the paint as well. I’m wondering if there was any damage done to the trunk beyond the destroyed rubber supports for the plate. Has anyone else had this happen? Brand new car and she power screws the plate in the wrong place.

I am not sure I understand your issue, so traded in my 03, salesman could not get the screws loose, rips it off, stomps on it to make the plate straight, and put it on the new car. Looks ok, we all have our stories, Pictures possible?

Go back to the dealership, go the the offices inside and start complaining. 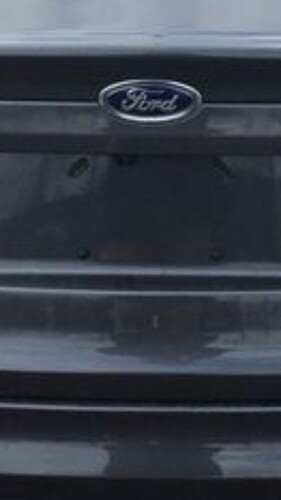 Screenshot_20201127-194834_Gallery1080×1920 105 KB
This picture is from the dealer site which still has the car up on their site. Those two small rubber nubs at the bottom of where the plate goes are supposed to go through the bottom plate holes and act as support. She screwed the two plate screws right into and through those rubber nubs instead of the two hole guides at the top where they are supposed to go. I’m wondering what additional damage was done.
DJO November 28, 2020, 1:04am #5

They are closed. I sent a message and plan to go back tomorrow. I’m sure they won’t think it is a big deal. But it is to me. She drilled screws where they were not supposed to go, causing damage.

"wentwest,
Go back to the dealership, go the the offices inside and start complaining.

Agree and in this case loudly( I don’t usually recomend this ) but it seems in order this time. A pet peeve of mine people who have to use a pair of plier’s with two hand’s should not have access to tool’s especialy power tool’s.

Well yeah she did it wrong. Now my take. To save about 75 cents some companies use just the two upper screws. I’ve seen many cars where the plate just flaps in the breeze. It should have four both top and bottom. So while you are at it, have them install two more sockets instead of the bumpers to secure the plate.

Has anyone else had this happen? Brand new car and she power screws the plate in the wrong place.

The chance that this has happened to someone else ? What does it matter , it happened to you so you talk to the dealer about it . And if it did the chance that person or persons seeing your post is really low.

They should fix it at their expense. Make sure you get a receipt for the visit no matter what the outcome is to document the visit. The reason for visit should clearly state your complaint.

It seems that the screws went completely through the rubber bumpers and damaged the paint. If the metal is exposed, it will rust. You want that repaired at their expense even if it involves repainting the entire trunk. Small damage sometimes grows in size because there is not a full break in the painted area. I had damage repaired at the back of my rear fender, and the repainted area went all the way up the rear pillar and along the roof line to the gasket between that panel and the windshield.

I also thought the front plate looked a little off so I checked and it is about an inch off center and not level. It is the dealer installed plate bracket/frame that the plate screws into on the front bumper of the car. And apparently this model (2020 Fusion Hybrid SE) only comes with two front floor mats? Even the Focus I had came with a full set of 4 floor mats. I think every car I’ve ever had came with all 4 mats.

If only two screws were used and they went through the upper holes on the plate to the lower holes on the bumper, then it is wrong, but now damage was done. The license plate can be reinstalled correctly but for screws should be used.

She screwed the plate into those rubber nubs…so what, is your plate hanging off your back bumper? I’m just having trouble visualizing this, since right below those numbs the bumper cover usually juts out several inches. If it’s what I’m thinking, it should look comically wrong.

As for floor mats, go check another car on the lot; I’ve never heard of that either.