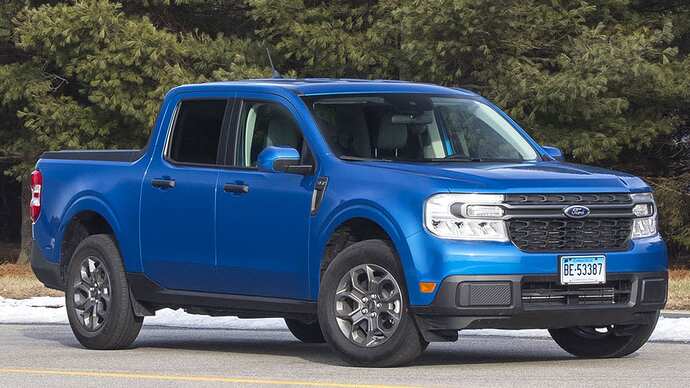 6 Things We Love About the New 2022 Ford Maverick

I’ve not been interested in a Ford, let alone a pickup truck, for a long time now.

But they’ve clearly got something figured out with both the Maverick and the F-150 Lightning.

As I was reading through the article, and it mentioned some of the “modern” creature comforts missing from the Maverick (heated side mirrors, push button start), I actually said out loud: “you don’t need that stuff anyway.” It just seems like new vehicles have so much stuff that’s become nice to have, but you really don’t need. But the manufacturers are happy to charge you for it.

it mentioned some of the “modern” creature comforts missing from the Maverick (heated side mirrors, push button start), I actually said out loud: “you don’t need that stuff anyway.”

The article referred to it as an “entry-level” truck, and I think that is what Ford’s intent was.
Even though I wouldn’t be interested buying one, I think that Ford will be able to sell a LOT of them… once the chip shortage eases-up.

I think it’s a great idea, the one thing I’d be concerned about is it being a new model. I still remember my father buying a K car because Consumer Reports liked it

And that’s fine. People should be able to buy whatever they want and/or can afford.

But to my mind, if they can cut out some of that stuff, like heated steering wheels and remote start, and save me, the consumer, on the price, well, sign me up.

As they get old I have a feeling the hybrid electronics are going to be hell. Add in all the sensitive luxury items and you better be able to afford a new one every time the warranty runs out.
If you can afford it then that’s great, if you can’t, then it will be a nightmare.

It says the entry price is $20k, but the one they tested (XLT, so not the top trim) was close to $30k…I wonder what a hybrid Lariat will cost?

Is this a unibody vehicle, similar to the Honda Pilot?

Kind of odd. Seems like they could just do a base model Ranger as their entry level truck. But, I have no idea what those cost now. I guess this one is really more of a crossover SUV with a bed (if it’s unibody).

I can’t really see it selling so well they’d stop taking orders, but I believe that’s what the article stated.

The 2022 run of Maverick is sold out . The current Ranger is too large and expensive .
The older Ranger pickups that were discontinued in 2011 are drawing crazy prices because many of us just don’t need or want a large truck.

You got it. A crossover with a bed.

I’m sure it costs a good bit less than a frame on body build.

The concept (cheap no frills truck) kind of reminds me of the Ford Courier, if you remember those.

Right, but does that mean what it once did, considering chip shortages, lower production right now in general, etc? I’m surprised there’s a huge demand. I mean the Pilot’s been around awhile and doesn’t seem to be a huge seller, for whatever reason. I liked the looks of the earlier Pilot better myself. Maybe I’m not alone in that.

Pilot may be a lot more expensive too. I really never checked.

I mean the Pilot’s been around awhile and doesn’t seem to be a huge seller, for whatever reason. Pilot may be a lot more expensive too. I really never checked

If we are discussing pickups, did you mean the Honda Ridgeline?
If that is the case, then–yes–the Ridgeline is much more expensive than the new Maverick, as is the Pilot.

Build costs are similar. Switching a factory designed to build body on frame vehicles to make unit body vehicles… Now THAT will make your eyes water.

Mustangman. You obviously know your cars so I believe you about the costs.
But just curious, I always thought one of the reasons ( weight & crashworthiness also ? ) for going from body on frame vehicles to unibody was costs. Was I wrong or have things changed?

we are discussing pickups, did you mean the Honda Ridgeline ?
If that is the case, then–yes–the Ridgeline is much more expensive than the new Maverick, as is the Pilot.

Sorry, I did mean Ridgeline.

I cringe thinking they could have picked a better name than a lowball car from the 70’s.

The name is reminiscent of something one step above a Pinto. I guess most people forgot.

Of course I confuse the Ridgline with the Pilot. So…”what’s in a name?”as they say.

There is a market for all three, Maverick, Ranger, and full size pickups. I would like to see the 2.7 V6 from the Bronco be an option on the Ranger.