My 93’ Lincoln Town car is leaking coolant. Originally I thought it was the water pump. It appears however, that it’s leaking NEAR the pump. It doesn’t look like the pump itself is leaking. My question is, is there a hose that runs through or very near the water pump that could be leaking? I can see the leak while it’s running and it is a pretty good leak, but it doesn’t hit the ground and is “puddling” right under where it’s leaking. So it’s hard to tell where it’s coming from. How should I go about getting to the hose? I can’t afford a mechanic and need my car for work. I wanna figure out what it is before I go taking things apart. Unless I have to. I’m no mechanic and any advice/insight would be appreciated and helpful. Thanks.

Water pumps have what are called weep holes. 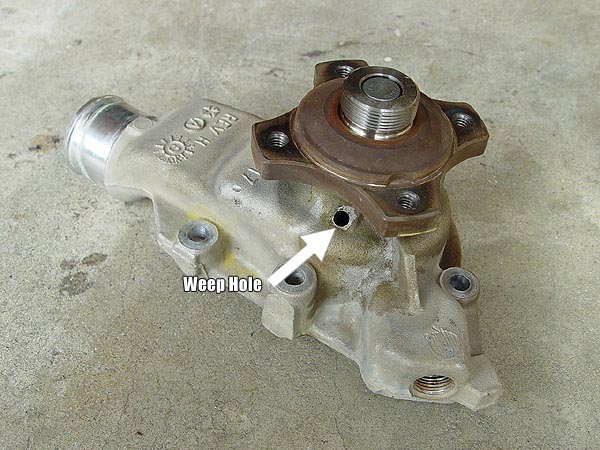 Make sure it’s not leaking from there.

Other than the weep hole, I’ve seen very tiny streams from a hole in the radiator or a hose spray a foot away…fooling you as to where the leak is coming from. Look real close.

Looking from underneath may help. Don’t rely on the jack! Use ramps, or carefully placed jack stands, or run the front wheels up a curb.

A UV dye kit for finding coolant leaks can also help.
The dye is added, the engine run, and a blacklight shown on the engine. The coolant leak path glow like a glowworm.

My money is on the pump. There’s a seal around the pump shaft that eventually wears out and begins weeping. Fluids migrate, and can fool you into believing their source is other than where it actually is.

I had a coolant leak I couldn’t find for a long time; it didn’t leak when it wasn’t running, didn’t leak quickly enough that I left a visible trail when I drove. I was really busy at the time so kept on adding coolant and stop-leak additives.

When my situation finally settled I figured out it was a seal in the water pump, coolant leaking out the ‘weep’ hole. I have a longitudinally-mounted engine so it was easy to change the pump; a new one was $27 @ the Zone of Auto. If you’re unsure, you can try plugging them up as a diagnostic; don’t count on the plug to hold, just as a way to tell if it’s the problem.