Stellantis is stopping production of the ICE Charger and Challenger. Sales of those two models as well as Mustang and Camaro are down dramatically. A Dodge EV muscle car is on the way in 2024. Are new ICE muscle cars toast? 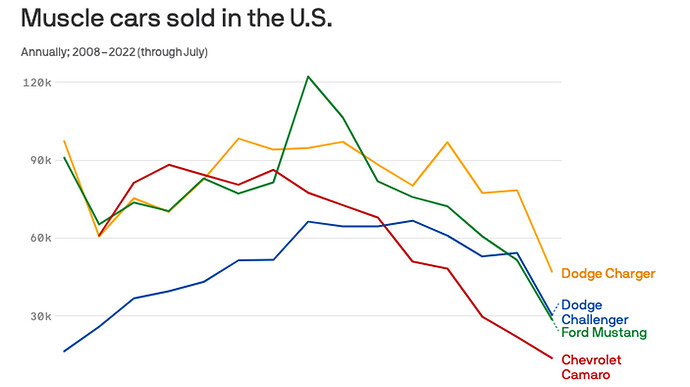 The gas-powered Dodge Challenger and Dodge Charger are being discontinued, though maker Stellantis hinted that they could have an electric future.

Well, considering the Charger and Challenger are based on an old E-class Mercedes platform that is now 30+ years old…it is time to retire them anyway.

As long as fuel costs are as high as they are, the V8 muscle cars will have soft sales. Chevy and Dodge have embraced variable displacement big V8 engines while Ford offers a 300+ hp turbo-4 in response.

Rumor has it there is a hybrid in the works for the new Mustang due in 2023. 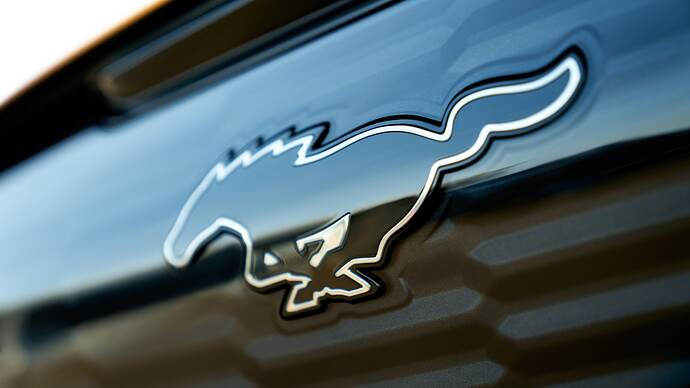 A Ford engineer's LinkedIn profile has tantalizing clues about the next pony car.

So no, I don’t think the muscle car is dead but I do see changes afoot!

I kind of wish that I had held onto my Ford stock, because I think this means that Stellantis is ceding the police vehicle market to Ford. GM doesn’t seem to have a significant share of that market anymore, and–in my area–police vehicles currently are roughly 60% Ford Explorers/40% Dodge Chargers.

Unless a lot of police agencies decide to go with a Charger EV, it seems that this lucrative market will mostly be Ford’s.

I did not read the article.
As far as Mustang sales being down. If there is no stock, would it not follow there would be no sales?

No gas cars soon.
Where is vette hybrid?
Don’t have much time

While I understand the logic, I really hate to see the original muscle cars become dinosaurs.

With national sales somewhere around 10% for electrics and mostly in California, it wouldn’t be the first time the big three have missed the market. I envision though charging stations being installed in the turn around s in Ohio, where the patrol like to wait in their new electric chargers. You’ll get a few extra second head start though while they unplug in persuit.

There are still plenty of “preowned” Dodge Chargers, Challengers, and other muscle cars out there for people to buy, race, and love. They aren’t going to magically vanish overnight.

I drive a Challenger R/T Classic with the 5.7L V8 myself. It’s a lot of fun…but I know cars like it are well on the way out. Big Auto wouldn’t be pouring money into EVs and batteries unless they were pretty darn sure the days of ICE are limited.

Or if the market is rigged.

It’s all one big conspiracy isn’t it @bing?

It’s really hard for me to accept that EVs are somehow being “forced” upon us.

Not when Ford got 200,000 preorders for the Lightning pickup…and they can’t build them fast enough. Same story with the Mach-E.

There must be at least a few consumers out there that are ready to make the switch.

In Minnesota dealers were being required to stock them but dealers complained that demand was not there. Big fight in the legislature and not sure who won at this point, or for how long.

At this point, I would say that high fuel costs are here to stay forevermore. Prices may decline slightly, as demand deteriorates, but will never reach pre-pandemic levels.

Therefore, it does not make sense for anyone other than law enforcement, contractors, and people who tow campers, RV’s, etc to own a gas-guzzling vehicle with an 8-cylinder engine. For the rest of us, a compact car with a 4-cylinder NA engine, or perhaps an EV is going to be the future.

Personally, I think Chysler/Stellantis would be better off reviving the Dodge Shadow and Dodge Neon than continuing to sell muscle cars. Even if they are unable to build these vehicles in-house, and are forced to resort to badge engineering. People need fuel-efficient economy cars now, and for the future. They don’t need 500 hp muscle cars.

They tried that with the 200 and Dart. It did not sell well and only lasted 3-4 years.

At this point, I would say that high fuel costs are here to stay forevermore.

I agree. IMO refiners won’t want to build new refineries or repair the least efficient ones because they are less likely to get a good return on investment. That’s probably why they haven’t started up facilities shut down during the height of the pandemic.

I think Chysler/Stellantis would be better off reviving the Dodge Shadow and Dodge Neon than continuing to sell muscle cars.

EV muscle cars are not that hard to build. I think Stellantis will build them. The article I referenced at the top said they will have one, probably in 2024.

EV muscle cars are not that hard to build.

Hot Rod magazine has been running some articles on their own home-brew EV muscle car design. Info is pretty interesting.

No new US refineries have been built in 40 years. Gov regulation is part of that, NIMBY is too. Might be easier to build a nuclear reactor than build a new refinery. They’ve upgraded the old ones to be more productive but not new.

this is the first charger that actually needs a charger

For one thing, here in California I just saw a report in today’s paper that charging stations (gasp!) often don’t work. So there’s that.

But about the head start, maybe, maybe not. Back in '72 I was sitting at a table in a Jack-in-the-Box in Victorville, CA. Directly across the street was a Chevron station and 2 CHP cars were refueling there. A guy in a '68 Camaro stopped at the stoplight there, revved his engine and laid a nice patch of rubber when the light turned green. Both patrol cars catapulted out of the station without unhooking their gas hose. A few minutes later I drove by a small mall (this all occurred at about 10:00 PM). The Camaro and both patrol cars were in the parking lot, the hood, truck and both doors were open on the Camaro and there were feet poking out from underneath the car. The driver thought he’d get a head start too; didn’t happen.