Hello. I am seeking an opinion/answer from an experienced member to an issue that I have with the alarm system on my [wife’s] car. Initially, car [2012 Toyota Camry LE] has problems with its electronics (head unit, instrument cluster, clock, etc) not powering on (sometimes dimmed for a second) when putting keys in and turning on the accessories. I thought that it might be due to car’s battery. So, I checked the battery, and it is good. Then I tried starting the engine a few times. Nothing happened for the first few tries. Then, the engine started and car alarm keeps sounding. Turned off the cars, but car alarm keeps sounding. Electronics is working now, and car alarm just doesn’t turn off: key fob doesn’t help, starting the engine doesn’t help… So, I disconnect the battery, and that shuts off the alarm. I started removing fuses that may be associated related to it (d/l alm, horn), but the alarm still sounding when I reconnect the battery. I removed all of the fuses, except the 30A ones, and it’s still making noises. I’m thinking that there might be a short somewhere… What do you guys think? Any suggestions are appreciated. Thank you. 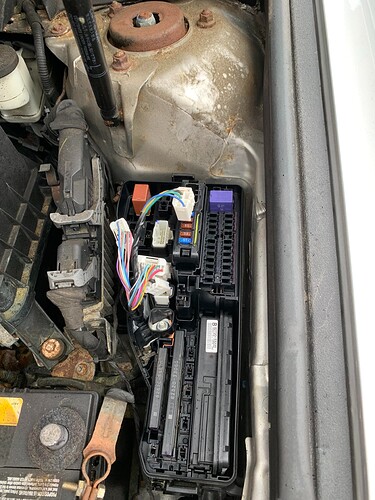 The BCM may be failing.

Where and when did you buy this car? Is it a salvage titled car?

The picture looks like it is a flood car based on the amount of rust on the strut mount and attachment bolts. Even rust belt cars don’t rust that badly on those parts.

If it is a flood car, there may be no solution.

Is the remote functional? Do the doors lock and unlock? Factory alarm or after market?

Where and when did you buy this car? Is it a salvage titled car?

Is the remote functional? Do the doors lock and unlock? Factory alarm or after market?

The remote is functional. Doors do lock and unlock. Not sure if it is a factory or aftermarket alarm. I took it to a repair shop to install a remote starter. The installation comes with an additional key fob that has a button for unlock, lock, and remote start… to the original one that I need to use to start the car.

The BCM may be failing.

Thanks. I’m going to read up more on this.

Your after market alarm/remote start is probably malfunctioning, BCM failure is very unusual.

The factory security system has an indicator light on the A/C panel. The factory alarm will deactivate with the remote or by switching on the ignition.

Your after market alarm/remote start is probably malfunctioning,

I second this diagnosis.

From looking at the picture, the first thing I would do is clean the battery terminals and the rust from the inside of the connectors. your battery may test good but if the connections are bad all the voltage might not be going to the rest of the car. the electronics will do weird things without the proper voltage.