Emissions
I have a 1995 Camaro Z-28. I went to emissions and failed all three listings. So had catalytic converter changed. Went again and passed first two test with flying colors but the third which is NOX failed max is 2.0 I went up to 2.8. I watched the tempature rise to 210 degrees. Failed again. So asked my mechanic. He said it is either your EGR valve or radiator. But he said if it was the EGR valve you car would not be running as well as it does. So I found a muddy color in my radiator so I decided to go from a one core radiator to a four core radiator knowing that it would cool it down. Changed all hoses, thermostat new antifreeze. Went again to the emission and it failed again. And it muddy color was in it but not built up just a slight bit. So what is wrong? and why is it over heating and failing. I am thinking of bypassing my heater and thinking that is where the mud color is coming from and is it blocked causing the over heating? Anyone have any suggesting or know what is wrong? Thanks!

The EGR system introduces a small amount of exhaust gas into the cylinders to lower combustion temperatures.

To find out if there’s a problem with EGR system, get the engine up to operating temperature. Place something in the tail pipe(s) to partially restrict the exhaust.

Take a vacuum pump and apply a vacuum to the EGR valve. This should cause the engine to stumble or stall.

If this doesn’t occur, there’s a problem with the EGR system.

Try checking the coolant for the presence of hydrocarbons.
You can confirm the results with cylinder leakdown testing.

My wild guess is that you have a blown headgasket.
That causes muddy coolant as the combustion gases are blown through the breech into the water jacket, allows overheating because (1) the HOT combustion gasses are adding heat to the cooling system faster than the system can dissipate it and (2) the breech can prevent the cooling system from being able to build to the pressure it needs to prevent boiling.

NOx? That may be because you have a cylinder overheating because the coolant cannot draw out the heat due to its being too hot or an air pocket due to the gasses being blown into the water jacket (nitrogen and oxygen atoms bond prolifically if cylinder temps get too high).

That makes since Tester. I’ll try it because I have no other ideas and that’s about the last thing I haven’t had tested.

I’m guessing this is an egr problem rather than a radiator or cooling system problem. 210 degrees is within normal operating temperature for most vehicles. Make sure the radiator fan is doing its thing of course.

It’s pretty common for the egr passages to clog up on older cars like yours. If that happens even though the valve itself may work, when the valve opens it won’t do anything to cool the combustion. I have to clean the egr passages on my Detroit iron Ford v8 truck every 5-7 years as a matter of course. If the vacuum pump test describes above doesn’t cause the engine to stall or run very poorly, consider that your egr valve may still be ok, just the passages need to be cleaned out. they tend to fill up with carbon over time. the passages I’m talking about are not in the valve itself, but in the intake manifold area, where the egr bolts on. On my truck there’s a 2 inch long spacer between the egr valve and the intake manifold, and that’s where the passages usually clog. I have to remove the egr to clean those passages. that’s a good time to check the egr valve is opening and closing upon application of vacuum, as it is easy to see it happening on the bench.

If your egr valve won’t hold vacuum when you hook it up to the vacuum pump gadget, the diaphragm has split and the valve needs to be replaced. Hold on to your wallet, they’re expensive little buggers. but that would explain the problem you are having.

If the problem isn’t the egr valve, you may have carbon build up in your engine creating hot spots. To repair that may require the cylinder head be removed. Before going that route, one idea, install a lower temperature thermostat. This may allow you to pass the nitrogen test, but on the downside, you may fail the hydrocarbon test; but there may be a thermostat temperature range where it will squeak by passing both.

When the mechanic told you it couldn’t be the EGR valve because the engine was running too good, he was wrong. In the era your car was made, when the EGR system clogged up, most vehicles ran better. It is not always the EGR valve though, any of the passageways feeding the EGR valve could clog up.

Are you using straight water in your radiator or a 50/50 mix of water and antifreeze. If you are only using water, you will get that muddy water.

I found this image by entering Dexcool sludge into my search engine.

OMG Dexcool sludge? switched to peak global my self, ready for the reign of terror supporting dexcool @Tester

There have been plenty of instances where the egr passages have been almost completely clogged shut with carbon, yet activating the valve caused the engine to stall and/or run rough

Thank you for the numbers

Personally, I would look further into the egr system. Remove the valve and check out those passages. Clean them out as needed. There are snakes which attach to your drill in case you need to perform that procedure.
Make sure the valve is functioning properly.

210 degrees coolant temperature is still within normal parameters. By the way, those gauges in the cluster aren’t always terribly accurate. If you hooked up a scanner, for example, it might show 200 degrees, whereas the gauge in the cluster might show 210. So, to sum it up, I don’t believe your engine is overheating

Also the EGR valve is in the back of the intake and in gonna be a bit hard to get it out. But I’ll do it as far as running a drill with a snake on it I think that’s another hard task. Id probably be better off removing the intake manifold and cleaning it out

I’ve used an old speedometer cable in a drill to auger out the EGR port in the intake. And then followed up with old E string from a bass guitar.

what type pf antifreeze do all of you think is the best to use in this Camaro? Instead of Dexcool to prevent sludge?

You shouldn’t be using Dex-cool

That is for GM vehicles model year 1996 and newer

Your vehicle is 1995 and thus wasn’t designed for it

Any of the universal/global antifreeze will work in the cooling system.

But the cooling system must be flushed to remove any of the Dexcool/corrosion.

This is the machine I use. 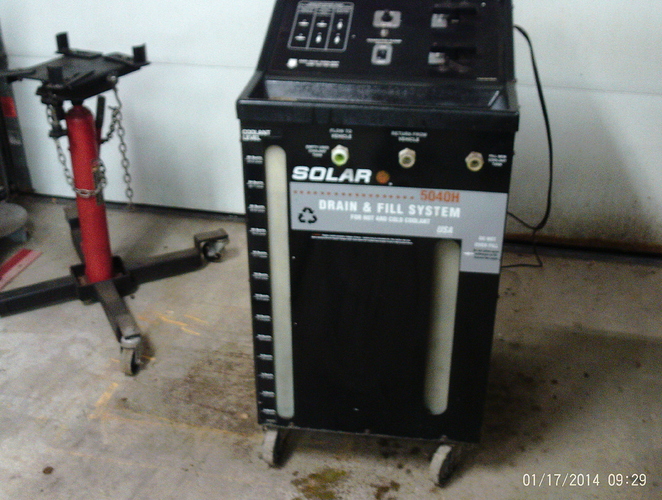