Needing help with bumper replacement. I need to know which parts I’ll need and if you have any external links like YouTube etc that could potentially help, that’d be great! Any help is appreciated!
Since I am a new user, it will only let me post one photo 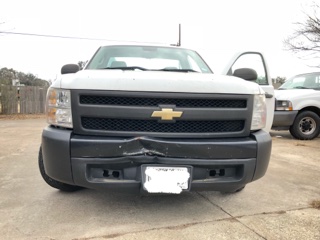 Well a body repair manual would show the diagram of how everything goes together and what it is called. The only way you’ll know what for sure is damaged is if you do a disassembly first. For sure you’ll need the upper and lower parts and maybe whatever is behind it and some fasteners. Best thing is to go to a GM dealer site with the diagrams and take a look to get an idea. A place like gmpartsdirect etc. should have the diagrams and the prices that you can order from. Or if you are looking for used, you can go to car-part.com for a regional or nation-wide search.

Of course the other thing you can do is go get an estimate from a body shop and they will list the parts that they need. Of course it may not be a complete list because they won’t know for sure until they pull it apart either.

You need to crawl under the front to look at the pistons on the bumper that deflect when the bumper is hit. If the impact I see severe enough, the pistons will be damaged.

I assume you’ll be paying it all, out of pocket?

How important is it, that it look perfect?

If it was me, and if it wasn’t crucial it look perfect, I’d remove the bumper and straighten it with our shop press. We have the same trucks at work, and the bumper “skin” is actually steel, so it’s something to think about.

Autopartswarehouse lists the bumper prepainted for $75.
I didn’t bother to look up the valance panel.

If it turns out to be just the bumper and valance panel, I’d just get replacements.
If the shocks behind the bumper are collapsed, I’d try boneyards.

Impact absorbing cylinders were used on cars in the 1970’s and 80’s, I have not seen them used on trucks and I have replaced many truck bumpers.

Whatever.
Why not help out and post an exploded view drawing of the current bumper design for this truck and the part numbers?

My help was pointing out that the impact absorbers are imaginary parts, the OP would be wasting time trying to locate them. 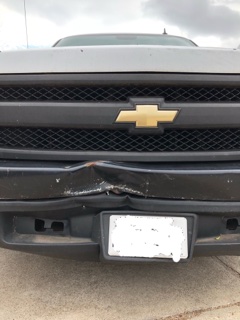 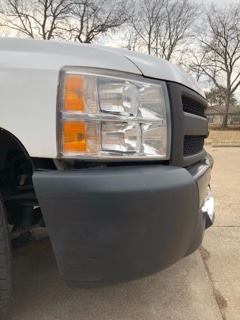 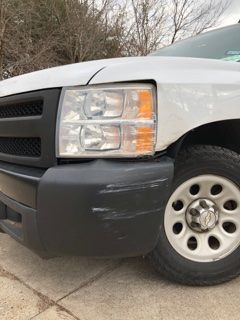 This is extremely helpful, thank you!

This is what I’ve found so far…am I in the right direction here?

That’s what I figured. You had and have absolutely no intention of helping solve the problem.
Pointing out that my reference to bumper shocks was incorrect doesn’t help the OP one iota. He’d have found what he needed when he looked up the bumper assembly parts.

Don’t bother responding. I’m not going to play your game with you.

Re: the photos, they’re a great help. It’s possible that the plastic corner pieces can be rubbed out with Armorall or something similar. It’s worth a shot. If it works, it’ll save some bucks. Try rubbing out both sides and they may come out even and with the white marks gone.

I believe those corner pieces are also painted metal

I’ve had fair luck with exterior body solvent. I’ve used it to remove “foreign” paint without causing any further damage.

But it looks like the headlight and fender might also have damage. It’s not clear if that happened at the same time as the incident which dented the center of the bumper

The headlight you might be able to buff out, but it’ll take a little more to get that fender in tip top shape

But it looks like the headlight and fender might also have damage. It’s not clear if that happened at the same time as the incident which dented the center of the bumper

Yeah, you’re right. I didn’t notice how out-of-whumpus that LF headlight was. Or the telltale wrinkle in the LF corner piece that indicates bent metal.

Hopefully the costs won’t be too bad. Other than the damage, the truck looks like it was kept in good shape, at least from what can be seen in the photos.

There are two different Silverados built in 2007. Because of strikes and other issues, the 2007 Silverado was not ready to go into production on time so a modified 2007 was produced called the Silverado Classic. The true 2007 model came out mid year. Yours is NOT the Classic.

It’s not just GM that has these situations

certain model years are harder to get parts for, because you have to provide lots of details

the 2007 Silverado was not ready to go into production on time so a modified 2007 was produced called the Silverado Classic.

These situations are perfectly normal in the automotive industry. The original Mustang in '64 was built on a Comet chassis because the dedicated chassis wasn’t ready. The '64-1/2 Mustang had the first dedicated chassis. Mid year changes and new models released on existing chassis because their dedicated hardware are/is probably more common than any of us even realize. In the modern world, that’s why when you go to the parts window to get a part the first thing they ask for is your VIN. The VIN, traced through modern configuration control systems, breaks everything down into the tiniest detail. Any change, no matter how minor, is reflected in the Bill Of Materials (BOM) or the parts design drawings listed in the BOM. The year, make, model, and options list aren’t sufficient for many parts.

The 64 and a half Mustang was the original Mustang. It was built on the Falcon/Comet chassis. Only the body panels were different.

The 64 and a half Mustang was the original Mustang.

LOL, I guess I only missed by a half a year! Not bad for me!